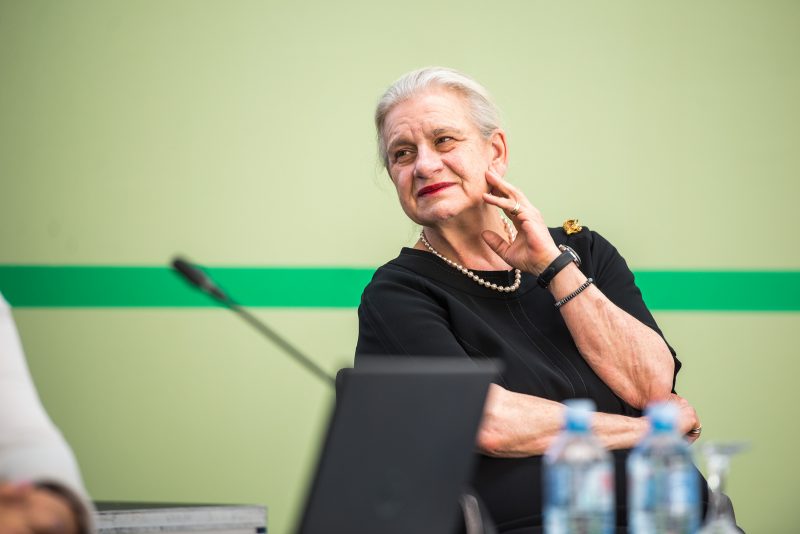 Borka Pavićević at the conference “Is there a chance for civil society in Macedonia?” held in Skopje on May 18, 2018. Photo by Vančo Džambaski, CC BY-NC-SA.

Influential Serbian playwright and anti-war activist Borka Pavićević passed away at 72 on June 30, 2019, in Belgrade, after falling ill suddenly. Civil society activists and cultural workers from all over former Yugoslavia have commemorated her outstanding legacy.

Borka Pavićević was the founder and director of Centre for Cultural Decontamination (CZKD), a Belgrade artistic institution established in 1994 whose mission was to fight the climate of nationalism, xenophobia, hatred, and fear running rampant during the breakup of Yugoslavia that fueled the latest round of Balkan wars (1991-2001).

Borka Pavićević [1947-2019] R.I.P. – A very dear and courageous friend, in so many civic struggles from the very beginnings and founder and leader of the #Belgrade Center for Cultural Decontamination and so much else… A very sad day https://t.co/LWHEAizQQ8

Pavićević's activism started during the 1968 student demonstrations in Belgrade. At that time, she was studying at Belgrade's Academy of Theatre, Film, Radio, and Television.

Writer Bora Ćosić remembered her from that time as a “rebellious girl with pigtails”, and described her as “the Mother Courage of Second Serbia” in the title of his eulogy, comparing her to the title character from Bertolt Brecht's anti-war play Mother Courage and Her Children.

For many years, Pavićević wrote columns on the newspapers Susret, Vreme, and Danas, and have had books of essays published. She was awarded the Hiroshima Foundation for Peace and Culture award in 2004, the “Ruts” award of the European Cultural Foundation in 2009, the “Osvajanje slobode” (Conquest of Freedom) award from the Maja Maršićević Tasić Foundation in 2005, and the Legion d’Honneur from the government of France in 2001.

The etymology of the female name Borka is linked to the Serbian words for “fight” and “fighter,” a connection that wasn't lost on the many of the people who paid tribute to Pavičević on social networks in the past week. The actor and activist Sergej Trifunović tweeted:

BORKA. You can view her through various lenses and think of her what you will, but one thing remains: Borka Pavićević was a persistent and honest fighter. Until the end. And at the times when I disagreed with her, I always respected her. Because I worked with her and for her and at her place, as a student and beyond.
She stood behind every human being. Always.

A few Twitter users from Bosnia and Herzegovina noted that she was one of the few voices in Serbia who dared to speak out against the genocide in Srebrenica. They have tweeted some of her quotes, like the one below:

“Once you start using euphemisms and lies for one thing, soon you continue using them in all other aspects of life. Therefore it's important that we talk in precisely and boldly, to name names and say it as it is — genocide.” – Borka Pavićević

BBC in Serbian noted that the Centre for Cultural Decontamination was the first institution who brought artists from Kosovo to Belgrade through the annual Festival “Mirëdita, dobar dan,” whose name is a play with the greeting “good day” as it's said in Albanian and Serbian. Her role in the process of reconciliation was remembered by Twitter users from Kosovo.

Sad news. Pavićević was part of the genuine anti-fascist intellectual scene in Belgrade & in the avant-garde of the real normalization of relations btw Albanians & Serbs. Among the pioneers in cultural & intellectual exchanges. https://t.co/CDaa627GBe

Croatian playwright Davor Špišić said that Borka Pavićević was not just a mentor, but “like a mother” to the rookie young writers and dramatists who started their careers in the late 1980s with the cross-national movement KPGT (Kazalište, Pozorište, Gledališče, Teatar). The name is a synthesis of all the words for “theater” in different South Slavic languages from former Yugoslavia.

The departure of Borka Pavićević to the far away galaxies left us empty, but also happy that we have had her in our universities. “Lack of reading is lack of Eros. And then it translates into lack of freedom,” she said in a TV show about books and reading. Goodbye Borka, you were our book.

While some Serbian right-wing nationalist trolls rejoiced Pavićević passing — with some doing a survey on whether she should be allowed to be buried in Serbian soil –, they were eclipsed by the outpouring of positive remembrances of her life, in the former Yugoslavia and beyond. Balkan actors, meanwhile, have vowed to keep working for maintaining peace, tolerance, and justice in the region.

#WBSummitPoznan session on regional #reconciliation is just starting. Reconciliation is one of the 4 original @BerlinProcess goals, and no progress has been made on it so far. The session starts with a long applause, instead of a moment of silence, in honour of Borka Pavićević. pic.twitter.com/KFI5z2bICd

The funeral took place on July 3 in Belgrade after cremation and singing of the old Yugoslav anthem.