Is cultural appropriation really just a harmless exchange of ideas? 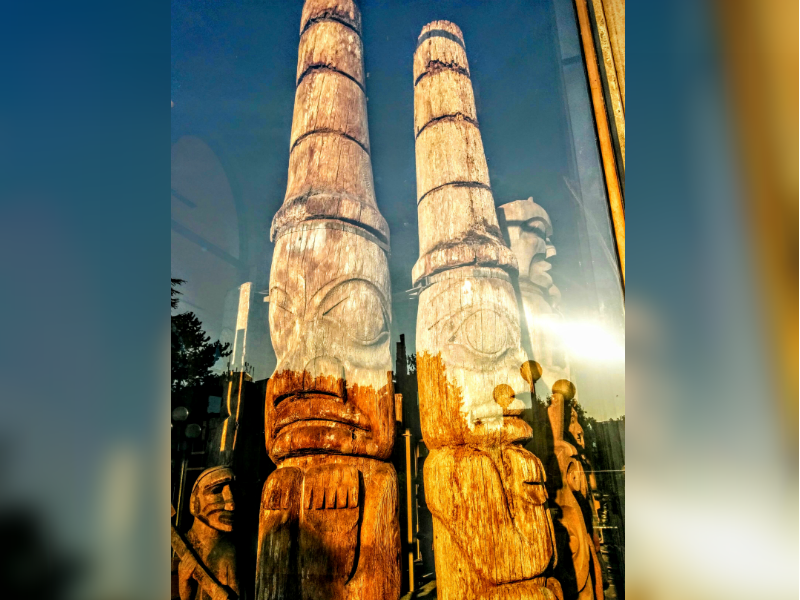 Memorial poles on public display behind glass at the Royal British Columbia Museum (RBCM) in Victoria, B.C., Canada. The poles are originally from SG̱ang Gwaay llnagaay (Ninstints, on Haida Gwaii) and date back to the 1880s. The poles were removed from SG̱ang Gwaay llnagaay and purchased by the RBCM in 1957. On the left, in the background, is a Quatsino “Potlatch Figure” from the community of X̱wa̱tis on northern Vancouver Island, was acquired by RBCM in 1911. Photo by Nevin Thompson.

Less than a week after Kim Kardashian launched a controversial new brand, Twitter declared victory and she was forced to retreat. Kardashian caused an international social media firestorm on June 25 when she announced plans to launch “Kimono”, a personal line of underwear, handbags and deodorant that had nothing to do with Japan's iconic and elegant traditional attire.

The biggest complaint was that Kardashian was engaging in cultural appropriation — as an American and a member of a dominant culture, Kardashian was co-opting the kimono from Japan, a disadvantaged minority culture in the context of the United States.

In my Twitter feed and on Facebook, however, not everyone seemed to think Kardashian was engaging in cultural appropriation. It was obvious, according to some people, that Kardashian's line of girdles and shapewear looked nothing like a kimono, so there wasn't much appropriation going on, if any.

Another argument was that, despite the fact the mayor of Kyoto wrote Kardashian a letter begging her to reconsider ‘kimono’ as the name for her new brand, most of the social media noise came from outside of Japan, and not from Japanese people themselves. One Japanese reporter had to explain the meaning of ‘cultural appropriation’, since the term (文化の盗用) is mostly unfamiliar to readers in Japan.

Just whose culture is being appropriated? And does cultural appropriation even exist?

This ambiguous aspect of the Kardashian kimono controversy brings to mind the Boston kimono protests of 2015. When the Museum of Fine Arts Boston encouraged attendees to dress up in a kimono and pose in front of Claude Monet’s “La Japonaise,” protesters called the event racist, colonialist, Orientalist and culturally insensitive — and a prime example of cultural appropriation.

It didn't help that there was a short talk at Monet exhibit called “Flirting with the Exotic”.

According to the Boston Globe, counter-protesters also attended the Monet exhibit in Boston in support of allowing anyone to wear the kimono. “We actually do not quite understand what their point of protest is,” said a senior official at the Japan Consulate in Boston (blogger Keiko in Boston provides a detailed and frequently updated breakdown of the controversy).

There was also the idea that Western exhibit attendees dressing up in the kimono in some ways replicated the ‘Japonism‘ of 150 years ago, when the Western Impressionist movement became infatuated with and influenced by all things Japanese.

Cultures borrow from each other all the time, right?

The convoluted nature of the two kimono controversies, where it's not entirely clear if it's Japan, as a “disadvantaged minority culture”, that's doing the protesting, makes it easy to dismiss cultural appropriation as something to get worried about. Different cultures “borrow” from each other all the time, much as the Impressionists were influenced by Ukiyo-e prints.

At least, so goes the conventional wisdom, judging by what I see on Twitter and on Facebook, and in various newspapers and magazines: “cultural appropriation isn't real“, and is just an example of an “incoherent and divisive” “toxic call-out culture” run amok.

I disagree. Cultural appropriation is indeed very real, and causes real harm, particularly in Canada, where I now live. 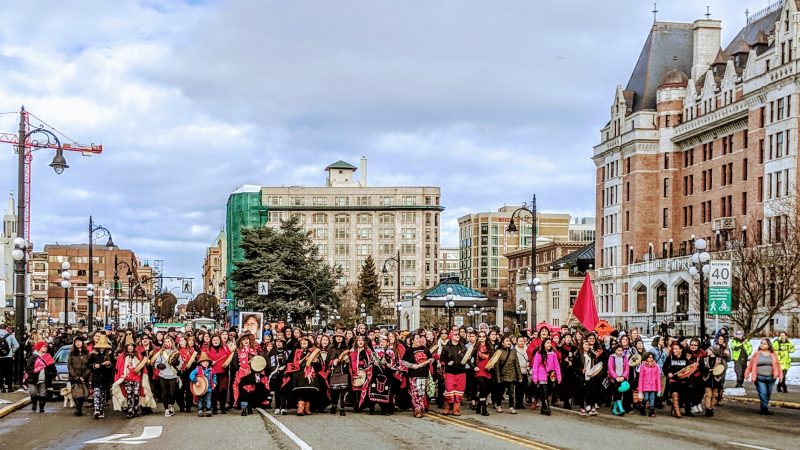 While, for members of a dominant culture, the concept of cultural appropriation can appear to be abstract (at best), in Canada the issue is often framed in terms the settler majority can understand: money.

Victoria, where I live, sits on the the traditional and unceded territories of the Lkwungen (Songhees), Xwsepsum (Esquimalt), and WSÁNEĆ (Saanich) Nations. Victoria is the provincial capital and a tourist town, and is home to the Royal BC Museum and other institutions. The museum houses an extensive collection of First Nations cultural artifacts, much of it salvaged, recovered or otherwise collected from Indigenous communities up and down the coast during the first half of the 20th Century.

Because of the presence of the museum, the geographic proximity of the Lkwungen, Xwsepsum and WSÁNEĆ people First Nations art forms a key part of Victoria's local identity. So much so that First Nations iconography has become a somewhat kitschy presence on the streets of Victoria.

You could say cultural appropriation is to blame.

In a recent Facebook post, Richard Hunt, a famed Vancouver Island carver, complained that the Royal BC Museum was selling “fake” First Nations art in its gift shop. The transformation of cultural artifacts into souvenirs for tourists was especially galling, since the part of the museum's mandate is to strengthen “relations with BC’s (sic) First Nations“.

In fact, according to the Times-Colonist, Victoria's daily newspaper, some of the First Nations designs that are sold in the museum gift shop have been licensed by the original creators. However, the licensing fees paid out to the creators are quite small compared to the sale price and business margins on the products for sale. It could be argued that this is a concrete example of cultural appropriation in action, practiced by the museum, which receives financial support from a provincial government that says it is focused on fostering reconciliation.

Is it cultural appropriation, or is it just plain theft?

An even more blatant example of cultural appropriation occured in 2017, when non-Indigenous Canadian artist Amanda PL was accused of copying the designs of famed Anishinaabe artist Norval Morrisseau. The similarity between Amanda PL's paintings and Morrisseau's iconic artwork, which itself draws inspiration from traditional First Nations art, is striking.

However, in this case, framing Amanda PL's artwork with the controversial term “cultural appropriation” merely serves to obscure the fact that she was engaging in intellectual property theft, a crime that settler culture in Canada takes very seriously.

Focusing the debate on the supposed absurdities of cultural appropriation has also helped Canada's cultural elites marginalize First Nations artists, writers and other creators. In 2017, at the very same time Canada was debating whether or not Amanda PL stole from Norval Morrisseau, there was yet another toxic argument about cultural appropriation.

In his preface to an issue of the quarterly magazine published by Writers’ Union of Canada devoted to the work of Indigenous authors, editor Hal Niedzviecki said he did not believe in cultural appropriation. After his preface sparked debate in Canada, Niedzviecki swiftly resigned. In response, members of Canada's media and literary establishment rallied to support Niedzviecki, launching an “appropriation prize“.

As the debate shifted to media personalities who argued about the hazy abstraction of cultural appropriation, the implications for the Indigenous authors who were supposed to have been celebrated in the Writers’ Union quarterly were never addressed. This erasure of Indigenous voice is not unusual in Canada.

You could say it's part of our country's DNA.

Appropriating — and erasing — culture has a long history in Canada

Here in Victoria, British Columbia, sometimes it's hard to see “totem poles” and other First Nations art as anything more than aesthetically pleasing kitsch or museum artifacts. This is by design. It's often argued that the epidemics experienced by First Nations up and down the Pacific coast in the 19th Century following European contact led to population crash and cultural decline, so artwork and artifacts such as totem poles needed to be literally appropriated and preserved in a museum.

However, at the same time, so-called potlatch laws in fact outlawed First Nations from practicing their traditional culture. While museums were displaying totem poles purchased by collectors such as Charles Newcombe in order to tell the story of First Nations cultures that were supposedly going extinct as part of a natural process, the government of Canada was actively trying to erase Indigenous culture.

So, while it may be easy to understand cultural appropriation in terms of dollars and cents, the end result of the practice in Canada has been cultural erasure leading to actual genocide. 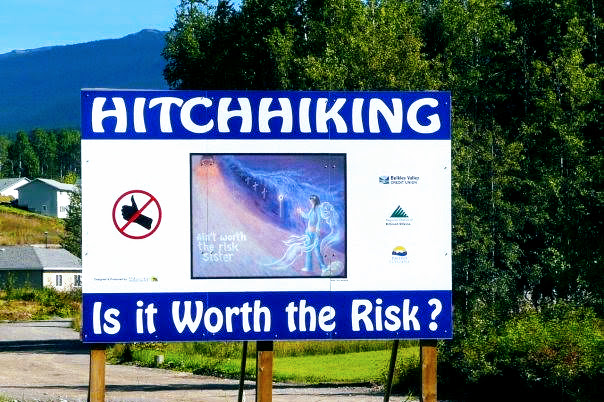 Billboard on Hwy 16 near New Hazelton, in northwestern British Columbia, from 2008. Photo by Nevin Thompson.

The connection between cultural appropriation and genocide

In June 2019, the National Inquiry into Missing and Murdered Indigenous Women and Girls (MMIWG) released its final report. Intended to help understand and provide solutions to the systemic, ongoing crisis of violence against First Nations, Inuit, and Métis women, girls and 2SLGBTQQIA in Canada, the final report once again sparked yet another controversy by identifying the violence against these groups as genocide.

While many columnists, politicians and others disparaged the idea that genocide had occurred in Canada, the report relied on an established international law that did not restrict the definition to physical destruction of a nation or ethnic group. Instead, the report defined genocide in part as “disintegration of the political and social institutions, of culture, language, national feelings, religion, and the economic existence of national groups, and the destruction of the personal security, liberty, health, dignity, and even the lives of the individuals belonging to such groups.”