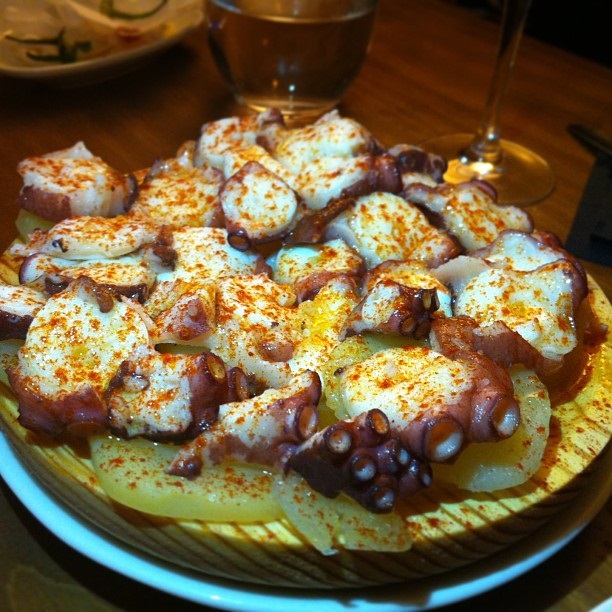 Pulpo a feira, typical Galician dish. Image on Flickr by demi, CC BY 2.0

In January 2018, the Spanish municipality of Narón, located in the autonomous community of Galicia, launched a unique challenge to its residents: losing 100,000 kilos collectively in two years.

One year on, the objective seems to be on the way of being completed. By February 2019, the population had lost in total 46,000 kilos.

With a population of 39,000, each resident will have to lose an average of 1.5 kilos by next year if the goal is to be met. The challenge's focus is the 15,000 overweight or obese citizens — or 40 percent of the town's population, according to figures of the Galician Health Service. The campaign's organizers hope this segment will lose at least 10 percent of their weight.

The campaign called “100.000 Motivos de Peso” [literally translated from Spanish as “100,000 Reasons of Weight”] was launched by mayor Marián Ferreiro along with 14 members of the Narón municipal council on January 25, 2018. The first step of the program was weighing all the municipal officers, who had then a joint weight of 1,174.50 kilos.

During the first months, the campaign promoted healthy eating habits and regular physical activity with the support from the city council, associations, schools, and the medical community.

Doctor Piñeiro says he has observed that sedentary lifestyles and obesity were common in the town. Those are two serious problems in a community where so many are overweight. He says that by August 2018 participants had lost an average of 2.5 kilos per month, although there wasn't official data available at that time. By then, the program had over 6,000 active participants.

Besides the health improvement for individual participants, there is an economic gain too, as healthier communities usually incur in fewer health expenses.

Thanks to this initiative, the community of Narón was awarded the European Prize of Obesity 2018 in the category Best Public Participation Program. Speaking with the press, Doctor Piñero noted that they were awarded for the “public projection of a collective initiative that brings together obesity-fighting, prevention, and solidarity.”

Indeed, the initiative has a solidarity aspect. For each kilo the participants lose, the Center of Solidarity Resources of Narón will receive an amount of non-perishable food or milk, “in order to establish equal health conditions [among the population]”, as the mayor Marián Ferreiro noted.

There are also precocious contributors, as doctor Piñeiro says:

A group of grandparents (…) asked us what we were doing in schools because their grandchildren refused to eat french fries. (…) [Children from Narón] are researchers of their surroundings and of the kind of diet their families have and how much they walk.

A focus on weight?

The campaign received some criticism for its focus on weight loss — although doctor Piñeiro has insisted the program is primarily about promoting healthy lifestyles.

For instance, Yolanda Cambra, who specializes in emotional intelligence, says cultivating healthy habits is more important than just losing weight. She wrote on her website:

But why not call it 100.000 reasons for health? When they focus on losing weight, they reinforce the wrong idea that associates thinness with health.

(…) The initiative, proposed by physicians in health centers, consists of several points, such as:

But this is not part of being on a diet, people. Eating healthily and keeping physically active should be the lifestyle for the whole population.(…)

I think it's great to see measures that aims to prevent overweight to turn into obesity. But using so cheerfully the terms “kilos” and “diet for losing weight” can have the opposite of the intended effect.

Meanwhile, Twitter users are also sharing the initiative and its results:

Thanks. We must stop this tragedy.

Narón, a munipality from Coruña, Spain, has proposed to lose 100.000 kilos in 2 years. And they go well. The power of Family and Community Medicine.

The HISTORY is Happening now. @motivosdepeso

Tweet: #Congress of #patients in @AreaUnoArrixaca. The #inhabitants of 1 #town decide to #lose 100,000 kilos in 2 years. The proposal comes from one #familydoctor in #Narón (#Galicia).

Headline on image: “Residents of a town decide to lose 100,000 kilos in a two-year period”