It is also illegal to host "news media" sites locally. 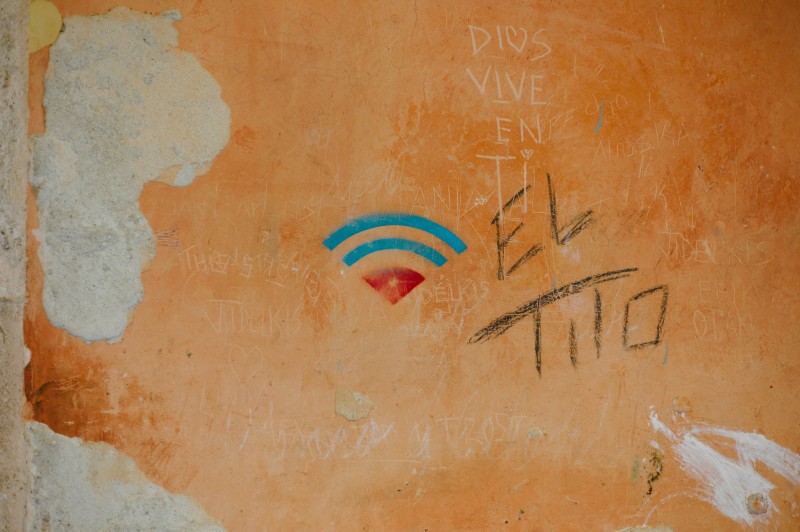 A WiFi symbol in Old Havana, Cuba. Photo by Nano Anderson, taken from Flickr under a CC License BY 2.0.

Cuban officials issued a decree law on July 4 that prohibits Cuban citizens from running websites hosted outside of the country. The law deals a heavy blow to Cuba’s growing independent media sector, where nearly all media sites and blogs take advantage of foreign hosting services and blogging platforms.

The law offers no details on its implementation — it is unclear whether it will affect people who use foreign-based social media platforms to publish their views — but Cubans say it presents at least two significant problems for any citizen who wants to run their own website. First, under the new rule, they will incur new costs. Hosting services in Cuba, which are provided exclusively by ETECSA, the country’s sole, state-run telecommunications provider, are more expensive than many foreign hosting services, and more than running a basic blog on a site like WordPress, where the minimum cost is zero.

The second and more worrisome aspect of the rule is that Cuban state regulations impose tight restrictions on which types of websites can be hosted in Cuba at all. According to item 27 on a long FAQ posted by ETECSA, publications that constitute “news media” cannot seek hosting on Cuban servers. Furthermore, for bloggers and others who write independent commentary, the rules prohibit content that “contradict[s] any provision of law or governmental act” or that could disrupt “public order.”

In a country where the media landscape is made up of three major components — state-run media, foreign press and wire services, and small but increasingly powerful local independent media groups — the new rule could put this third sector into long-term legal limbo.

“The law leaves independent media without ‘legal’ hosting options,” said local journalist and Global Voices author Elaine Díaz. “By imposing fines, they are criminalizing a decision that should not have any legal consequence.” Díaz is the editor-in-chief of Periodismo de Barrio, an independent media group based in Havana.

On Twitter, Díaz also criticized the fact that the law was brought in by decree, rather than undergoing discussion and scrutiny by the state assembly.

#NoMoreDecrees Article 68 affects any citizen who has a blog on @wordpress or a page on @Medium. It is a violation and it was not even approved by the [National] Assembly. Information policies should be decided by consensus, or they will be unjust and arbitrary.