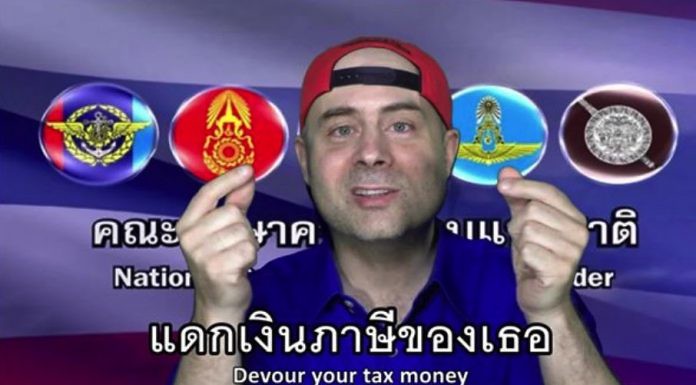 A French expat living in Thailand was forced to apologize and delete his viral YouTube music video which mocked the military-backed government's anthem.

On 10 June 2019, Yan Marchal, a video game developer who has been living in Bangkok for the past 15 years, posted a video on YouTube which satirized the anthem of the National Council for Peace and Order (NCPO). The NCPO was established after the military grabbed power in 2014. Although an election was finally conducted this year, the military still remains in control of government bureaucracy in the country.

The video titled ‘Junta Anthem Update’ is a parody of the song ‘Returning Happiness to the People’ written by General Prayut Chan-o-cha who led the 2014 coup and is still the head of the government. The anthem is repeatedly played on the radio and TV.

Instead of the lyrics “we shall act according to our promises,” Marchal replaced them with “we will break our promises.” Here’s an excerpt of the parody lyrics that poked fun at NCPO's promise to restore civilian rule:

The parody video got more than a million views on YouTube before it was removed on 12 June.

Marchal was surprised that his video became a viral sensation, and denied accusations that he was attempting to promote hate against his host country. In a Facebook reply, Marchal said:

…criticizing a government and a regime does not equate to hating a country. I love Thailand, I just don't love dictators and military coups.

Despite this, on 12 June he wrote another Facebook post saying that he decided to delete the video after signing a memorandum prepared by the police. He shared that police officers visited him at his home with the memorandum which he later signed out to avoid facing further legal troubles. The document is Marchal’s ‘apology’ for posting the video which ‘caused harm’ to the NCPO and Thais. Here’s an excerpt of the text of the memorandum:

I myself make a promise not to do this action and will provide on making an apologetic clip to say sorry to the NCPO and the people of Thailand.

One kind of attention I wish I would have gotten less of, however, is that of far-right activist groups who dug everything they could find about me on the internet (and that is a lot, as I have never been too keen on keeping things private). There were quite a few hateful comments, and even one person who posted the soi [address] in which I live.

[Note: The above cartoon features the word ‘farang’ which means ‘foreigner’ from a Western country in Thai.]

It's pathetic that the junta is so afraid of some inoffensive mockery that they send police to deal with it. Democracy remains far distant in Thailand. 6/6

The Thai junta obviously has no sense of humor since even the slightest ridicule can result in thuggish intimidation or threats of prosecution.

Other junta critics were also physically attacked by unidentified men in May and June which has alarmed human rights groups about the continuing threats against the right to free expression in the country.

This is the video of the anthem: