There are conflicting statements from the authorities about the censorship 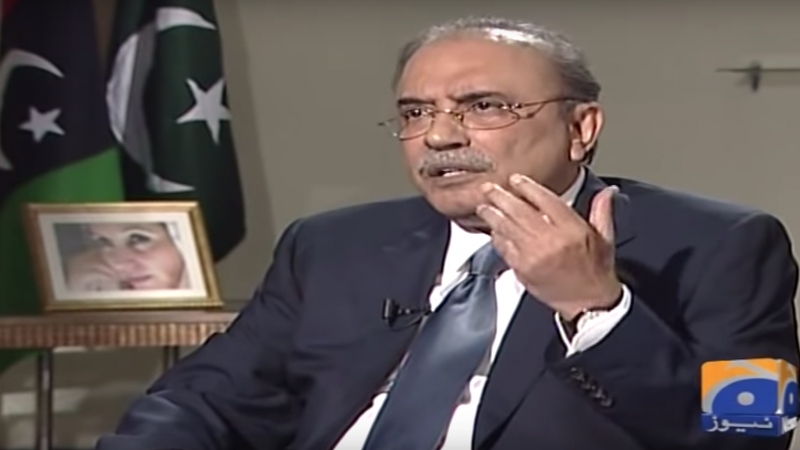 Asif Ali Zardari during an interview at the political talkshow Capital Talk in November 2018. Screenshot from YouTube video by Geo News.

A recorded interview of former Pakistan president Asif Ali Zardari, a lawmaker from the Sindh province, was taken off air shortly after its broadcast began on Geo News television on Monday, 1 July 2019, in another incident of censorship in the country.

The Pakistan Electronic Media Regulatory Authority (PEMRA) initially said that they had nothing to do with taking the interview off air.

However, according to Dawn, Special Assistant to the Prime Minister on Information Dr. Firdous Ashiq Awan subsequently said that the interview was pulled under PEMRA rules. She added that an under-trial individual who is in the custody of the National Accountability Bureau could not appear in an interview before cameras in parliament without the permission of the National Assembly speaker. However, her talk was in contrast with what Pemra is saying as its rules do not mention if an accused can or cannot be interviewed on television.

In a clip of the interview circulated on social media, the former president disclosed that a big scandal involving Prime Minister Imran was “about to surface”.

Zardari, a widower of former prime minister Benazir Bhutto and co-chairman of the Pakistan People's Party (PPP), was arrested last month in a mega corruption case. He’s accused of money laundering through fake bank accounts. In the interview, he defended himself against these accusations.

Interestingly, the prime minister has also tasked the Ministry of Law and Justice to amend the law on production order for lawmakers. A production order is a summon for a detained lawmaker to attend a parliamentary session. According to The Express Tribune, the Prime Minister does not want the speaker to issue production orders for parliamentarians accused of corruption.

Hamid Mir, the journalist who hosted the program, complained on Twitter about the increasing censorship.

I can only say sorry to my viewers that an interview was started and stopped on Geo New I will share the details soon but it’s easy to understand who stopped it?We are not living in a free country

Mir is one of the few journalists who despite being threatened, intimidated and even attacked, has not left Pakistan. He was shot thrice, with bullets piercing through his body, in 2014.

Can the media interview an accused?

While some journalists including anchor Rauf Klasra questioned if an accused lawmaker, who was out on a production order to attend a session of the National Assembly could be interviewed; others criticized the move and condemned the continuing crackdown on dissent in the country.

No offences pls but no where a top accused of money laundering,frauds & fake accounts is allowed one hour air time to justify his crimes. It only happens in Pakistan where an accused in custody of NAB on physical remand,appears on tv to give us lecture on democracy& transparency https://t.co/chqNY5UvN4

The Pakistani media has often aired interviews of individuals accused of corruption, treason and even terrorism. Former military ruler General (retd) Pervez Musharraf, who is now being tried under Article 6 for “high treason” was often interviewed on privately-owned TV stations. The former spokesperson of the extremist militant organization Tehreek-e-Taliban Ehsanullah Ehsan was also previously interviewed live on private television.

Selected government only wants to hear selected voices. President Zardari’s interview with @HamidMirPAK censored. Pulled from air when it had already started. No difference in Zias Pakistan, Musharrafs Pakistan & NayaPakistan. This is no longer the free country Quaid promised us.

Iqbal Khattak, a representative of Reporters Without Borders, told Global Voices that unless prevented by court order, journalists should be able to interview individuals facing criminal charges.

Similarly, the Committee to Protect Journalists (CPJ) described the incident as an infringement of freedom of the press.

“Why should a man accused, but not convicted, of a crime lose rights to freedom of speech?” Steven Butler, CPJ’s Asia Program Coordinator told Global Voices in an email interview.

As regards the legality of the issue there is no law that forbids airing an interview of a person under investigation esp when he is a key figure in national politics, a former president & elected from a constituency.
Rule of law is important and it will only strengthen the govt.

The press in Pakistan is controlled by both state and non-state actors.The country ranked 142 out of 180 countries in the 2019 World Press Freedom Index.

Journalists face intimidation and persecution, and those reporting on sensitive subjects often pay the undue price. Those who push back or are overly critical of authorities either had previously been subjected to threats of violence, kidnappings and even murder, or were driven out of their professions due to threats or dire consequences.

Authorities have also been accused of interrupting the distribution of newspapers, jamming broadcast signals of news channels and cutting advertising to media houses.

The withdrawal of advertisements led to a phase of economic insecurity for journalists, and on the pretext of ‘losses’, media owners carried out a ruthless retrenchment drive. According to the International Federation of Journalists, Pakistan’s media houses laid off nearly 2,000 journalist and non-journalist staff from May 2018 to April 2019. Intriguingly, the first ones to be expelled out were reporters critical of the government and the military.