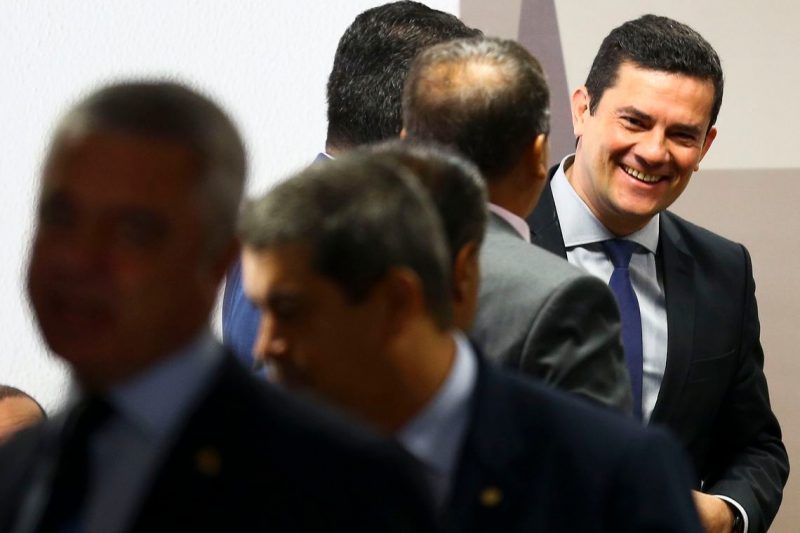 Moro during his nine-hour testimony to Brazilian senators about the leaked messages. Photo by Marcelo Camargo, Agência Brasil. Use allowed with attribution.

“URGENT: Car Wash's secret conversations,” read the e-mail subject that The Intercept Brazil sent to its subscribers on June 9, a Sunday, around 6 p.m. It was not a usual time for updates, even less for breaking news.

The Brazilian branch of the US news outlet had just published a series of stories revealing leaked private Telegram messages exchanged over the past three years between prosecutors and judges overseeing Operation Car Wash, calling into question the integrity of what is arguably Brazil's largest anti-corruption probe.

Since it was launched in 2014, the Operation Car Wash investigation has led to the arrest of dozens of high-profile businessmen, politicians, and lobbyists — as well as six former Latin American presidents, including Lula da Silva who represented the Worker's Party as president of Brazil from 2003 to 2010.

The Intercept Brazil's series shows that Sergio Moro, who in 2019 became President Jair Bolsonaro's Justice Minister, has advised and directed prosecutors throughout the operation. A federal judge stationed in the southern state capital of Curitiba, Moro has become a folk hero in Brazil in recent years after the Car Wash investigation brought down wealthy and powerful people on an unprecedented scale in Brazilian history.

In April 2018, Lula surrendered to the Federal Police after Moro handed him down a 12-year sentence for receiving a beachfront apartment in exchange for contracts with Brazil's state oil company Petrobrás. In August, a court forbade him to run for a third term just as he was leading the polls for the October 2018 vote, paving the way for second-favorite Jair Bolsonaro to secure a victory.

Leftist activists have long contended that Moro and the Car Wash prosecutors were driven by partisan politics and legal experts — many with no particular sympathy for the Worker's Party — have long disputed the evidence against Lula.

Now, The Intercept's leaks seem to support those reservations as they show that Moro colluded with the prosecutors all along. Chat excerpts show that Moro anticipated one of his decisions, suggested they replace a prosecutor that he deemed “too weak” before an upcoming hearing, and even recommended a potential witness who claimed to have evidence against Lula to the prosecutors. Legal experts argue this violates penal code provisions that ban judges from informally aiding either side of the process.

Glenn Greenwald, The Intercept's founder and Pulitzer Prize-winning journalist for his reporting on the United States’ National Security Agency spying program, has said that the chat history delivered to The Intercept's newsroom is a larger file than what was handed over by NSA whistleblower Edward Snowden.

Speaking with Global Voices, The Intercept Brazil's Executive Editor Leandro Demori spoke about his team's groundbreaking work and the stories that have now trended on Brazilian social media for weeks under the hashtag #VazaJato (a pun with the Portuguese word for “leak” and Car Wash's Portuguese name, “Lava Jato”). “What we are doing is what the Operation Car Wash always said they did: fighting corruption,” he said.

Without specifying a date, Demori said that the news outlet received a file from an anonymous source. To ensure protection, The Intercept doesn't reveal any details about the source or the format of the file. Demori said of the process:

It was all traditional reporting work, looking at documents, doing complementary reporting… I think that The Intercept was chosen by this source because we are recognised for doing that kind of work.

Demori highlights that earlier in 2018, The Intercept Brazil published an investigation into Rio de Janeiro's paramilitary militias and their links to politicians. He said:

I believe that The Intercept is seen as a place where there is a way of providing information with courage.

Moro and the prosecutor have neither denied nor confirmed the veracity of the chats. They have, however, contended that the messages were obtained through hacking, which is a crime in Brazil.

In a note released on June 9, the Car Wash prosecutors say their devices had been targeted shortly before the publication of the first stories, but The Intercept claims they had received the data long before the alleged attacks.

Whoever reinforces the invasion narrative is not The Intercept. The Intercept does not talk about hackers. Perhaps they imagine that this is missing context, but we can assure that the journalistic process was trustworthy when it comes to ethics. What is published is what was said, they are messages that can no longer be “unsaid” simply by challenging the context.

Part of Brazil's mainstream media has focused on the “hacker narrative”. Outlets connected with Globo Group, Latin America's largest mass media organization, have centered their reporting on the legal implications associated with the alleged attack, in detriment of the content of the leaks. Other large publications, such as magazines Veja, IstoÉ and Exame, also covered the case from a cybercrime perspective.

Telegram has denied that their servers were breached:

Telegram was not hacked. But there are other risks one should consider. See: https://t.co/KY2Rhzy3ei

Moro and the Car Wash prosecutors aren't strangers to the power of leaks. In the entire five-year history of Lava Jato, preliminary and official testimonies, secret plea bargain agreements, and even wiretapped phone calls were constantly leaked to the mainstream press, which helped galvanize public support for the operation.

An infamous case was in 2016 when Moro lifted the veil over a wiretapped phone conversation between former president Lula and then-sitting president Dilma Rousseff. The call suggests Dilma was about to appoint Lula as chief of staff so that he could avoid prosecution, as cabinet ministers can only be tried by Brazil's Supreme Court.

The conversation was broadcast on national television only hours after it had taken place, and protests erupted in many Brazilian cities right after.

Moro stood up for his decision to release the tapes more than once, claiming that their content was of public interest. For Demori, the media coverage has encouraged the public to believe that, when it comes to fighting corruption, the “ends justify the means”. When asked about the public's approval of Moro's decisions, despite its apparent illegalities, Demori said:

I think it's normal, it’s the game. Everyone has their personal motives.

In order to protect its sources, The Intercept doesn't give any details about materials they've received, when or how they've received them or if they were addressed to a particular reporter, as Demori explained in a recent radio interview. Speaking with Global Voices, he said:

We ensured that the files were kept in safe and secret places outside the country, and we took legal precautions. We were expecting a strong reaction, we prepared for truculent moves, especially by those who are the law.

The Intercept has now partnered with two other Brazilian news outlets — Folha de São Paulo and Veja — that are helping to dig into the material. Folha reporter Ricardo Balthazar said he was able to verify the messages by identifying his own Telegram exchange with a Moro assistant in the database.

“We have a newsroom in Rio de Janeiro, full of Brazilian reporters — 25, 30, 32 years old. They’re hearing your threats. Do you know what they’re doing?

Both Sergio Moro and Glenn Greenwald were called to testify in Congress about the leaks. Moro, who as Justice Minister oversees the Federal Police and refused to hand over his cellphone for inspection, was questioned by Senators for nine hours. He reaffirmed his public line of defense — that the messages were illegally obtained and although admitting that they were “partially authentic,” they didn't prove any wrongdoing on his part.

Greenwald spoke in the Chamber of Deputies. He was asked general questions about the case, the source, and the likelihood of The Intercept Brazil releasing audio files. The journalist has also faced derogatory comments about his family because of his marriage to a left-wing Brazilian congressman, and some pro-Bolsonaro legislators also suggested that he should go to prison for leaking private messages.

I testified for 6 hours yesterday at the Brazilian Congress about the exposés we've been publishing about Bolsonaro's Justice Minister and the prosecutors who imprisoned Lula. Several members of Bolsonaro's party threatened us with imprisonment. Watch one illustrative exchange: https://t.co/R2Hdg3zsnU

Demori said it was hard to gauge what's going to happen from now on. He compared the current story to Snowden's whistleblowing, the story that gave birth to The Intercept:

[In the case of Snowden], a technician who had the information forwarded the material to the journalists and gave them the ropes, explained the system and the content of documents — drew the map of the mine, so to say. In this case, we are working with chats and conversations. It is not a technical thing. Our newsroom is reading it. The work is more collective than individual.

He said he does not know what outcome to expect:

It's the Justice that will decide. They will judge. We know that there is a greater good, which, in the end, comes down fighting corruption.