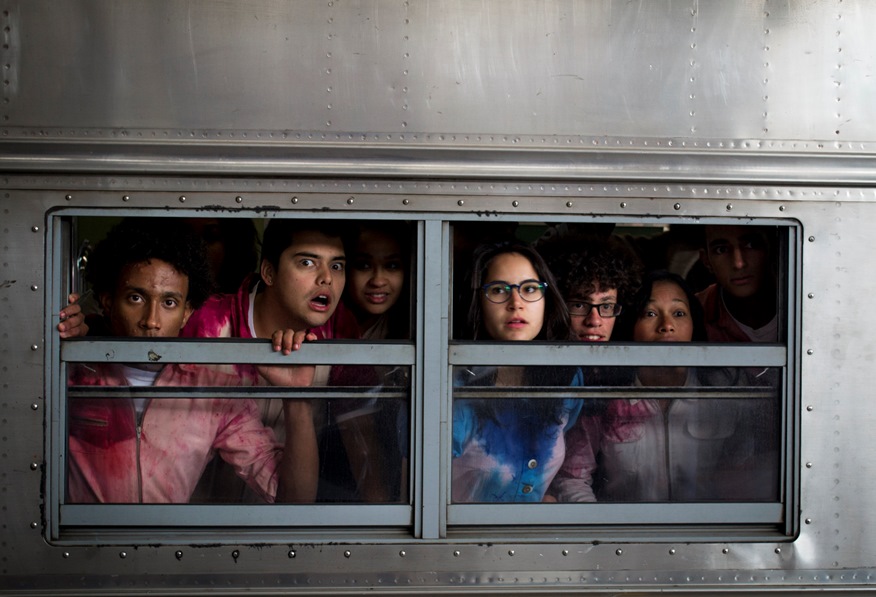 Play by Estopô Balaio company starts on the train and passes through neighbourhoods in the eastern area. Photo by Ramilla Souza, used with permission.

This article is published as part of a partnership between Global Voices and Agência Mural. The author is Priscila Pacheco.

In Heliópolis, one of São Paulo’s largest favelas, the trial of a black youth agitates the community, which argues for his innocence. In a train heading to Jardim Romano, an audio brings the history of the region to the passengers’ ears, and culminates with a final point: the rains and flooding. In the very south of the city, the body of a dead person is reanimated with Brazilian funk music.

These three stories, told in three stage plays, are representative of the theatre scene that has exploded in São Paulo in recent years.

The Heliópolis Theatre Company, Estopô Balaio, and Núcleo Pele are three different initiatives formed by people who live in the areas of the city where those companies are based, and who depict their neighbourhoods in the plays they take to the stage — or to the streets.

Miguel Rocha, 39, was 16 or 17 when he arrived to Heliópolis, a neighbourhood in the southeastern São Paulo district of Sacomã. He is originally from São Miguel do Fidalgo, in the northeastern Brazilian state of Piauí. Today a theatre director and producer, Miguel started to like the art when he was in school and saw a performance for the first time. It was the starting point.

In 2000, with the support of local community centres and residents, he created the Heliópolis Theatre Company.

Scene from the play (IN)JUSTIÇA, with a depiction of the Brazilian legal system. Photo by Caroline Ferreira, used with permission.

The director said that Heliópolis is like a working space from where they reap stories that involve both the city and the whole country. “The best thing about art is to always try to evoke the small microcosmoses that are linked to the whole”.

An example is (IN)JUSTIÇA [(In)justice, in Portuguese], a play he directed that was running this season.

In the plot, a black teenager kills a woman unintentionally when a gun fires by accident. From there, several questions arise about what justice is, if it is what is decided by the justice system or what is thought by society.

The text is by Evill Rebouças and was written in collaboration with the company. The show is guided by the question “what do verdicts not reveal?” which encourages reflection on Brazil’s justice system.

“(IN)JUSTIÇA starts from a narrative that in some way is about Heliópolis, it’s about Grajaú, it’s about the eastern area. They are stories that we are telling, that are close to people, much as they have a fictional side,” Rocha commented.

The group has 11 theatre shows in the curriculum and is headquartered in the Maria José de Carvalho Theatre House, in Ipiranga, a neighbouring district of Heliópolis.

In its plays, the company draws inspiration from afro-Brazilian culture, samba, funk, and urban culture. Miguel draws attention to the fact that some people view the city’s outskirts as lost or broken.

“This view that the outskirts amount to a shanty is wrong. There are, yes, very poor people. But there is commerce that generates income, there are people with the latest cars, with branded trainers. The outskirts are very diverse,” he said.

The floods, the train, and the Northeast

Itaim Paulista, in the Jardim Romano neighbourhood, is the base of the theatre group Estopô Balaio. It was formed in 2011, mainly by migrants from Rio Grande do Norte, a state 2,800 km away from São Paulo. Estopô has performed the play “The city of invisible rivers”.

The theatre’s director is the educator João Junior, 40. In 2010 he came from Natal, the capital of Rio Grande do Norte, another northeastern Brazilian state. He went to live in Barra Funda in the west part of São Paulo and started to work in an education centre in Jardim Romano, in the east, where he met many northeasterners like him.

He wondered at how the northeast region was alive in the country’s largest city and observed the territorial changes on the long route from Barra Funda to the Sao Paulo’s eastern part. “It was my big question: the territory that separates us and creates cities within the same city”.

He moved to Jardim Romano and lived there for four years. He set up Estopô Balaio with other artist friends who also came from Natal and the involvement of the broader community.

This year they again ran “The city of invisible rivers” which ends the Trilogy of the Waters, started in 2012, which has stories involving floods in the region.

“‘The city of invisible rivers’ tells the history of floods the neighbourhood’s residents have lived through. The stories are told locally on the streets of the region, and incorporates street dance, rap and graffiti. The beginning is on the train line, which passes through the neighbourhood.”

Jardim Romano is a neighbourhood on the banks of the river Tietê. It made the news unfortunately for having been left under water for three months following a flood in December 2009. For that time, residents had to walk in dirty water up to their knees or even waists.

Water is a recurring theme in Estopô Balaio’s productions, as well as the northeast region and the train. “All this city route is by train. It is on the train that people live together without knowing it. It's where you enter with a fatigued body,” he explained.

Funk and theatre in the streets of Grajaú

The set designer and actress Aline Domingos de Oliveira, 23, began doing theatre in 2013 with a project by São Paulo city council which carries out artistic training in schools.

When she liked the course, she invited her friends from the Catholic church she attended. Then, the Núcleo Pele company was born, in Grajaú, in the southern area. The first play was presented in 2015 with the title “The skin of work.” To reach a wider audience, they performed close to the street market at the time when people usually left church and went shopping on Sundays.

According to Aline, doing street theatre is a challenge: “It's a big struggle, because it's the car passing by with a loud noise, the child crying, the bar playing that forró [music style]. Because the outskirts is liveliness. Things happen,” she explained. 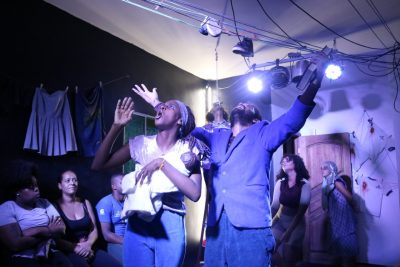 Scene from a play “Pancadão [music]! The party goes on?”, a mother complains next to a pastor that her children cannot sleep because of the noise of the dance. Photo by Bárbara Terra, used with permission.

“The skin of work” talks about the worker and exposed the difficulties of everyday life, such as riding the crowded bus and train, and the double workday experienced by women, as well as the oppression and abuse. “People were saying, ‘Wow, that's cool. I've never seen that, it’s talking about our life,” she said.

This year, the group presented their second show. The play “Pancadão! The party goes on?” was performed until the beginning of May. Pancadão is a type of Brazilian funk.

The plot was a funk party that had already lasted for three months. During this time, one person had died, but the body was still moving thanks to the music. The residents had to decide whether the dance would continue or not.

Aline contends that in the outskirts there is an artistic power. “The outskirts produce a diversity of art. Each one in a niche, but all producing it.”