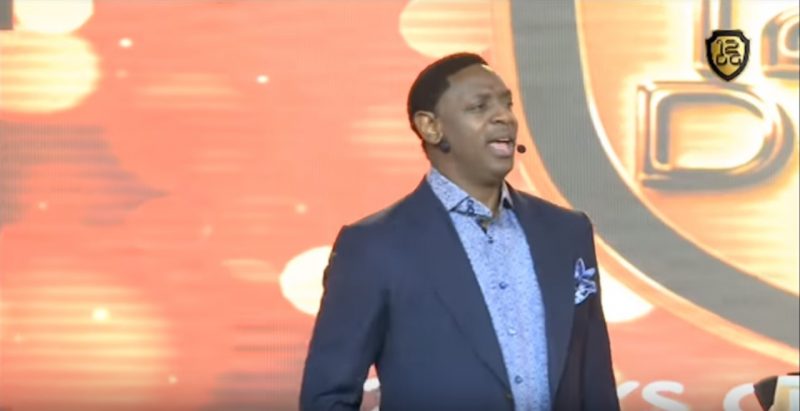 Biodun Fatoyinbo, the lead pastor of Commonwealth of Zion Assembly (COZA) has been accused of rape. In a two-part interview with YNaija, published on YouTube on June 27 and 28, respectively, Busola Dakolo — a celebrity photographer — accused Fatoyinbo of forcefully raping her as a 16-year-old teenager.

Dakolo was a member of Fatoyinbo’s Divine Delight Club, a youth club that later morphed into COZA, based in Abuja, Nigeria. Dakolo revealed that during one of her vacations as a high school student, she started attending Divine Delight Club. Soon after, Fatoyinbo offered to mentor her as her “spiritual father.”

Busola said that Fatoyinbo raped her, first at her parents’ house and later at a secluded spot in Ilorin, Kwara State, north-central Nigeria. Dakolo told YNaija:

Busola’s husband, Timi Dakolo – a Nigerian Gospel singer – claims that Fatoyinbo has repeatedly abused young women who are “sometimes chased out of the church or paid off to keep silent about the outrageous happenings in the church.” Timi Dakola showed public support for his wife with a poetic Instagram post, praising Dakola for finding her voice and coming forward with details to confront the pastor.

Akah Nnani, a Nigerian actor and COZA member, has asked Fatoyinbo “to step down from the position of senior pastor:”

Dear @biodunfatoyinbo The next thing to do sir, is. But I know you know this sir, and the church is in fact already making arrangements for this because anything contrary to this would be unconscionable, corrupt and anarchical. In proper states, governments, working systems, businesses and organisations even in the circular domain, the leader in question will step down first. INNOCENT OR NOT.

Fatoyinbo leads a congregation of about 5,000 worshipers and maintains a flamboyant lifestyle as seen in his “heaven can wait” choice of luxury cars. Unlike other pastors, Fatoyinbo regularly dresses in top-notch designers. In 2016, he celebrated his birthday at the 7-star Burj Al Arab hotel in Dubai and later held an all-white yacht party.

Fatoyinbo is not new to controversy.

Ese Walter, a lawyer and radio broadcaster, revealed that she had sex with Fatoyinbo for a week in London in 2013.

Walter described her affair with Fatoyinbo as “a form of abuse.” She says Fatoyinbo gained her trust over a year-long period when she attended his church before she traveled to London to gain a Masters degree.

According to Walter, the sex occurred after she was invited by Fatoyinbo to his hotel room during a visit to London, during which he offered her alcohol. For most Evangelical Christians, taking an alcoholic drink is anathema.

Fatoyinbo dismissed Walter’s accusations and promised to give a “robust response,” a promise not yet fulfilled. Fatoyinbo’s sexual scandals are problematic but seem to point to the megalomania prevalent among some Evangelical churches in Nigeria.

Due to public outrage, Fatoyinbo has taken “a leave of absence from the pulpit of the church” in order for his spiritual mentors “to consider all the issues raised” against him.

A mass protest on Sunday, June 30, in front of COZA headquarters Abuja, took place under the banner of #ChurchToo — a local adaptation of the global #MeToo movement:

To everyone who defied all threats and insults to join today's march, THANK YOU!

IT'S JUST THE BEGINNING!

Our work is undone until justice is served and the church is sanitized against sexual predators.

It will in the course of Next Week Sir. I’m sure by Sunday we will have at least 50 victims ready to testify publicly and anonymously. The only reason Mrs. Dakolo went public was because some elements were slot-shaming her despite all she went through & had kept to herself. https://t.co/reuw8vNOgj

Evidence of an endemic rape problem in Nigeria?

It is daily evident that our country does have a Rape Epidemic problem. It must be tackled swiftly. The Police & Public Prosecution must take the lead to seek Justice for victims&signal deterrent. Thanks to @ProjectalertVaw @MirabelCentreNG @StandtoEndRape for the heavy lifting.

Clearly, not everyone in the Evangelical community agrees with Fatoyinbo's behavior. Evangelical Nigerian preacher Tony Rapu has these wise words about abuse, survivors and the church:

Abuse is not just a sin. It is also against the law in many countries. As we have seen in cases globally where there is an attempt to cover up abuse, it is usually in a bid to avoid a scandal. Unfortunately, this produces a system that empowers and protects abusers and in the end it is the abused, particularly minors, who suffer.

We need to be more concerned about dealing with sexual abuse in a way that cares for survivors and demonstrates justice rather than with the fear of what a scandal might produce. We must recognize sexual abuse as a sin but also something that goes beyond the jurisdiction of the Church.

There is a sense of not wanting other people to know. We don’t want to air our dirty laundry in public. But we must never pressure survivors into forgiveness. Yes, we do need forgiveness; but we must not use forgiveness to undermine the severity of sexual abuse and keep survivors quiet.