"Sanitary pads are not a luxury but a necessity!" 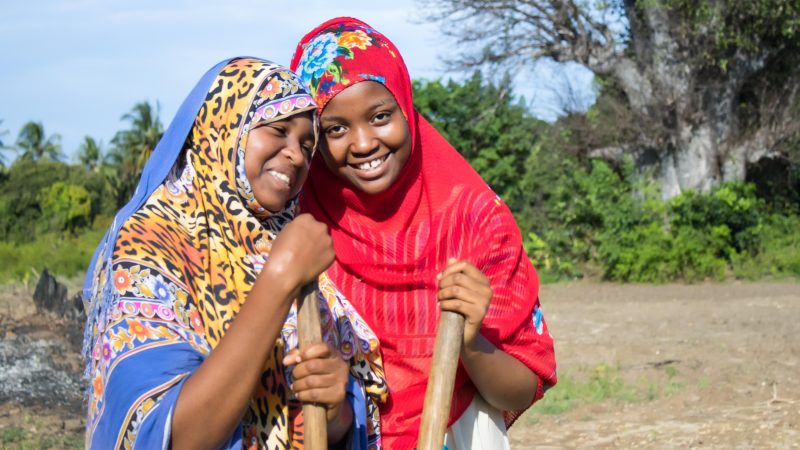 Young farmers in the village of Kangagani in Chakechake Pemba, pose for a photo on October 31, 2017. Tanzania's recently reinstated sanitary pad tax disproportionally impacts girls and women in rural areas. Photo by USAID in Africa via Flickr, in the public domain.

On June 13, Tanzania’s Minister of Finance and Planning, Phillipo Mpango, announced the decision to reinstate a tax on sanitary pads in the 2019/2020 budget, triggering a major debate on the impact this tax will have on girls and women.

His recent announcement sparked public outrage, especially from women who see the tax as gender-based discrimination. The minister explained that the tax exemption implemented last year had not achieved the intended effect — to enable access to sanitary pads at affordable prices and therefore ensure “better menstrual health management.”

But the exemption did not reduce the retail price of sanitary pads — instead, it allowed traders to raise the rate of pads and increase their profits.

The minister stated that with this budget, the government will reduce corporate income tax by 5 percent — from 30 percent to 25 percent — for investors who manufacture sanitary pads locally. The purpose is to attract investors, create employment opportunities for locals and reduce dependency on imports of menstrual sanitary products.

The price of periods

The sanitary pad tax announcement comes months after the Deputy Minister of Finance and Planning, Ashatu Kijaji, hinted that it was a possibility. On April  23, the deputy minister explained that her ministry had received complaints from consumers that sanitary pads were still highly priced. She insisted that the ministry was looking for better options that would benefit both women and the government, and mentioned the sanitary pad tax as a possibility.

Earlier this year, Ummy Mwalimu, Minister of Health, Community Development, Gender, the Elderly and Children, stated that her ministry had received letters urging the reduction of high prices on sanitary pads.

The average cost of having a period in Tanzania is 36,000 Tanzanian shillings or 15.63 United States dollars per year.

In response to these complaints, Mwalimu wrote letters to the Ministry of Finance and Planning and the Ministry of Trade and Industry, requesting them to direct manufacturers to reduce the prices on sanitary pads.

MP Peneza then requested a sit-down between the government and stakeholders to discuss how sanitary tax exemption can reflect the needs of consumers instead of rushing to reinstate the tax:

We met with the distributors and traders of sanitary pads in this country and these traders, with illustrations, informed us that they had reduced prices. The problem was on the retail end, that is where the pricing has not been reduced.

In her speech, MP Peneza's said:

The government has considered women’s opinions, it has considered Tanzanians’ opinions, it has considered the opinions from members of this parliament and that is why the tax was scrapped. Let us go back and sit down with the stakeholders dealing with sanitary pads, from distributors, consumers and other organisations so we can figure out how this reduction can benefit the citizens. However, rushing this is not right. In 2016, I said that exempting tax alone is not enough. However, the government must come up with a system of how to protect the interests of consumers. This was my move in 2016, this was my move in 2018 when I contributed on this same issue.

Various parliamentary leaders also spoke against the reinstatement of the sanitary pads tax. Zitto Kabwe, MP representing Kigoma Ujiji, argued that menstruation was biological and taxing sanitary pads was an injustice to women.

Special Seat MP Sonia Magogo said that one year was not enough time for the government to conclude that restricting distributors and traders to adhere to price controls was impossible.

I totally oppose the reinstatment of the sanitary pad tax if it's only been one year since the tax was scrapped. In my view, it's [too] short [of a] period to assess whether or not it's possible to restrict traders to adhere to the prices the government wants.

MP Magogo went on to say:

If the government was successful with EDF machines, plastic bags and business IDs, I do not believe it would have been unable to control traders over such a sensitive issue to women. No woman chooses to get her period, whether she is extremely poor or wealthy.

Many women and girls, especially in rural regions, cannot afford sanitary pads and have to live without them. Dhalia Mbaga, a health specialist, cited studies that show 91 percent of shops in rural areas in Tanzania do not even sell pads and “affordability remains the biggest challenge,” according to the Daily Nation.

Period poverty is one cause of absenteeism among schoolgirls in rural areas. Some girls have never seen a sanitary pad and at times, one pad is cut in half to share among two girls. Most times, schoolgirls in rural areas use inappropriate and unhygienic materials such as rags, raw cotton and maize cobs, according to surveys conducted by SNV Netherlands Development Organization.

In an editorial for The Citizen, writer Anna Bwana supported the use of reusable menstrual products such as cloth pads and menstrual cups because they last 3 to 10 years.

However, in rural areas, where period poverty is prominent, a shortage of water and sanitation makes it difficult to care for these products.

‘Pads are not a luxury’

Campaigners and netizens have taken to Twitter to express their outrage and advocate against the sanitary pads tax with the hashtag #PediBilaKodi [meaning #PadsWithoutTax].

Join the campaign to fight reintroduction of taxes(VAT) on sanitary towels in Tanzania. Periods are natural and we should not be punished for that! #PediBilaKodi pic.twitter.com/50CLWJocZY

Some men on Twitter have shown up as allies who have not shied away from the controversial levy issue:

Taxing women sanitary pads means taxing Women Menstrual Period. This is the most shameful act a government can do to its population. Any sensible & responsible MP would not entertain this. #Magufuli govt should feel ashamed to table this in Parliament for approval.#PediBilaKodi

“If Tanzania had 50% of women in the parliament!!! Would taxification upon menstrual sanitary pads exist?”

-Tanzania needs more women in the next presidential term#PediBilaKodi pic.twitter.com/Tac4dbwu3V

Still, the issue clearly impacts girls and women’s lives. One netizen reminds the world that menstruation is not a choice:

Last year, the Govt removed VAT exemption on sanitary products. This year, it might be added back on. Let’s not move backwards. We want to see #PediBilaKodi – menstruation is not a choice, these are essential products for all women and girls! @MHDay28May @AfriCoMHM

Sanitary pads are not a luxury, says this netizen:

I can't really stress this enough; Sanitary pads (products) are not a LUXURY but a NECESSITY!!! #PediBilaKodi #ItsTimeForAction pic.twitter.com/az8Heyd1Am