Playing against patriarchy: Muslim girls in India own the ‘male Space’ by playing football

In Kolkata, Muslim girls play football to fight against patriarchy 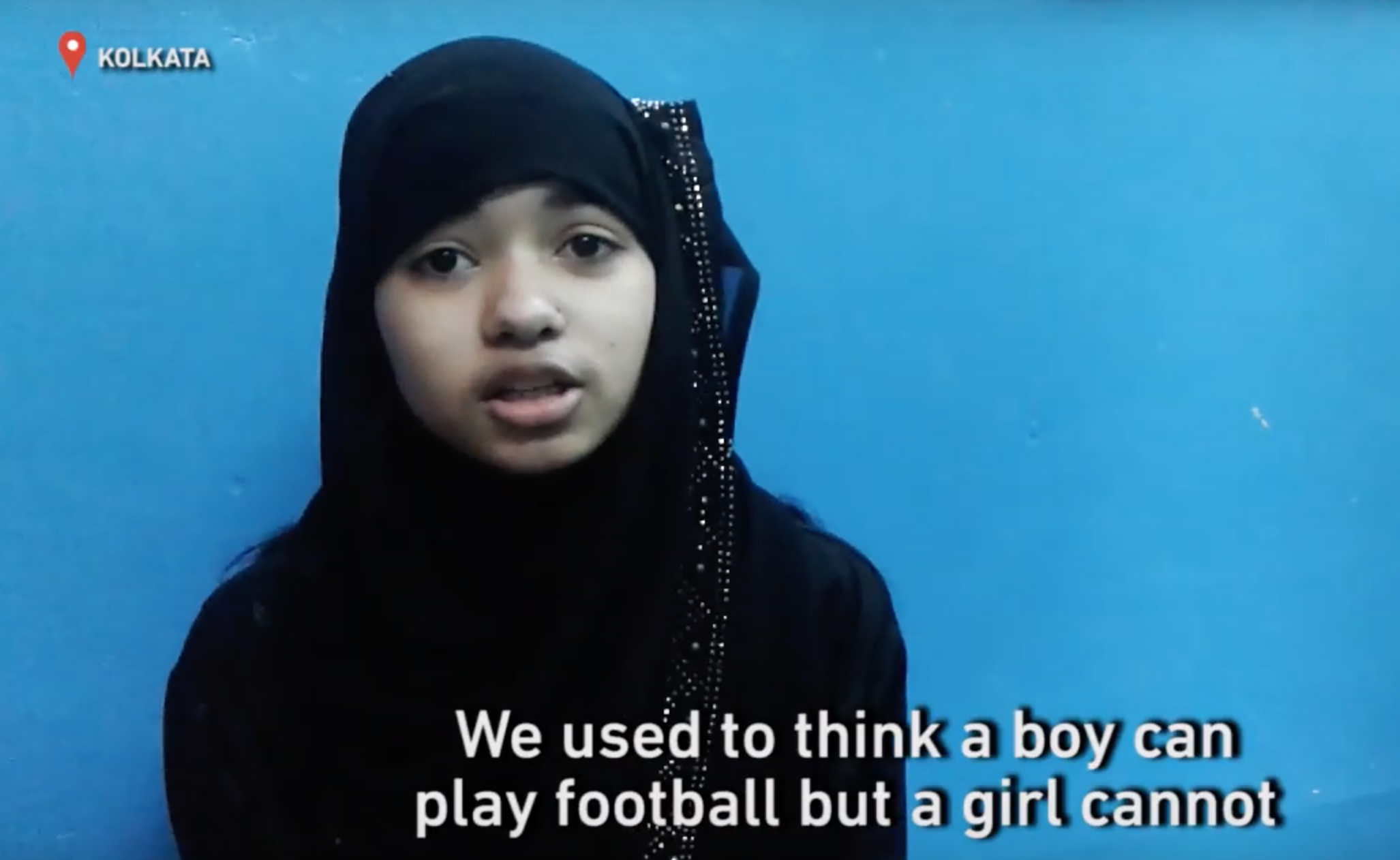 Screenshot from “Playing Against Patriarchy: Muslim Girls own the ‘Male Space’ by Playing Football” video.

This post was written by Grace Jolliffe and originally appeared on Video Volunteers, an award-winning international community media organisation based in India. A slightly edited version is published below as part of a content-sharing agreement.

A group of young Muslim girls harbour dreams of becoming footballers one day. They have turned out to practice in a government playground in the Rajabazar slum area in Kolkata, the capital of the Indian state of West Bengal. They dream of dribbling and playing on bigger grounds, before bigger crowds. VideoVolunteers community correspondent Debgopal Mondal interviewed some of the young girls, creating a video report which shows how the girls are challenging gender norms through sport.

Shahina Javed is the woman who set up this all-girl football team. As the founder of the NGO, Roshni, which fights domestic abuse, dowry, and child marriage, Shahina has been breaking societal norms for the past ten years. Besides empowering adolescent girls, Roshni also conducts awareness workshops on a women's rights to education.

Read: Years After Marriage, Indian Women Dare to Say Their Husbands’ Names for the First Time

Although Indian women have long been discriminated against in the world of sports, these Muslim girls are pushing against the idea that it is only a ‘male space’. According to one of the young girls, Mehvi Shira, participating in the all-girls team has taught her that girls are just as good as boys:

In India, it is not easy for girls to get ahead in sports. Gender discrimination can be seen in the gender pay gaps, biased attitude towards female athletes, and not to mention the frequent sexual remarks and harassment incidents. This disparity highlights problems which are deeply rooted in the sports system and society in general. The lack of facilities, opportunity, and support by the government is also an added factor as to why young girls are giving up on their dreams. Tani Fatima says:

The ground does not belong to [the boys]. It's for all of us. We have the right to go there and play. They stop us from playing. We do not have a proper space to play which is affecting our game.

Read: How Are Boys and Girls Supposed to Sit, Walk, and Dance? An Experiment in India's Gujarat.

While many in India think that gender equality in sport is a utopian idea, there has been a growing movement of people who are coming forward to talk about and fix some of the issues faced by women. VideoVolunteer's network of video activists (both men and women alike) are committed towards equality and work around breaking patriarchal norms under the Khel Badal Campaign of VideoVolunteers. This is an example of how VideoVolunteers wants to portray stories about how women, face, negotiate and challenge patriarchy.