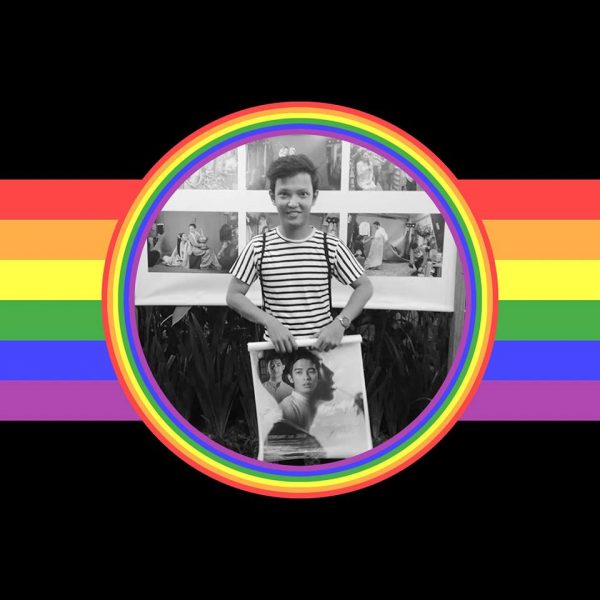 Photo of Kyaw Zin Win by Aung Myo Min, an LGBTQ+ rights leader and director of Equality Myanmar. The photo was taken from a Facebook post announcing a prayer event for Kyaw Zin Win in front of Myanmar Imperial University.

On 23 June 2019, 26-year-old Kyaw Zin Win left a tragic suicide note on his Facebook page before he took his own life. He wrote: “[Myanmar] is a country that mocks the identity and existence of a person”.

He was working as a librarian at Myanmar Imperial University where he was reportedly bullied by colleagues for being gay. His last Facebook post detailed the painful homophobic remarks he received from his seniors.

His story quickly spread across Facebook, Myanmar's largest social media site, where his note was shared 13,000 times and generated overwhelming public sympathy. Many users updated their profile pictures with Pride filters. In just one day, news about his tragic death was picked up by local, regional and international media.

While many people simply expressed their condolences and support to his grandmother, of whom he was the caretaker, others demanded concrete actions from the university. A single post from the university's Facebook page generated 4,400 comments, with the majority supporting Kyaw Zin Win and questioning the school's workplace culture and the enforcement of its anti-discrimination policies.

Outside of social media, a massive public response was organized by many local LGBTQ+ organizations to demand justice from his work organization. On 26 June, his funeral ceremony was attended by hundreds of relatives, friends, LGBTQ+ activists, and sympathetic supporters. Letyar Tun, one of those who joined the crowd of mourners, said that the death of Kyaw Zin Win resonated with many who are reeling from anti-LGBTQ+ discrimination. He added that some people in the funeral party have called Kyaw Zin Win a martyr who sacrificed his life to show the suffering of the LGBTQ+ community.

Hla Myat Tun, deputy director of the LGBTQ+ rights group Color Rainbow, explained to Irrawaddy News how Kyaw Zin Win's experience represents only a small part of the deep-rooted gender and sexual identity discrimination that are embedded in many institutions in Myanmar. He bemoaned that the country's existing law reinforces discrimination:

We need interest from our members of parliament as right now their political interest in the protection of LGBT people is zero.

The government must take responsibility and ensure that schools and workplaces guarantee a safe place for people. If not, such tragic events will not stop. […] People have started becoming aware that discrimination is unacceptable, but we need a set of policies, guidelines and codes of conduct stated in writing.

Nathan, a guest writer from Rainfall Gender Study Organization, wrote more about how the deep-rooted “heteronormativity in the country” was to blame for pushing people to the limit and asked if such events would trigger broader social movements to call out against oppression:

[…] In this country with so many types of oppression, it has been long overdue for a social revolution that challenges current social norms. [I wonder] if there will be social movements based on the cases these two young men [referring to an earlier LGBTQ+ suicide case]. And here I believe that if [we all] come together for movements beyond LGBT movement and identity politics but for all those who are being marginalized (women, gays, ethnic minorities, and lower class people), we would be stronger and succeed …

Kyaw Zin Win's death was a chilling wake-up call about the abuses endured by the LGBTQ+ community in Myanmar. But the unexpected public support and solidarity in the aftermath of his death also heralded a rare opportunity to unite and talk about strengthening the campaign for human rights protection for LGBTQ+ individuals.