What will it take to combat digital authoritarianism in Southeast Asia? 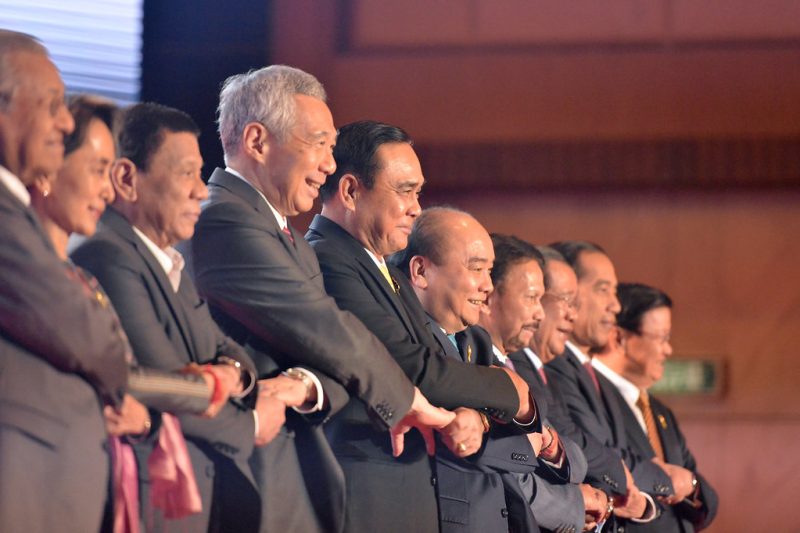 This post is based on a keynote presentation delivered by the author at the first Global Voices Asia-Pacific Citizen Media Summit June 2, 2019 in Taipei, Taiwan.

The rise to power of someone like Philippine President Rodrigo Duterte, who gained global notoriety for launching a bloody campaign against illegal drugs, is linked to the manipulation of online information tools by populists who end up dominating elections.

Indeed, Duterte admitted to hiring a cyber army in 2016 and ran a campaign which prominently featured the use of social media to promote his candidacy. Later, his government was accused of deploying online trolls to distort public debates by spreading disinformation. He has also been also criticized for bullying the media while dangling before the public proposals to police the internet.

It is therefore no surprise to hear many people associating Duterte’s ascendancy with the alarming trend of ‘digital authoritarianism’.

But the internet cannot simply be blamed for enabling the victory of politicians like Duterte, who is in fact a newcomer in a region dominated by authoritarian regimes which came to power years before social media use became ubiquitous. For example, Cambodia’s Hun Sen was first elected prime minister in the 1980s. Thailand's military has staged 12 coups in the past century. Singapore’s ruling party has been in power since the 1960s, and Malaysia’s ruling coalition held power from the 1950s until its defeat in 2018. Brunei has an absolute monarchy, while Vietnam and Laos are communist states.

Applied to the Philippines and the rest of Southeast Asia, digital authoritarianism refers to how the internet has been weaponized in aid of existing authoritarian regimes. It signifies the use of the online tools that many hoped would empower citizens for mass surveillance and the promotion of divisive hate speech. It reflects the actions of paranoid, repressive states seeking to prevent the rise of opposition forces by destroying connections and solidarities between communities, and online spaces of resistance.

Taming the ‘disruptive’ internet has been the focus of many states in the region. Internet legislation is often framed in aid of boosting national security objectives, protecting the public interest, and preserving law and order. In shaping public opinion, crusading governments have rationalized their actions by invoking the need to protect the public from online evils. They often invoke the need for social harmony, public tranquility, and defending the country’s morals and history. Indonesia, for example, seeks to censor pornography and other ‘obscene acts’, while Malaysia cites racial harmony when removing offensive internet content.

The first set of anti-cybercrime laws sought to update draconian media regulations and make them applicable in the era of social media and smartphones. Across the region, governments passed laws and orders on cyber libel and cyber defamation. What Vietnam’s decree no. 72, Myanmar’s article 66(d), Cambodia's social media prakas (regulation), and Thailand’s Computer Crimes Act combined with the harsh lèse-majesté law have in common, is the intent to criminalize any online activity deemed a public threat or subversive in the eyes of authorities.

The current priority is the building of consensus to justify the passage of laws against so-called ‘fake news’. Last May, Singapore passed a law which defined false news this way: “A statement may be found to be false if it is false or misleading, whether wholly or in part, and whether on its own or in the context in which it appears.” Media groups were right to call the measure Orwellian. Laws like this are too broad and too vague—yet brutally precise in targeting free speech. 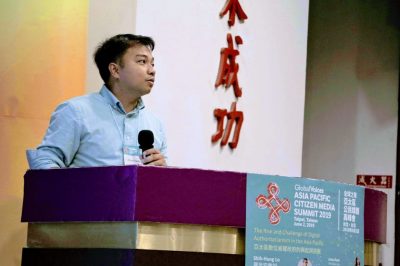 The author delivering his presentation at the Global Voices Asia-Pacific Summit in Taipei.

The systematic approach to clamping down on free speech is often characterized in news reports as the adoption of the so-called ‘China model’. It points to the use of sophisticated technologies by security forces to control the local population—in particular, the weaponization of bureaucracy to silence dissent.

This is only partly correct, because China is not to blame for what’s happening in several Southeast Asian countries. Applied to the region, the ‘China model’ is even more sinister because of the way it is fused with built-in or local models of oppression to create a deadly mix of tools and processes that buttress the authoritarian features of governments.

What are these local instruments of oppression? Antiquated media laws, new cybercrime measures, security offices designed to gag the population, agencies toeing the line of the ruling party, and social institutions coerced to self-censor and kill critical thinking.

To speak of ‘digital authoritarianism with Chinese characteristics’ without explaining the region’s machineries of censorship would likely exaggerate China’s role in the overall equation of oppression—and make it more difficult to recognize the impunity perpetrated by evil regimes.

For it is not that governments in Southeast Asia suddenly became authoritarian because they were inspired by what China is doing. They already have repressive laws on defamation, sedition, and whistleblowing. What they got from China, primarily, was that nation's precious political support, and the license to import surveillance hardware and totalitarian techniques to reinforce indigenous methods of controlling the local population. This has resulted in a frightening pattern of mixing digital and archaic tools of oppression to preserve the rule of despots and destroy hope of an alternative future, whose  political impact is not limited to suppressing free speech, since it has the potential to hack elections, undermine political processes, and destroy accountability.

From Asia to Silicon Valley

Is there a way out of this situation we are in? How can we break the rule of autocrats? How can we reclaim the promise and potential of the internet to strengthen our democratic vision? How can we assert our demands when voting results are digitally manipulated, public discourse is polluted by disinformation, and institutions are held hostage to archaic rulings?

I will dare to say we must go back to the basics of political organizing. At the grassroots level, we must fight not only fake news but cynicism, while planting the seeds of hope for a new political future. If we want new laws, the starting point is not lobbying, but political education in our communities. We want social movements backed by real political strength that can engage both corporate and bureaucratic powers. Our hope lies in a strong civil society that can make an impact from Asia to Silicon Valley.

Through political organizing, we can form new partnerships with various sectors who can contribute to the campaign. Students, writers, workers, farmers, software developers—each of these groupts have a role to play in this fight against what we call digital authoritarianism.

We must address the roots of conflict in society, attacking the deeper problems engendered by economic policies that are biased against the poor, and building power in the local sphere to challenge the nefarious impact of elite rule. In other words, we must work directly to combat the forces and change the social conditions that allowed authoritarians to claim power in the first place. Technology will be our friend in this long fight, but it is the people—and mainly the people—who will lead the struggle.

So it is neither a social media revolution nor a digital revolution that will save us from the clutches of digital authoritarianism, but no less than a people power revolution.