Censorship of references to the massacre by platforms is pervasive. 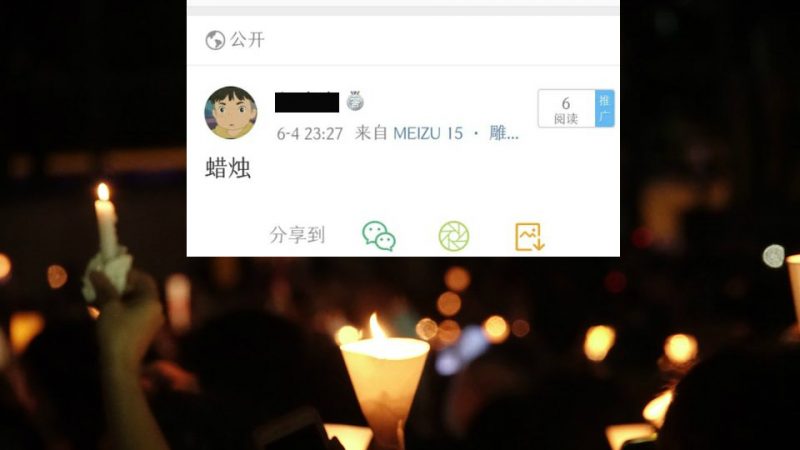 In Hong Kong, tens of thousands commemorated the June 4 massacre with candle lights. In mainland China, when the word ‘candle’ in Chinese was published on Weibo at midnight on June 4 2019, it was removed by the platform two hours later. Remix image with screen capture from Weiboscope.

To mark the 30th anniversary of the Tiananmen Square Massacre, research teams at the University of Hong Kong's Weiboscope and the University of Toronto's Citizen Lab gathered a collection of June 4 related content that is censored on social media in China. We explain our analysis of the censored contents in a series of articles published on Global Voices. The first post was published on April 17, 2019.

June 4th is one of the most politically sensitive dates in mainland China when the censorship machine is in full gear to stop remembrance of the Tiananmen Square Massacre from surfacing online.

After the bloody crackdown on the Tiananmen student democracy protests in 1989, the Chinese government has systematically attempted to expunge this dark mark of history from the public record in China. History textbooks include no references to the event, media is tightly controlled, and pervasive censorship of social media continues. However, the annual candlelight vigil at Hong Kong Victoria Park, playful images of the Tank Man, or simply a candle image posted on Weibo show a continued effort to recognize and remember the forbidden history. The censored content we compiled show the struggle between those vowing never to forget and authorities attempting to erase this piece of history from collective memory.

The struggle between remembrance and censorship

This year, in the lead up to June 4, censorship of international websites, media, and domestic platforms increased. Since mid-May, China blocked Wikipedia in all available languages, not just the Chinese version. At the same time, at least five video platforms were forced to undergo “system maintenance” and disable a number of functions, including new user registration and posting “bullet chat” comments on videos.

In early June, 12 major international news outlets from five different countries were blocked, including CNN, the Washington Post, the Guardian, the Intercept, the Toronto Star, The Age in Australia, and New Zealand’s Newsroom. Previously, the New York Times, Reuters, and the Wall Street Journal have long been inaccessible within China.

Removal of references to the massacre by social media platforms is also pervasive.

In addition to content filtering and the suspension of a large number of dissident user accounts, this year WeChat banned all users from altering information on their profiles, while Weibo suspended its image attachment function.

Under the Cybersecurity Law, all content platforms have to take preventive measures such as updating their content and user management systems and their sensitive word lists to prevent being penalized by the censorship authorities for the spread of illegal content— pornography, rumor, defamation, threat to national security and socialist values. On the other side of the memory battle, some netizens attempt to outwit censors by posting coded posts, images, cartoons, music, and memes.

Since 2009, the Citizen Lab has identified more than 3,500 blocked key terms about June 4. The list of censored terms were gathered from seven social media and chat platforms, including WeChat, Line, TOM-Skype, Sina UC, YY, Sina Show, and 9158. The keywords can be put into three major categories:

In an attempt to circumvent keyword censorship, mainland Chinese netizens developed many coded expressions about June 4. For example, there are hundreds of coded expressions for the term “June 4”, such as “May 35”, “sIxf0ur”, “32X2”, “444444 incident”, “VIIV”, “8×8” and others. Chinese names such as Wuer Kaixi, one of the protest movement's student leaders, has a dozen variations such as “舞而開西“ using Chinese homonyms. The image of Tank man was previously coded as “the man with a white shirt taking a walk” (白襯衫散步). However, as these coded terms become popular they were also added to the blacklist.

In the days leading up to the 30th anniversary of June 4, YY, a popular live streaming platform in mainland China, updated its keyword blacklist. Updates to the list included 306 June 4 related keywords of which one third are related to Hong Kong.

Hong Kong is a central site for annual commemorations of June 4. Although the city has been part of the People’s Republic of China (PRC) since the British left the territory in 1997, it enjoys a certain amount of autonomy from China as a special administrative region under the “one country, two systems” principle.

Each year, tens of thousands of people in Hong Kong gather in Victoria Park to light candles and mark the anniversary. References to these memorials often appear on censored keyword lists (for example, Victoria Park candle light vigil 维园烛光晚会). The updates made to the YY list this year show a spike in Hong Kong related keywords and focus on events planned for the massacre's 30th anniversary.

The keywords include references to the annual vigil (烛光晚会, Candlelight vigil), and other memorial events such as “Kites for Democracy” (風箏行動) and the “Patriotic Democratic Parade” (爱国民主大游行).

Keywords also include the names of people, groups, and locations associated with June 4 commemoration activities:

The increased censorship of June 4 related activism in Hong Kong activism may be due to YY proactively blocking content it envisioned would become viral around the anniversary. It may also reflect a general increase of Chinese government pressure on freedom of speech in Hong Kong.

Regardless of the reasons behind the spike in Hong Kong related censorship, the city remains a key space for preserving June 4 memories in face of China's censorship machine.