Calling for peace is still considered a crime in Turkey 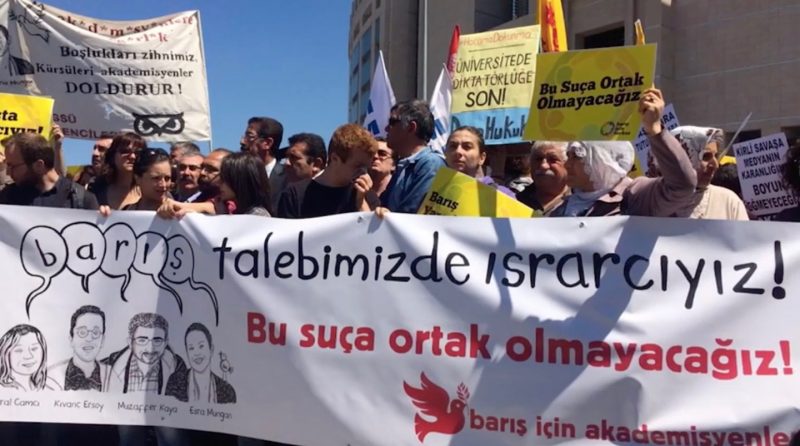 Academics for Peace rally. Screenshot taken from a YouTube video posted on the Bostonbul YouTube channel on March 2017.

Three-and-a-half years have passed since the Academics for Peace (AfP in short: Baris icin Akademisyenler in Turkish) boldly told Turkey’s government “we will not be a party to this crime.”

Their declaration amounted to an outright rejection of state military violence in southeastern Turkey, which is home to a large Kurdish population. At the time, civilians were bearing the brunt of violent clashes between Turkish forces and the Kurdistan Workers’ Party (PKK), that is banned as a terrorist organisation in Turkey. The petition set more than 2,000 signatories on course for a collision with President Recep Tayyip Erdogan, who had initiated the state military offensive in the region.

Global Voices sat down with Asli Telli Aydemir, one of the signatories, who is currently living outside the country, to discuss the roots of the AfP movement and its future both within and beyond Turkey’s borders.

GV: How did Academics for Peace begin?

ATA: At the end of 2015, the predominantly Kurdish regions of Turkey entered an intensifying spiral of violence. Curfews were enforced in different cities and districts lasting for months. Entire neighborhoods were demolished, leaving people homeless. Many lost their lives. In the face of these developments, more than 2000 academics decided not to remain silent and issued a statement entitled “We will not be a party to this crime!”. The petition called on the government and the security forces to abide by domestic and international law and to return to the peace process that had been interrupted after the national elections of June 7, 2015.

GV: What were the consequences for signatories?

ATA: After the petition was made public on January 11, 2016, the Academics for Peace were specifically targeted by the President and subsequently turned into objects of hatred and defamation in the media. Since then, we have been attacked, threatened and turned into subjects of administrative and criminal investigations. Hundreds of signatories have been dismissed from their positions by order of the Council of Education and university administrations. At least 400 passports were also invalidated, preventing these academics from travelling abroad. In December 2017, judicial proceedings were initiated against the signatories, on the charge of “propaganda for a terrorist organization.” Until mid-June this year, 742 petition signatories have been charged, including myself, with sentences already handed down to about 190. Many verdicts came with prison terms of 15 months. Some of the academics receiving these sentences conceded to waive their right to file an appeal, an option open only to those who were sentenced to prison terms of less than two years. Waiving the right of appeal turns the prison term into a suspended sentence, effective for five years, during which similar “crimes” will result in immediate imprisonment and additional charges. This suspended sentence has served as a powerful silencing mechanism. The close of last year (December 2018) saw sudden increases in the prison terms, above the two-year limit.

GV: AfP began in Turkey but is now a global network. Can you tell us about that?

ATA: AfP found solidarity from academics across the world, with the hypotheses blog, curated by Academics for Peace Germany e.V.  playing a vital role. It serves as an archive of how law is operationalized for the suppression of academic freedom in Turkey and elsewhere. AfP network initiatives in Germany, UK and the US help empower collaborative advocacy regarding acts of persecution by the State against academics. We, as academics in exile, try our best to address rights violations in Turkey and form solidarity collectives, in alliance with democratic organizations and labor unions in Europe and the US.

GV: Can critical academics hope for a fair trial in Turkey?

ATA: Unfortunately not. There have been many cases of arbitrary interpretations of prosecutors and judges. The AfP network in Turkey has managed to create a solidarity and monitoring hub for the trials in dozens of penal courts, throughout the country. The calendar of hearings shows the schedule and number of scheduled hearings on a daily basis beginning from February 2018 and running through September 2019. A quick glance at these court records shows that a 15-month sentence with deferral is the most common verdict. At present, there are 35 cases where convictions have not been deferred (those convicted face jail immediately). None of the verdicts have been overturned on appeal.

GV: Can you tell us about some of your colleagues who are already serving time?

ATA: On May 8, 2019 one of our dear colleagues, Prof. Füsun Üstel began serving time in the Eskisehir H-type women’s prison. She is expected to serve an 11-month (reduced from 15 months due to related legal clauses) sentence unless no other amendments or interim decisions are made. Her deferral application was rejected. Our protests and calls for action have received some attention from the international media and higher education institutions, but the actual bodies responsible remain silent. Furthermore, our dear colleague, Assoc. Prof. Tuna Altinel was detained and shortly after imprisoned in Balikesir on May 11, 2019 simply because he contacted police and enquired about his travel ban. Dr. Altinel cannot go to France and continue his university work in Lyon due to the charge of “propagandizing for a terrorist organization” during an academic a panel discussion in Lyon. During the panel in question, Altinel translated the speech of a former lawmaker for the Peoples’ Democratic Party (HDP), Faysal Yildiz, from Turkish into French.

GV: What is the future for AfP?

ATA: As of today, around a dozen local academic initiatives linked to AfP have grown up in Turkey: Sans Campus, Kültürhane, Ucurtma Café, Ada-Coop, Birarada Association, Kocaeli Academy for Solidarity, Street Academy, students`solidarity initiative Köstebek Akademi, Association for Migration Research are just some of the most inspiring examples. Critical pedagogies, in some instances anti-pedagogies, are taking root, based on knowledge-sharing without hierarchical structures. Off-University e.V. was established to support academics who have been purged from their institutions, forced to resign, who were legally and politically persecuted and even imprisoned because of their opinion and research. This initiative deserves attention. Another solidarity project is Mapping Funds, a collaborative digital mapping effort to analyze diversified support networks and funds attributed to at-risk scholars in/from Turkey. These efforts ensure that critical knowledge is preserved and disseminated.