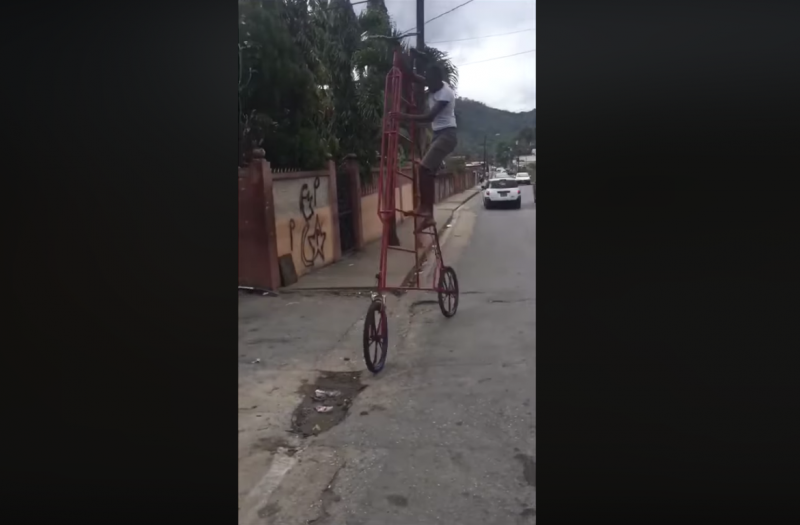 Screenshot of the video of Trinidad's “Bike Man”, which has been widely shared on Facebook.

Trinidad and Tobago is a land of heights —  literally and figuratively.

Its moko jumbies [2], those mystical stilt-walking characters rooted in West African tradition, are a fixture of the country's annual Carnival celebrations. Oral tradition [3] has it that the height of the stilts — often between 10 and 15 feet high — gives the jumbies the ideal vantage point from which to discern evil and protect the innocent. The stilt-walkers usually dress in long, full skirts or flowing pants to create an illusion of themselves as giants — but Trinidad and Tobago's latest tall tale is not the least bit interested in disguising the mechanics of what makes him able to loom over lesser mortals.

Meet Trinidad and Tobago's “Bike Man”, who has become a bit of a sensation on social media. His name is Jazeel Joseph, a 34-year-old welder who has 21 years’ experience walking on stilts as a moko jumbie. Talking to me by phone, he says he has gone higher than any other stilt-walker in the country, to heights of between 14 and 16 feet. 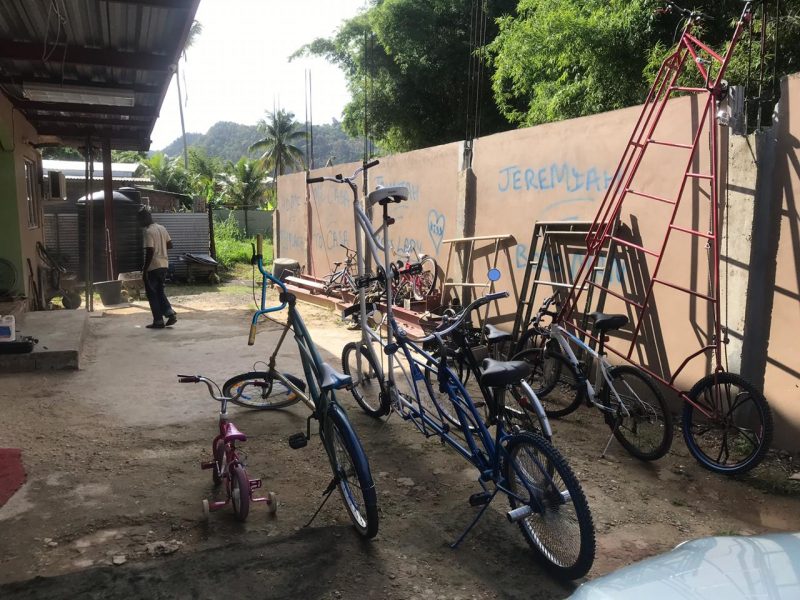 Some of the bicycles that Jahzeel “Bike Man” Joseph has in his collection. Photo courtesy Joseph, used with permission.

The idea of building these tall bikes occurred to him after he saw a couple riding a tandem bicycle around his neighbourhood. He said to himself, “But Jahzeel, you could build this!” He worked out a design and “just ‘uppsed it’ [made it go up] a little”. He has a fleet of bikes — three of which the designed and constructed himself — that range from seven feet to 12 feet, 9 inches tall. Consider him a moko jumbie on wheels! [Note: there is a language warning for the video.]

The “greatest bike man in the world” hails from Diego Martin, a suburb in the north west of Trinidad. When I asked him what inspired him to create these unconventional bikes, he said, “I like to be different.” But there's more to it than that. He sees riding — and specifically riding these unusual bikes — as a way to encourage youth to discover what makes them different.

“Crime is not the only way of life,” he explains. “You don't have to be a criminal for you to be recognised.” When the “youth men” from his area come to his place, they learn to ride these amazing bikes and in the process, imagine limitless possibilities for their own lives. Joseph goes for rides all over the country, attracting lots of attention in the communities he passes through:

There's a Trinbagonian saying: to be “on heights”. It's a layered and rather complex concept which basically refers to someone taking something to a new level — often in a fun and impressive way — but those heights also have an innate depth to them that take people out of their comfort zone and make them think about things in a way they hadn't considered before. There's an element of admiration and wonderment that gives people pause and often causes them to just shake their head in amazement. Joseph calls the bikes “jaw-droppers” — and they certainly are.

To quote the onlooker in the second video:

To expand his reach, though, Joseph needs support in the form of sponsorship for his youth outreach initiative, as well as donations of used bikes and parts. In one Facebook thread [1], there was a big discussion about whether the “Bike Man” could qualify for the Guinness World Records [4], but it seems he's about 10 feet too short [5]. Joseph is on top of the situation though — he's already got in touch with the Guinness World Records people, who have sent him the relevant guidelines. He plans to enter a new design he's working on and break the existing record for the world's tallest rideable bicycle.

There's no doubt that Joseph's “heights” quotient is right up there — in fact, the #1000 Mokos [6] stilt-walking group has expressed an interest in meeting the “Bike Man”. “That's no problem, man!” he tells me. “I could ride down there easy and take a picture with the moko jumbies.” Now, that would be “real heights”!