The project is about showing what's possible within human endurance. 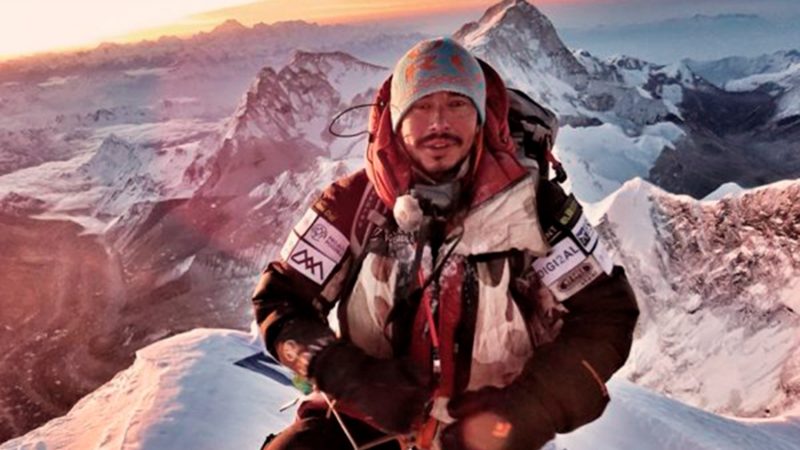 Nirmal Purja, better known as Nims, is on a mission to climb all 14 peaks above 8,000 meters in 7 months. Image from the Project Possible Facebook page. Used with permission.

Nirmal Purja MBE, better known as Nims, is on a mission to climb all the ‘eight-thousanders’ (the 14 mountains above 8,000 meters) in a record-breaking seven months.

As the son of a retired Indian Gurkha, Nims also went on to join the Brigade of Gurkhas and he served with the elite British Special Forces. He plunged into mountaineering after leaving the military and recently climbed six of the world’s highest peaks in less than four weeks.

Even as more and more climbers are paying high fees and queuing to summit Everest — as evidenced by the viral photo that Nims took on the world's highest peak – the climber himself is still short of funds to begin the second phase of his Project Possible mission.

Sanjib Chaudhary from Global Voices caught up with Nims and talked about what drove him to take the speed climbing challenge:

Global Voices (GV): What inspired you to take the Project Possible challenge? Tell us about your project.

Nirmal Purja (NP): There are only 14 mountains on earth higher than 8,000m (Eight-thousander) and they are all located in the Himalayas. The current world record for one individual climbing all 14 peaks is nearly 8 years. I aim to climb all 14 peaks in just 7 months. For me, this project is about pushing myself to see what is possible within human endurance. How far can humans go, can we go beyond what others think is possible?

GV: You’ve accomplished six summits in four weeks recently. Out of the six peaks, which was the most difficult to climb and why?

NP: Without doubt that would be Dhaulagiri due to the weather. We were climbing in winds in excess of 70-75 mph. We could only climb when the wind speed decreased for a bit and when it went up again we would embrace because we couldn’t move and if we did, we would have blown away.

GV: Many say that above Camp 4 in Everest, and the other eight-thousanders, nobody cares about fellow summiteers. The air is thin, the wind blows hard, and the temperature is extreme. What would you do if you found someone in need of assistance while you were on the way to summit a peak?

NP: What would I do or what did I do? In 2016, during the descent from summiting Everest, I rescued a female climber who had been left for dead just below the Balcony at 8,380 m. I brought her down on my own and handed her care over to the Everest Air Rescue Team at the South Col. I would do the same every time.

GV: You had climbed the mountains in the past as well. Did you find any difference while climbing the peaks this time? Did you notice any visible effects of climate change in the mountains?

NP: I have climbed some of those phase mountains before and I did see changes. A lot less snow, glacier melting. It is a pretty stark and obvious change. We had to carry water where we previously melted snow.

GV: What are your next plans? When and which peaks do you plan to scale? What’s the funding situation? What keeps you motivated?

NP: Phase two is delayed for around two more weeks while I get funding and I am currently £150k short. I am motivated as much now as I have ever been, my mind is still positive. I get so much inspiration and motivation from my followers on Instagram and Twitter that drives me.

GV: After accomplishing the project what’s on the radar for you? What are your future plans?

NP: For now, I am 100% focused on Project Possible. After — who knows? All I know is I want to continue raising money for the charities I am working with.

GV: Lastly, climbing eight-thousanders is not an easy task for a regular guy. What does it take to climb the mountains? Is it special genes, training, or will power? What’s your advice to an aspiring climber?

NP: You need to have both physical and mental endurance to climb any mountain, especially eight-thousanders. I believe I have a good physiology developed from being born and raised at high altitudes. I also have the mental approach from my years in the Special Forces. This combination gives me a unique skill set. Take your time, climb 5000, 6000, 7000 meter peaks, learn how your body reacts to altitude. Take it slow, build your experience and enjoy the journey. Don’t rush for an 8000 meter peak.