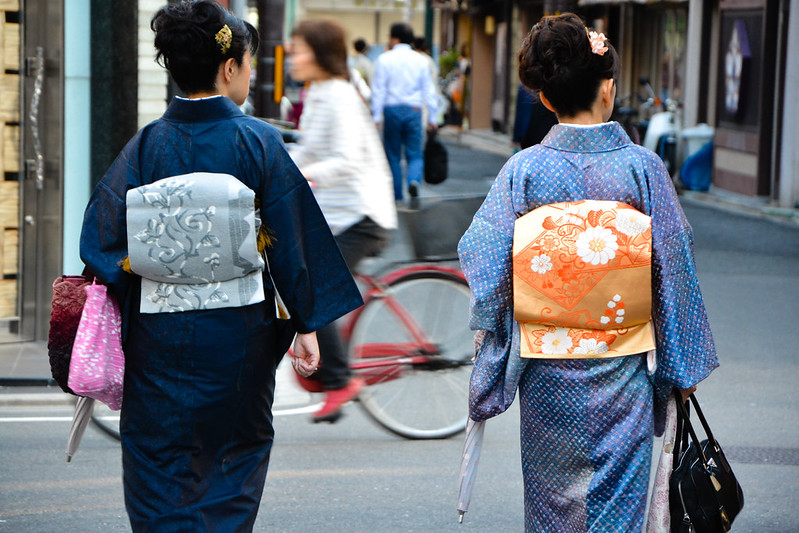 While the direct translation of “kimono” (着物) could literally mean “something one wears”, the word actually refers to a traditional garment still worn in Japan, usually for formal or special occasions.

Today’s #hitoe #kimono is a high-quality silk weave of my favorite pattern – the momiji leaf. Since hitoe can only be used in spring and fall, the delicate green color of this leaf usually associated with autumn makes it appropriate for either season. #kimonooftheday #spring pic.twitter.com/pIPyJftxKM

While Kardashian plans to launch an entire suite of products under the “Kimono” trademark, including luggage, perfume and deodorant, the American celebrity and reality TV star announced her new brand by unveiling a new line of undergarments for women.

Many commentators pointed out that Kardashian's line of lingerie looks nothing like its namesake garment from Japan:

The story was quickly reported as a controversy by many prominent English-language news outlets including CNN, the Guardian and the Los Angeles Times. The BBC translated its own reporting on the story into Japanese.

Not everyone was convinced the story was controversial in Japan. Stephen Stapczynski, a longtime Asia correspondent for Bloomberg noted:

Anyone else feel like these types of headlines on the Kimono scandal borderline hyperbole?

Not a single Japanese newspaper has picked up this story. Only blogs/foreign media have reported on it in Japanese. pic.twitter.com/J4YEqcURm3

As of Thursday, June 27, the story had not been reported in the digital editions of any of Japan's largest newspapers, including the Yomiuri, the Asahi or the Mainichi. Rather than reporting on the launch of “Kimono”, the Sankei newspaper republished a press release promoting the August edition of Vogue Japan magazine devoted to the rise of influencers in marketing, Kim Kardashian among them.

So far, Buzzfeed is the only major Japan-based news outlet that is reporting on how Japanese people are reacting to Kardashian's new brand.

Buzzfeed reporter Sumireko Tomita did need to explain cultural appropriation to her audience in Japan, where there generally is little awareness of the concept:

“Cultural appropriation” is when one plagiarizes or makes use of the culture or traditions of a country or region different from one's own origin or affiliation.

In the United States and other countries, celebrities are often criticized for appearing on stage in the costumes that imitate the national dress of other countries and cultures. The criticism is not just reserved for celebrities, as it is regarded as a problem when traditional designs and clothing is used as Halloween costumes as well.

In her Buzzfeed article, Tomita also reported that Kardashian's initiative had indeed sparked immediate and significant online discussion online in Japan, with the conversation coalescing around the Twitter hashtag, #KimOhNo.

People inside and outside of Japan used the hashtag to criticize Kardashian's planned business venture, and also shared photos of what a kimono should look like using the phrase “this is a kimono.”

Some of the strongest reactions came from the Japanese-American community, such as this comment by the Densho Project, which documents the experiences of Japanese-American internees in the United States during the Second World War:

It's degrading and gross to turn a deeply significant, centuries-old cultural garment into overpriced underwear. It also erases and then turns a profit off the history of forced assimilation of Japanese and Japanese Americans in the U.S. #KimOhNo pic.twitter.com/BhgVY6BRfA

While outrage both inside and outside Japan has focused so far on Kardashian's appropriation of the term “kimono” to sell undergarments, other observers noted she is attempting to trademark the word itself.

Popular Twitter account Tokyo Fashion subsequently reported that, “Kim Kardashian filed for a bunch of trademarks on the word “kimono” (even for actual kimono), which, if granted, would allow her to ban Japanese companies from using the word “kimono” in America […]”

In a series of tweets, Tokyo Fashion noted that Kardashian is not the first U.S. celebrity entrepreneur to attempt to trademark a Japanese word to gain exclusive commercial rights in the United States:

This is the appropriate way to file for a trademark with the word “Kimono” BTW:
“No claim is made to the exclusive right to use “KIMONO” apart from the mark as shown.”
That is what Gwen refused to do with “Harajuku” even though it was requested by the trademark examiner.

Writing for Yahoo! Japan News, Japan's most popular online news aggregator and publisher, Kurihara Kiyoshi, a specialist in Japanese intellectual property law and patents, notes that Kardashian may likely be ultimately successful in trademarking certain aspects of the Kimono brand:

For example, it would be possible to trademark Kimono for computer software or stationary supplies (in fact this already occurs in the United States). While APPLE can not be trademarked as a brand of fruit, it's well-known that APPLE is a trademark of a line of computer products.

In his article Kurihara suggests that while that it's difficult to predict if Kardashian will be successful in her efforts to trademark “Kimono” for her line of undergarments, she may ultimately be able trademark the term for her planned line of luggage, accessories, and deodorant.