"The point of the exercise was to see people engage" 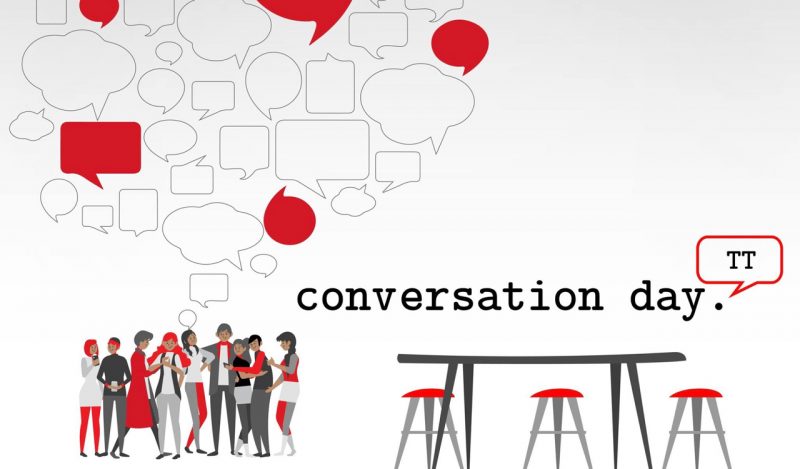 It's funny how conversations start — and even more interesting where they can lead. Franka Philip and Ardene Sirjoo, founders of the digital startup Trini Good Media, regularly have conversations via their podcast “Talk ‘Bout Us,” but the pair decided to stretch their conversation skills even further when they heard their UK-based friends — who are involved in The Talking Revolution , an initiative dedicated to training and advocacy for conflict management — tweet about World Conversation Day.

The event started in 2013 in the United States and has spread to other countries around the globe. Trini Good Media, in conjunction with Bocas Lit Fest, led the first event in Trinidad and Tobago on June 8, 2019. “Given the way the world is going,” Philip says, “it's very important for people to try to understand each other and their differences by having conversations.”

Philip spends a lot of time online, and she became dismayed by the tone of conversations happening in the Trinbagonian blogosphere. She believes that so many issues could be resolved if people simply spoke to and understood each other. “Not just talking,” she added, “but listening. A lot of people listen to respond without actually listening.” 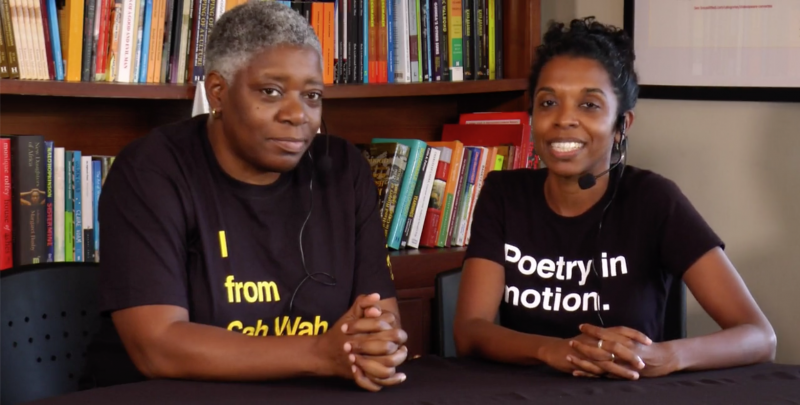 Screenshot of Franka Philip and Ardene Sirjoo as they co-hosted the Conversation Day TT livestream on June 8, 2019.

Sirjoo suggested they could curate questions, get an interesting group of people together and live stream the discussions. Conversation Day TT was the amazing result.

I sat down with Philip (and one of the event participants, filmmaker Nicola Cross) at a popular coffee shop to talk about how their foray into offline conversations went and why it is important for us not to lose the art of having face to face conversations.

Janine Mendes-Franco (JMF): How did you decide on which people you would throw together in the different groups? 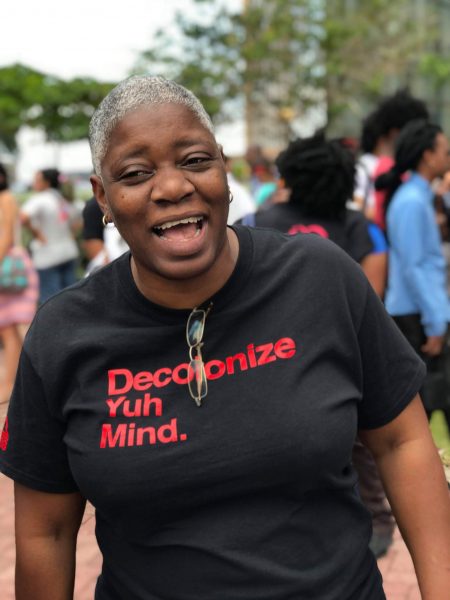 Franka Philip (FP): We just matched people to conversations — not necessarily based on their being experts, but intelligent people who we know think about things. We tried to put people together who did not know each other so you'd get a genuine, interesting conversation.

JMF: What were some of the topics they discussed?

FP: We did six topics. The first topic was a conversation between myself and Kevin Browne, who won the 2019 Bocas Prize for Caribbean Literature, in which we talked about the creative life. We ended up talking about creativity in so many different ways … including how technology is affecting the way that we are being creative.

The second conversation raised the question of who different people considered to be national heroes and how they would honour them. The third topic was about music: You're stuck on a desert island and can only have three songs. Which would you pick and why? The fourth topic asked people how their mortality motivates them.

The fifth was, “What would you give up to make Trinidad and Tobago better?” It was really provocative in that we got two young people —Jafar Howe, the young man from Laventille [an economically disadvantaged area] who's going off to Princeton University and Jesse Deane-Smith, who will be going to the University of Sussex  — and their view of what Trinidad needs to change is really interesting. They talked about attitudes to productivity, about politicians and how pointless they seem to be in giving us leadership and setting examples. The last conversation asked how people were dealing with the prospect of growing old alone and even though it was a heavy topic, it was a very lively discussion.

JMF: You talked about how technology affects creativity, but technology also affects how we have conversations, many of which happen online now, on various social media platforms. How is the dynamic different and why did you think it was important to take the discussion offline?

FP: Well, like how you and I are talking, you can look at my face, you can see my body language, I can react to you quickly, there's no barrier of a screen and I can really be real with you. What online conversations have done is created a whole generation of what people are calling keyboard warriors. People are able to throw insults, able to be threatening, abusive and all the rest of it and there are no repercussions most of the time. You don't get anything resolved that way. There's no real space when you have a conversation online with strangers to have that deeper reasoning. One of the challenges we found [with the event] is that a couple of people said we weren't engaging with the online audience — but that wasn't really the point. The point was for the people who were there to have those conversations, for people to listen and understand…

JMF: …And for people [online] to have conversations of their own.

FP: Exactly. I hope that people who were following online were able to find some way to have a conversation offline. That's the inspiration.

JMF: Did you have certain expectations of how the “real life” conversations would go?

FP: I was really happy at the synergy and the dynamics among the people who were taking part, because most of them did not know each other. I hoped for people to sit down, listen and engage. I hoped [there would be] some value from having a real life conversation with people that they didn't know, about things that they probably hadn't had to think about for a while.

Most people got the point of the exercise, which was to see people engage in a sensible, agreeable tone, friendly and respectful. I saw connection; I saw enthusiasm. People keep asking us to do it again — and we are! We realise there's potential for a series of conversations, particularly because we have two elections in the next year in Trinidad and Tobago.

The fact that people want to get more involved is a point of action: they were asking how they could participate. Getting people thinking about being involved in something like this is really important. We want people to be guided and inspired by just talking to each other. I don't want to say we want to change the world; just our little corner of it.

JMF: Nicola, what was it like taking part in Conversation Day TT? 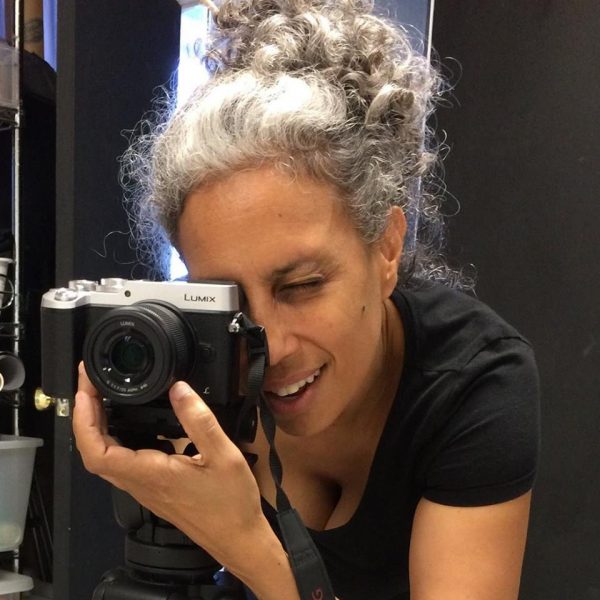 Filmmaker Nicola Cross, who participated in the conversation about growing old alone. Photo taken by Lesley-Ann MacFarlane and used with permission from Trini Good Media.

Nicola Cross (NC): I found the whole process great! It's on the right track — it's going to become whatever it is that it will become and the approach of the people involved is right — the openness, the quirkiness of some of the ideas, it wasn't all serious topics, the conversation flowed. It was really comfortable; the audience was just the right size to get a bit of feedback and there was an intimacy about it that facilitated people's honesty and openness. It felt like being in a living room.

The other thing that I think about a lot is who gets to have voice, because I have a thing about gatekeepers…

FP: Yes, we're being really careful to make sure we don't exclude so we're finding avenues — online, at the community level — for people to suggest who would be a good match to discuss different topics. We also plan to do this in other areas than Port of Spain [Trinidad's capital city] to get people talking.

NC: We [Trinbagonians] don't have a problem talking, but it must be more than that.

FP: It's also to resolve differences; to see that we aren't actually all that different. So when we do go around, especially before elections, we want to try and get people with opposing views to talk to each other. We're very aware of that.

JMF: I love the fact that this interview has now turned into a conversation. Do resolving those differences play a part in effecting change?

FP: I think so, organically.

Cross brought up the humanitarian crisis in Venezuela and the ensuing refugee situation that Trinidad and Tobago is grappling with as an example of difficult conversations that need to happen — and possibly be moderated by experts, considering that both online and off, members of minorities and vulnerable groups who have themselves been discriminated against have proven quite intolerant:

FP: They do. What really strikes me is that culture evolves, but we need to educate people about why it's happening. That's a good idea for a series of podcasts!