Despite the controversy, the Bhutanese government is continuing the program 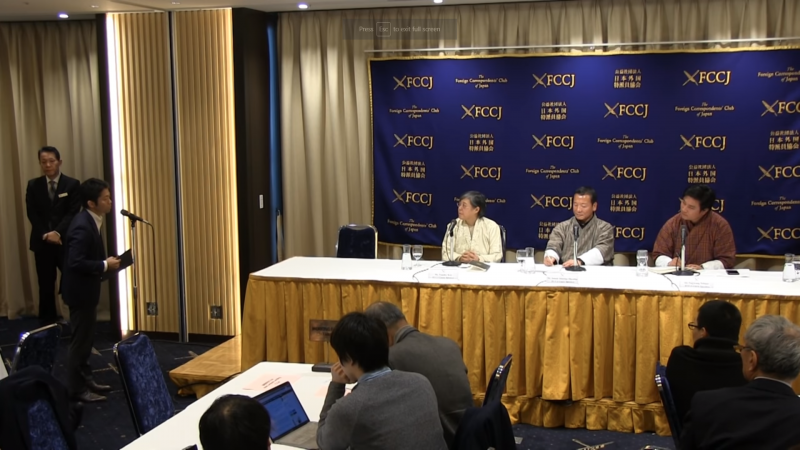 “The Plight of Bhutanese Students in Japan.” Representatives of Bhutanese Parents’ Committee of The Learn and Earn Program’ speak to media in Tokyo in February 2019. Screencap from the Foreign Correspondents Club of Japan YouTube Channel.

It all started as a very promising opportunity for Bhutanese students. Since 2017, the government of Bhutan has sent around 800 Bhutanese students to Japan under the “Learn and Earn” program as part of a drive to increase employment opportunities for citizens of the kingdom in the Himalayas.

The program, which is supervised by Bhutan's Ministry of Labour and Human Resources (MOLHR), matches students who travel to Japan and enroll in Japanese language schools with collateral-free loans provided by Bhutanese financial institutions, expecting that they will work to pay back the investment.

However, the reality was far from what the students expected. Students complained that they faced extortion, threats and hard times during their stay in Japan. In December 2018, a 24-year-old Bhutanese student committed suicide and several students contracted tuberculosis.

A pool of cheap, exploitable labor

Bhutan's overseas training and employment programs were first launched in October 2013 to bring about full employment for Bhutanese citizens. As part of the strategy, the government of Bhutan arranged a trainee program with Japan where Bhutanese students would be trained in Japan and bring back valuable skills that would make them employable once they returned home. At the program's inception, Bhutan's People’s Democratic Party (the political party in power at that time) had pledged to create 82,000 jobs by 2018.

The Bhutanese initiative takes advantage of Japan's “300,000 Foreign Students Plan“, an initiative launched in 2008 aimed at increasing the number of foreign students or trainees in Japan from 140,000 to 300,000 students by 2020. However, foreign trainees such as those coming to Japan from Bhutan on the Learn and Earn program typically end up as sources of cheap, exploitable labor, with little in the way of support from their Japanese hosts.

Many Bhutanese students in the Learn and Earn program took on loans, notably to cover the cost of round-trip air tickets to Japan, mandatory Japanese-language training, and housing. However, as Japanese employers pay trainees very low monthly wages, students needed to work at least two jobs and live in squalid conditions, in order to repay the loans. Students were contractually obligated to invest a considerable amount of time and high tuition fees on Japanese-language classes to achieve the N2 level in the Japanese Language Proficiency Test (JLPT) required for job placements.

Given their poor living conditions and diets, many trainees became sick from physical and mental stress. There were also reports of Learn and Earn participants being subjected to forced labor, and passport theft and illegal wage deductions by Japanese employers.

No prior research into living and working conditions

Five hundred Learn and Earn students are reportedly ready to file cases. Nagwang Tobgay, the legal officer of the Parents’ Committee of The Learn and Earn Program’ laid down the allegations in a press conference at the Foreign Correspondents Club of Japan in Tokyo in February 2019:

The parents alleged that Bhutan's Ministry of Labour conducted no research into working and living conditions in Japan for students before launching the program. The Labour Ministry had to suspend registration for the Learn and Earn program within five months of its introduction because of the overwhelming number of applicants.

Learn and Earn participants from Bhutan are also supposed to be received and assisted in Japan by Support for New Departure (SND), an organization affiliated with the Japanese government. The parents allege that SND did nothing to help the Bhutanese students, who instead faced extortion and threats from employers and others.

Prior to the 2019 press conference in Tokyo, questions had already been raised about the Bhutanese government's plan to send students to Japan.

After the student's suicide in 2018, the Bhutan Employment Overseas (BEO), selected as and licensed by Bhutan's Ministry of Labour in order to feed participants into Japan's Learn and Earn program, came under scrutiny in Bhutan. The country's Anti-Corruption Commission (ACC) called for the cancellation of BEO's trade license, which the ACC deemed to have been illegally granted.

In August 2018, Japanese journalist Idei Yasuhiro (出井康博) published an expose of the program in Foresight magazine which was translated into English by Bhutanese activists. In the report, Idei noted that:

The Japanese Government set up “the foreign students 300,000 plan” back in 2008. The goal was achieved in 2017, but in reality, the figure was attained by the increase of those students in disguise who, in reality, have come to Japan with a purpose of finding higher-paying work than the ones in their home countries.

Idei's investigation into the Learn and Earn program spanned six months and included communication with the Managing Director of BEO and his wife—who is a Japanese national— and the Ministry of Labour and Human Resources and the Consulate of Japan in Thimphu, Bhutan.

In the article, Idei narrates the story of a Bhutanese student who took a loan of Nu 700,000 (US$ 9,859) from Bhutan Development Bank and handed the sum in cash to BEO:

Dorji has two part-time jobs where he spends easily over 28 hours a week, which means he is working longer hours than he is legally allowed as a student visa holder in Japan. [..]

Dorji is now registered in a language school in Japan and has a morning shift 6 days a week. In the afternoon, he takes his Japanese lessons in school, and then for 3 to 4 days every week, after class, he goes for his night shift work in a warehouse where he packs lunch boxes for convenience stores. When he gets a night shift, he barely gets any sleep.

With his pale face and thin build, it did not come as a surprise when he said he had lost over 5 kg since arriving in the country. [..] Just like Dorji, most of the Bhutanese students are experiencing a series of hardship and misfortune in Japan in their debt-ridden lives.

However, according to Idei, Bhutanese Employment Overseas (BEO) promised students like Dorji:

You will earn an enormous amount of money in Japan as you have never seen before in Bhutan. Though it is illegal for you to work for over 28 hours a week in Japan, it won’t be hard to work around the laws. You can pay off your debts in no time.

Idei's report also states that the contract signed between Dorji and BEO stated that he would earn about 150,000 JPY a month. To make 150,000 JPY a month, the hourly wage should be 1,200 JPY at minimum, a way that is virtually unattainable for someone who does not speak Japanese.

Even if a student receives a hard-earned salary of about 150,000 JPY a month, more than 23,000 JPY of that would go to repayment of loans. Other monthly expenses would include rent (for shared housing) of 20,000 JPY, and tuition fees of 70,000 JPY (for a total of 800,000 JPY annually) for mandatory Japanese-language training.

Students are effectively stranded in Japan, as they must repay the relatively large loans before they can return to Bhutan.

So far, the Bhutanese government has responded by deferring the students’ loans. Labour minister Ugyen Dorji claimed that the issues faced by Bhutanese youth are not as severe as reported in social media and Bhutanese and Japanese media. He said that about 80 percent of young people placed in Japan are paying regular loan installments and that the government will continue the program.

Namgay Zam, the executive director of the Journalists Association of Bhutan contributed to this post.