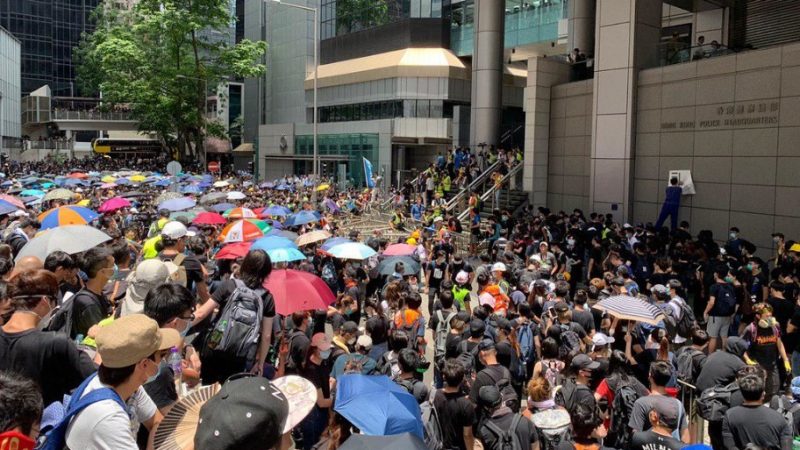 Thousands of protesters gathered outside the police headquarter on June 21 demanding independent investigation on police excessive use of force on June 12. Photo from inmediahk.net. CC: AT – NC

The following post was written by Jennifer Creery and originally published by Hong Kong Free Press (HKFP) on June 21 2019. This version is republished on Global Voices under a content partnership agreement.

Protesters demonstrating against Hong Kong's anti-extradition law flocked to the city’s legislature on Friday June 21, blocking roads around the government complex before surrounding police headquarters in Wan Chai as some moved east to the government Revenue Tower. The crowds dispersed peacefully at around 3am on the next day.

Student groups had vowed to escalate their actions if authorities did not answer by 5pm on Thursday to their set of demands, which include:

Clad in black, many protesters stayed overnight from Thursday into Friday at the rear of the legislature, forcing the government to announce the shutdown of Central Government Offices on Friday due to “security considerations.”

As more joined the protests on Friday morning, legislative meetings were cancelled and protesters moved to the police headquarters in Wan Chai. Later, the crowds would extend to the government Revenue Tower as well as to the Immigration Tower.

Addressing crowds outside police headquarters, pro-democracy lawmakers Lam Cheuk-ting and Au Nok-hin both declared that Secretary for Security John Lee, and Police Commissioner Stephen Lo, must step down after tear gas was unleashed against demonstrators on 12 of June. Au said:

Stephen Lo cannot ignore the incidents since June 12 – we must insist on our demands: absolve arrested protesters, investigate police’s abuse of power.

Senior police superintendent Yu Hoi Kwan told reporters that there were no plans for a clearance operation as yet, but the occupation around their headquarters had affected the deployment of emergency services. She urged the crowd to disperse. 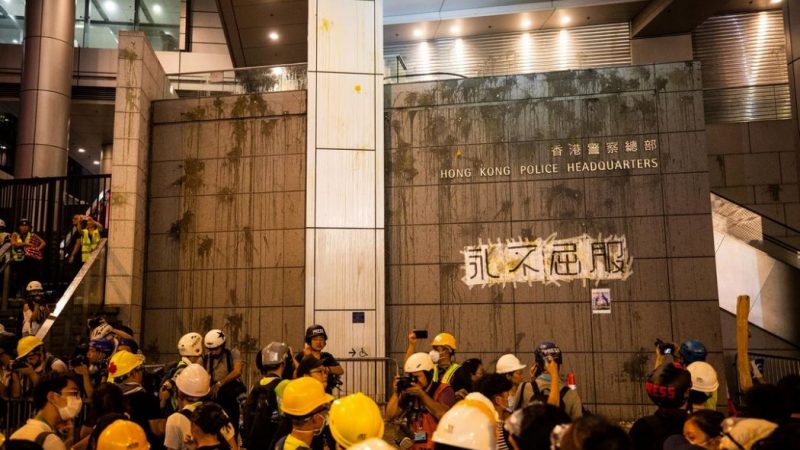 If there is a hard, high wall and an egg…

Jeers and chants of “release the righteous,” “retract,” and “shame on police thugs” were heard as crowds swelled. A few dozen eggs were thrown at the front wall outside the police headquarters, a symbolic act of people's resistance expressed by acclaimed Japanese writer Haruki Murakami:

If there is a hard, high wall and an egg that breaks against it, no matter how right the wall or how wrong the egg, I will stand on the side of the egg. Why? Because each of us is an egg, a unique soul enclosed in a fragile egg. Each of us is confronting a high wall. The high wall is the system which forces us to do the things we would not ordinarily see fit to do as individuals . . . We are all human beings, individuals, fragile eggs. We have no hope against the wall: it's too high, too dark, too cold. To fight the wall, we must join our souls together for warmth, strength. We must not let the system control us — create who we are. It is we who created the system.

Tsang Chui-mei, a 47-year-old visual artist, told HKFP she thought the extradition protests had become an opportunity to unite people from all walks of life:

All of the messages are from online. There is no single organiser or leader, it’s better this way. All Hong Kong citizens have a right to ask for freedom.

Lance Yan, a 48-year-old illustrator, told HKFP he joined the protest on Friday to protect young protesters in case of clashes:

We have a responsibility to protect them so that they’re not alone.

Twenty-three-year-old Celia Lai, who works in marketing, told HKFP she attended the protest on Wednesday but considers herself a “coward” for failing to go to the front lines. “I want to do more this time,” she said.

“We don’t have a leader this time,” she said, referring to the 2014 Umbrella Movement led by student groups:

It’s more pure and self-motivated, and people are acting on their own will and they’re more determined.

The latest occupation comes after weeks of protests against legal amendments of the Fugitive Offenders Ordinance and the Mutual Legal Assistance in Criminal Matters Ordinance proposed in February, which would empower Hong Kong's government to handle case-by-case extradition requests from jurisdictions with no prior agreements – notably China.

Lawyers, journalists, foreign politicians and businesses have raised concerns over the risk of residents being extradited to the mainland, which lacks human rights protections. Taiwan has also made it clear that, if the new law was passed, it would not receive the murder suspect whose case triggered the proposal.

The government announced the suspension of the bill on June 16, after 2 million people rallied on streets of the City calling for the Chief Executive Carrie Lam to step down.

For more about the protests, read Global Voices’ special coverage of the events.