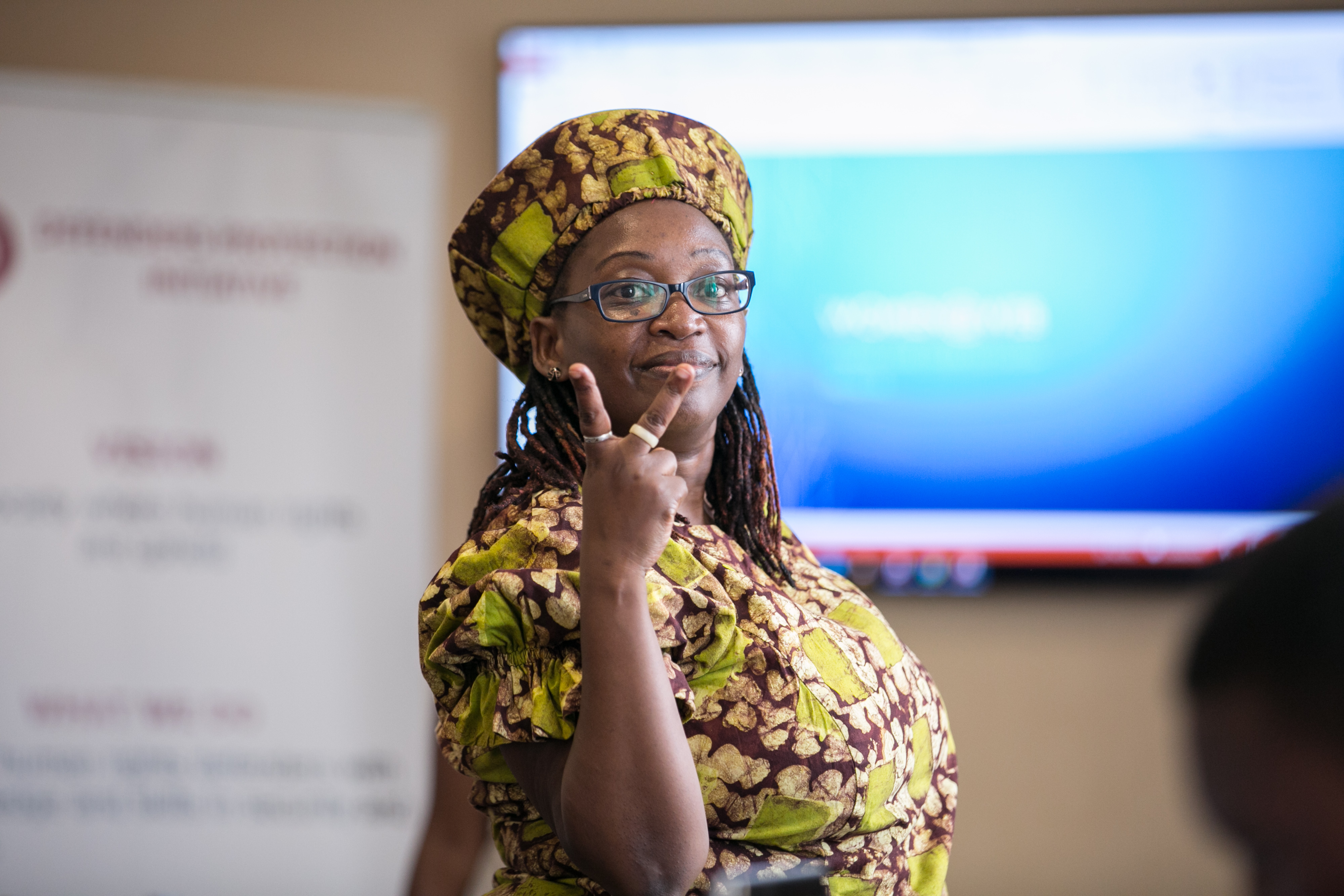 On Friday, June 21, a court in Uganda’s capital, Kampala, ruled that jailed feminist scholar and activist Stella Nyanzi has a case to answer and should prepare to defend herself. The case arises from a poem by Nyanzi — a reflection on the birth and misrule of Uganda’s long-serving President Yoweri Museveni, in which she evokes representations of vaginas — including his mother's.

On Wednesday, June 19, 2019, prosecutors closed their case after presenting three witnesses. Nyanzi's lawyer then asked the court to declare that there is no case to answer and ordered Nyanzi's release.

But on June 21, 2019, the courts decided that Nyanzi does have to answer to these charges and will not yet be released and reunited with her three children.

Nyanzi, known to deploy radical rudeness and public insult as a tactic to challenge Museveni's power, has been held at Luzira maximum security prison since November 2018.

Nyanzi faces two counts of cyber harassment and offensive communication, each under the Computer Misuse Act of 2011.

In count one, prosecutors alleged that Nyanzi, in a Facebook post dated September 16, 2018, made “obscene, lewd and indecent suggestions” with the vagina references — deemed cyber harassment.

In count two, the state claims she transmitted the post “over the internet to disturb the peace, quiet or right to privacy of President Museveni with no purpose of legitimate communication” — deemed offensive communication.

Nyanzi's lawyers submitted to the court that there was no case to answer after the prosecutors produced three witnesses: two investigating officers in the Uganda police, and lawyer Charles Dalton Opwonya, as a member of Uganda’s Anti-Pornography Committee, made an unlikely expert witness.

Nyanzi's ongoing trial before Magistrate Gladys Kamasanyu has been one of the most animated on record. Opwonya was the witness that took center stage as he was tasked by Nyanzi’s defense team to prove his qualification in matters of morality:

Q: Is vagina a dirty word?
Opwonya: most of the time it is

Q: is the literal vagina a clean thing?
Opwonya: yes
Q: Can a vagina be dirty
Opwonya: yes if you don't wash it#FreeStellaNyanzi #PushforStellaNyanzi pic.twitter.com/UGMpkE80WB

On June 18, in a cross-examination that took more than six hours, Opwonya claimed Nyanzi’s post about Museveni’s birthday — from which the charges stem — harmed and broke his children’s innocence.

He said Nyanzi was “ a vile subject” since her nude protest back in 2016 at Makerere University. Opwonya was cross-examined on a range of issues connected to the case, from Bible proverbs to nude protests, to feminist literature to the question of whether Uganda’s president is a dictator.

Cross- examination of state witness 2- lawyer Charles Dalton Opwonya the man who reads the Bible in French because English is a shallow language ?#FreeStellaNyanzi #PushforStellaNyanzi pic.twitter.com/MZD98OEshu

Nyanzi's tactics in her writings about the powerful, like dysphemisms and euphemisms, were brought into play. Opwonya condemned Nyanzi for being obscene and told the court that the word vagina should never be spoken in public.

The trial not only centered on Nyanzi’s use of social media but Opwonya's as well:

On the eve of her 45th birthday on June 16, Nyanzi released #45Poems4Freedom, poems full of commentary on the president and parliament and also addressed themes like feminism, oppression, prison congestion, sexual harassment and press freedom.

Nyanzi reiterated that she will not be gagged.

Many Ugandan and African netizens shared the poems, and the hashtag trended alongside #PushForStellaNyanzi and #FreeStellaNyanzi:

As Stella Nyanzi spends her birthday in prison here is 1 of #45Poems4Freedom #StellaSpeaks, lets keep the campaign to #PushforStellaNyanzi pic.twitter.com/Nus6rA27lk

Netizens shared powerful phrases from Nyanzi's poetry collection, such as “women shall no longer wait for timid men…”

“Women shall no longer wait for timid men

To fight for the liberation of Uganda

And shoot our truths at the dictatorship”

Netizens came through with political cartoons and commentary on the state of press freedom in Uganda, depicting Nyanzi in a jail cell for speaking her mind online:

PRESS FREEDOM IN UGANDA
A soul-less ape-like monster
Sits at the helm of power in our state house
Just like a limelight intoxicated superstar
He saturates our public media with vows
Although the masses know he’s a lying fraudster
They clap their hands and gasp with “Wows!” pic.twitter.com/DMBx91LDix

Many continue to send support for Nyanzi, who has become not only a household name in Uganda but represents the defiant spirit of African women at the front lines of change:

Today is Dr. Stella Nyanzi’s 45th birthday and she’s spending it in prison for speaking truth to power. We honour her by sharing one of 45 poems she wrote from her prison cell in Luzira. #PushforStellaNyanzi #FreeStellaNyanzi #StellaNyanziDay https://t.co/oaT38bcAl9

This??? @drstellanyanzi‘s poems are refreshing. In a few lines she sums up the plight and deep seated emotion of the average, unconnected Ugandan. The one who cheers in the presence of the oppressor; the one who cheers to hide their pain and anguish. Wow. #FreeStellaNyanzi https://t.co/B3NMREjNKJ

Answering to the courts

After the June 21 ruling, Nyanzi's defense lawyer, Isaac Semakadde, told the court that they would present about five “learned” witnesses in answer to the charged. He told reporters that Nyanzi's witnesses would come from several disciplines from law to religion to literature.

Nyanzi said she was not surprised by the ruling and hopes through her witnesses, the case will be a great tool to educate the nation. She declined her right to bail, saying it is a tool of oppression and those on bail lack freedom.

On June 26, Nyanzi's witnesses are expected to appear in court as her trial continues.

She still faces charges of cyber harassment and offensive communication from April 2017 over a Facebook post in which she called President Museveni “a pair of buttocks,” which prosecution still states was an obscene or indecent suggestion. For this case, she was remanded to Luzira prison for two weeks and later released on bail. The case is coming up for mention on July 1.

Nyanzi has also challenged her sacking from Makerere University. The court decision on that case will be delivered on October 16, 2019.