Handcrafting behind bars: Women inmates in Albania create ‘made in prison’ accessories 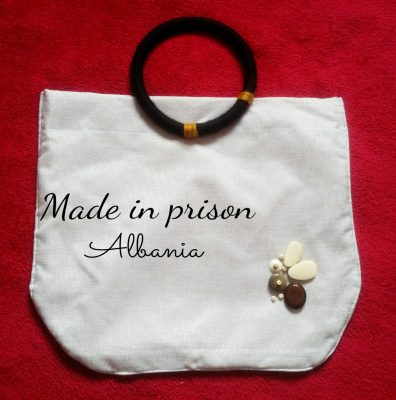 Handmade products by women inmates, involved in the Made in Prison initiative in Albania. Photo: madeinprison.al, used with permission

Made in Prison is a website that sells handmade products by female inmates of the Ali Demi prison in Tirana, the only prison for women in the Balkan country whose population totals 2,8 million.

The project is an initiative by Orkidea (meaning “the orchid” in Albanian language), a local women's rights NGO, and has received funds from the US Embassy in Tirana. Since its launch on March 8, 2019, the project has been endorsed by Albania's Ministry of Justice and the General Directorate of Prisons.

As of June 12, the inmates have produced 235 handmade products, of which 82 have been sold to both Albanian and overseas costumers through the website, Orkidea has told Global Voices via email.

All the proceedings from the sales go to the personal bank accounts of each product's respective craftswoman.

On a testimony published at  the Made in Prison website, one inmate recounts how the project has positively affected her life:

My name is Mira. I am serving my sentence at the women’s prison since two years and a half now. I have learned many things here. The services offered are helping me change my life. I feel like a normal person again. I have been sentenced 3 years in prison and everything was hard, but now you are helping me to see a hopeful life.

Orkidea currently pays for the products’ materials, but participants have expressed a desire to cover some of those costs themselves in the future, as a way of turning the initiative into a sustainable business model.

Here are some of the products sold by Made in Prison.

A pair of earrings:

According to the European Prison Education Association (EPEA), Albania has 23 detention facilities. Ali Demi is the only one exclusively for women. There is also one hospital for detainees.

There are no known “gangsters’” in this prison, no kidnappers, and no women of high-profile political scandals. Many of them, without creating misunderstandings, are “accessories” of crimes committed by males, who might have been their husbands, brothers or, lovers. The most serious crimes perpetrated by these women are prostitution, burglary, fraud (embezzlement) and not by its importance, murder due to family circumstances.

The dark past of the Albanian prisons

Albania's prisons, labor camps, and internment facilities during the communist period have often been described as places of horror.

For many Albanians, Spaç is synonymous with torture and death. Countless dissidents and thousands of other individuals were imprisoned here before the 1990s. Photo by: Attila Terbócs (CC BY-SA 4.0)

One of them is the Spaç prison, in Lezhë County. According to World Monuments Fund, an organization dedicated to the preservation of historic architecture and cultural heritage sites around the world:

Spaç Prison was a notorious labor camp established in 1968 by the Communist government of Albania at the site of a copper and pyrite mine, in a remote and mountainous area in the center of the country. While only one of many such sites, the political prisoners held at Spaç included some of the most prominent Albanian intellectuals of the twentieth century.

Now, Spaç prison is a place of remembrance for locals and a tourist attraction.

According to Albania’s Association of Former Political Prisoners, about 5,577 men and 450 women were executed for political crimes during the communist era from 1946 to 1991. Tens of thousands were imprisoned or sent to labor camps.

Since the fall of communism, Albania's prisons have been criticized for its poor conditions, with issues such as overcrowding, limited access to natural light in cells, and lack of hygiene often cited as examples.

The Council of Europe has recommended Albanian authorities to increase efforts to protect prisoners’ human rights and support their rehabilitation.

The Made in Prison initiative could contribute to reintegrating women prisoners back in society after their release.