Critics called the amendment 'undemocratic' and 'a retrograde step' 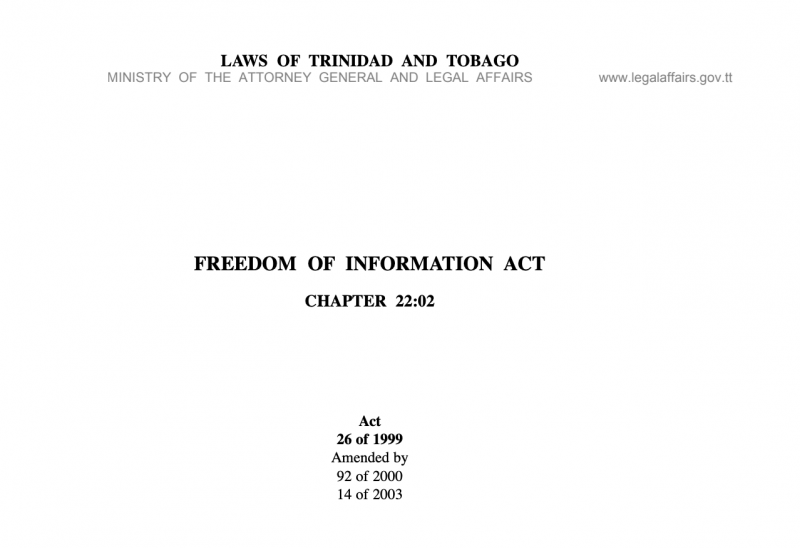 Screenshot of a PDF of Trinidad and Tobago's Freedom of Information Act, 1999

Under pressure from the public, Trinidad and Tobago's government on the night of June 17 withdrew a controversial amendment it was proposing to make to the country's Freedom of Information Act (FOIA).

The Act, passed in 1999 and in effect since 2001, allows members of the public to seek access to information held by public authorities. Applicants filing FOIA requests are supposed to receive a response within 30 days.

In early June, however, the government proposed an amendment to the Act which would have extended the allowable response time to 90 days, prompting an outcry from over 47 groups, including the Law Association, Chamber of Commerce, and the Trinidad and Tobago Media Association (MATT), who held a forum on the matter on June 15. Many stakeholders and civil society organisations believed that the proposed amendments had the potential to frustrate the work of a free press, as well as prevent the public from accessing information in a timely manner.

MATT president Sheila Rampersad, interviewed on television on the morning after the withdrawal was announced, said that:

“It's a morning when people should be very proud of Trinidad and Tobago and very proud of a democracy that obviously is quite healthy—that civil society came together quickly and comprehensively as it did, and that government was sufficiently responsive.”

Amendment slammed as ‘undemocratic’ and ‘retrograde’

The amendment to the Act, called Clause 7, formed part of an omnibus bill called The Miscellaneous Provisions (Tax Amnesty, Pensions, Freedom of Information, National Insurance, Central Bank and Non-Profit Organisations) Bill, 2019. The initial draft of the Clause not only extended the time for state agencies to respond to requests from 30 days to 90, but also proposed the addition of another 90 days in which the attorney general could either endorse or overrule the decision to deny the request.

In practice, the turnaround time for responses to FOIA requests was often longer than the prescribed period, and some state bodies have refused to release information, citing confidentiality. The government would often find itself embroiled in lawsuits when FOIA requests were denied, with some litigants taking their cases all the way to the Judicial Committee of the Privy Council, Trinidad and Tobago's highest appellate court.

Former attorney general Ramesh Lawrence Maharaj, the architect of the original Act, came out strongly against a sitting attorney general—a political appointee—having the final say on whether or not a request would be denied, calling it “undemocratic.” Maharaj even suggested he would initiate legal proceedings and launch a campaign if necessary to advocate for public consultation in the matter.

The amendment was on the parliamentary agenda on June 10. Attorney General Faris Al Rawi admitted he had misjudged the response, but dismissed the need for consultation on the amendment, which was debated and passed in the Lower House on June 14 and 15 June 15.

Attorney Michael Rooplal of the Assembly of Southern Lawyers called the amendment “a retrograde step,” noting the senselessness of making such a shift in at a time when digital technology makes it easier to store, retrieve, and organise information. Rooplal added that:

“The FOIA is a vital cog in the public’s right to know and right to participate in the administration of our democratic society. Any derogation of these rights should be strongly guarded against, particularly in the present circumstances where there has been absolutely no consultation with the public on this issue.”