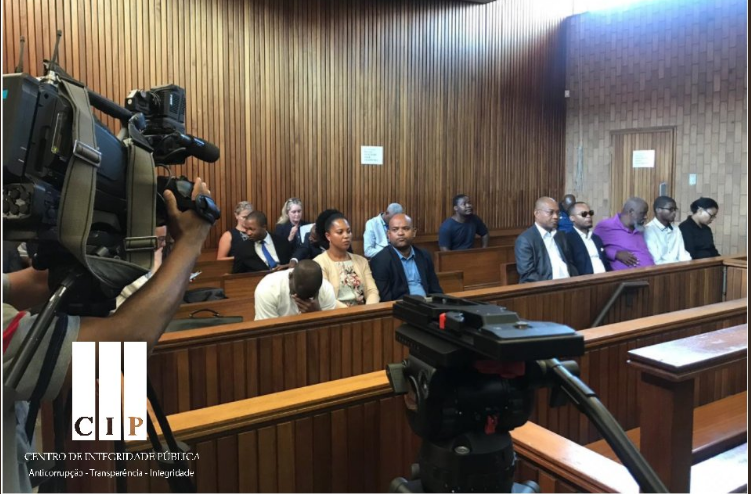 Courtroom with the ex-Minister of Finances. Photo: Centre for Public Integrity, used with permission.

On 4 June, Mozambique’s Constitutional Council, the country’s highest judiciary body, declared null [2] the guarantees from the Mozambican state for debts acquired by public companies during the previous government, a move welcomed by many citizens.

Since 2015, Mozambique has seen the unfolding of a corruption case [3] named “hidden debts” or “illegal debts” by local media. Three public companies (EMATUM, MAM and ProIndicus) contracted debt during the government of then-president Armando Guebuza without the approval of the Assembly of the Republic, as the constitution requires in these cases.

The debt totals over two billion dollars, which has led several of the country’s partners, among them the IMF and European countries, to cut financial support to Mozambique.

The Constitutional Council’s decision on 4 June followed an appeal [4] from civil society organizations. A petition asked that the council declare null the guarantee given by the Mozambican state for these debts, with a particular focus on the Mozambican tuna company (EMATUM).

EMATUM's debt was the first to be discovered and to come under the international media's spotlight in 2015 whereas the other two only came to light some time later.

It was in 2017 that the Forum for Budget Monitoring [5] (FMO) — a platform of civil society organizations focused on public finances management – submitted a request for the EMATUM debt to be declared unconstitutional and withdrawn from the state budget.

After the decision on June 4, 2019, the FMO shared a copy of the request they had submitted to the Constitutional Court, as well as the nullifying declaration:

The Constitutional Court of #Mozambique declared the acts related to the loan contracted by EMATUM null. Read the petition and the agreement in the link below

Adriano Nuvunga, an activist and university teacher, was one of those at the forefront of pushing the case and on Twitter said that he was in tears after hearing about the historic decision:

Historic!!!!!!!!!!!! Constitutional Council declares null #EMATUM and the respective #sovereign guarantee! A struggle by civil society and @FMO_Moz in particular and VICTORY of the #Mozambican #People. I’m in tears! Thank you Constitutional Court

The Centre for Public Integrity enthusiastically celebrated the event. Early this year it launched a campaign on social media, using the hashtag # [24]EuNaoPagoDividasOcultas [24] (I’m not paying hidden debts) so that Mozambicans could oppose any payment of the debts. On Facebook, it expressed its pride with the achievement:

I’m not paying hidden debts, not even with gas!

Despite the enthusiastic celebration from many Mozambicans, a lot still needs to be clarified. Mozambique’s debts have links to bodies outside the country, and the current decision may not be applicable internationally.

The fact that the debt was contracted through institutions outside Mozambique means that the USA has an interest in seeing the case resolved under its courts, with bankers and businesspeople from Switzerland, Albania, and Dubai facing imprisonment.

Clearly showing the uncertainty over the steps to come, President Filipe Nyusi [29], who on the day after the decision was headed to the Constitutional Council to submit his candidacy for the elections to be held on 15 October, said:

The Constitutional Council made the decision that it made and we as Frelimo [the ruling party], we as the government, will continue to follow the trial to see and in due course possibly, when we have all the documents finalized we will say what the next step is.

The legal representative of the debt holders stated publicly that the Constitutional Council’s recent decision will ultimately change nothing, as Mozambique’s government undertook [30] a commitment governed by international rules, which in other words means that Mozambique will still need to pay the debt.

On the day after making the decision, the president of the Constitutional Council, Hermenegildo Gamito, resigned from office, which is a first for a presidentially-nominated position:

The Constitutional Council’s decision adds to the government’s recent decision to also annul the linking of guarantees [33] of debt payments to future revenues from gas exploitation. Mozambique's Finance Minister justified the withdrawal of these revenues from negotiations with creditors of the state's hidden debts due to public perception.