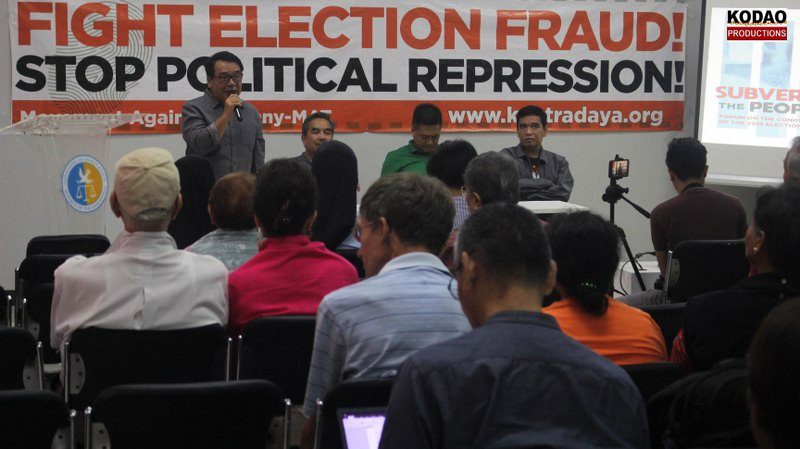 A forum discussing some of the problems that hounded the 2019 midterm elections in the Philippines. Image by Kodao Productions, a content partner of Global Voices

The Philippines conducted its midterm elections on May 13, 2019, which saw candidates belonging to the coalition endorsed by President Rodrigo Duterte dominating the senate race. But despite the near-landslide victory by the ruling party, there were surprise winners in some local and congressional seats which raised the prospect of the possibility of reforming the country’s politics. The newly elected officials will assume office on July 1, 2019.

The election was marred by reports of irregularities, election-related violence, massive vote buying and even an admission of fraud from the president himself. But despite these challenges, some opposition candidates prevailed and were able to get themselves elected to office. There were also young candidates who successfully ran against incumbent officials belonging to prominent political families.

With total combined votes of 2,236,155, the left-leaning Makabayan (Patriotic) coalition will have 6 seats in the incoming 18th Congress, despite being attacked by state-backed security forces during the campaign period.

As fierce critics of the Duterte government, Makabayan party members and representatives were targeted by disinformation campaigns, red-baiting, and even trumped-up charges leveled by state actors and groups supportive of the president.

A number of Makabayan campaigners were also killed during the election campaign.

In the days leading up to the May 13 elections, false information spread that Makabayan party lists has been disqualified from running in the election.

On election day itself, uniformed policemen were caught on video giving out newsletters criticizing Makabayan party lists near a designated polling precinct in Manila, the country's capital. Election watch group Kontra Daya called out the act as violating the Omnibus Election Code, which prohibits the presence of police or other armed security within polling venues. The law also prohibits the police and armed forces from engaging in partisan activities.

The Duterte administration can no longer play the same old tune on us, his online troll army would get him nowhere in the face of the people’s legitimate outcry for their basic socio-economic demands, the youth’s access to free education, right to basic social services, defense of our national sovereignty, among others. These are the pressing issues that the government should address, instead of feeding fake news.

In Pasig City, the 29-year reign of the Eusebio clan was ended with Victor Marie “Vico” Sotto defeating incumbent Mayor Bobby Eusebio in the mayoral race. The young Vico Sotto captured public interest with his non-traditional views on politics and governance.

Following the work of Cong. Sarah Elago and incoming Mayor Vico Sotto has been giving me hope, so far. Every day, I keep my fingers crossed that they stay the course.

Isko Moreno winning over Erap and Lim. Vico Sotto over Eusebio. Zamora defeating Estrada. Small glimpses of hope that I hope will translate to a national scale 🤞🏻

Truly happy for the historic wins of Isko Moreno, Francis Zamora, and Vico Sotto! So much young blood taking on mayoral positions this term.

In spite of these opposition successes, the struggle for meaningful change, just governance and national progress will continue for the next three years. But these small victories are expected to be the foundation for change in the run-up to the presidential elections scheduled for 2022.

Squabbling over the spoils

Even before taking their Senate seats, however, some newly elected senators have already ruffled the feathers of their senior colleagues, as some of them have set their sights on chairmanships of senate committees. For a Philippine senator, chairing a committee is very important as it gives the individual senator access to important resources and influence in the conduct of the upper chamber's legislative work.

Imee Marcos, neophyte senator and daughter of former dictator Ferdinand Marcos—and herself the subject of a graft case—has set her eyes on the committee on ways and means. This committee has jurisdiction over all matters relating generally to revenue: taxes and fees, tariffs, loans, and other sources and forms of revenue.

The president's former personal aide, Bong Go, who will start his first term as senator, is set to assume the chairmanship of two committees: health, and urban planning, housing, and resettlement. This was confirmed to the media by no less than Senate President Vicente Sotto, III.

Widely considered to be “the direct link” between the Senate and the president, all eyes are on the neophyte senator. With the upper Chamber dominated by Duterte's candidates and allies, the activities of the Senate will be closely monitored.