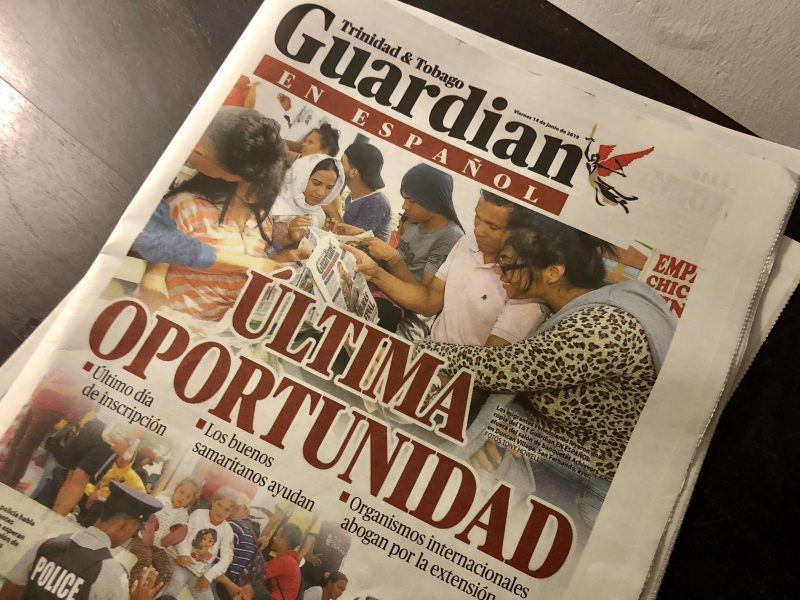 The Guardian, one of Trinidad and Tobago's daily newspapers, launched a Spanish supplement this week targeted at the local Venezuelan community. Photo by Georgia Popplewell (CC BY SA)

Venezuelan migrants in Trinidad and Tobago had until 5pm today, June 14, to register to regularise their status in the country. The two-week exercise, which began on May 31, is the latest move by the Trinidad and Tobago government to manage the influx of people fleeing strife and hardship in Venezuela and settling in the small Caribbean nation.

The government said the registration exercise went smoothly, reporting that 13,993 migrants had been processed by the end the day on June 13, and issuing assurances that all who appeared at the centres by the deadline would be processed. One local TV station, however, reported that some migrants who attempted to register in Tobago on June 14 were not accommodated. As the registration period ended on June 14, Minister of National Security Stuart Young announced that from June 17, Venezuelans will require a visa to enter Trinidad and Tobago.

Young: I have signed an order that says we now require Visas for Venezuelans to enter Trinidad and Tobago from this coming Monday.

For some citizens of Trinidad and Tobago, however, the spectacle of people from the beleaguered neighbouring country receiving what some perceive as special treatment has been too much to bear.

On the evening of June 13, protestors gathered in front of the registration centre at the Queen’s Park Oval in Port of Spain demanding the resignation of Prime Minister Keith Rowley and the “closure” of the country’s borders. One of the protest organisers, a social media personality called Kia “Rankin Boss” Hosein, told the Trinidad Express that the protest was motivated not by anti-immigrant sentiment but by what she alleges are illegal actions on the part of both Venezuelan migrants and the government of Trinidad and Tobago. “Hosein said Venezuelans had broken the law by entering the country illegally,” the Express reported, “and the government has broken the law by allowing them to stay.”

I can't help but feel a deep sense of sadness tonight, as a group of our people stage a protest calling for government to close the borders between Venezuela and Trinidad and Tobago. Where is your humanity?

The Express reported that other protestors shouted anti-immigrant slurs and “motorists passing by honked their horns in support and shouted ‘send them back Venezuela'”. Riot police were called in to secure the area.

I live in a terminally ill country. Shameless and primitive. If you support tonight's taunting of refugee seekers at the anti-immigration protests, you are a sick fuck.

Hosein also told the Express that “. . . charity starts at home. We are already sinking in Trinidad and Tobago so how can you take in more people?”—a common theme among social media commentators on the Venezuela migrants issue.

Prime Minister Rowley expressed similar sentiments back in April 2018, after 82 Venezuelans were deported from the country. Responding to criticism of the deportation and of the country’s slowness to accord refugee status to Venezuelans, Rowley said that: “Bearing in mind we are not China, Russia or America, we are a little island. We have limited space. 1.3 million people. Therefore we cannot and will not allow UN spokespersons to convert us into a refugee camp.”

On the afternoon of June 14, members of the June 13 protest greeted opposition leader Kamla Persad-Bissessar as she arrived at parliament with cries of “Rowley must go!” In an interview with media, Persad-Bissessar, who, along with other members of the opposition, has been critical of the Rowley administration's response to Venezuela, said that the government has “no fixed policy and seems to be taking it on the fly, one minute at a time. . . they seem to be very unaware of the anger and the pain and suffering in the country.”

Local businesses have nevertheless been quick to seize the economic opportunities presented by the Venezuelan presence in the country.

One manufacturing company was reportedly handing out information on employment opportunities and job application forms to Venezuelans waiting in line at the registration centre in southern Trinidad, and some employers are said to be including Spanish text on employment forms. Over the last few years, Venezuelans in Trinidad and Tobago have increasingly been occupying minimum wage jobs that some business owners say locals are either reluctant to do or don't perform as reliably.

This week the Trinidad and Tobago Guardian, one of the country’s three daily newspapers, began publishing a Spanish-language supplement targeted at the local Venezuelan community.