Why are Hong Kong authorities labelling the anti-extradition demonstrations as “riots”? 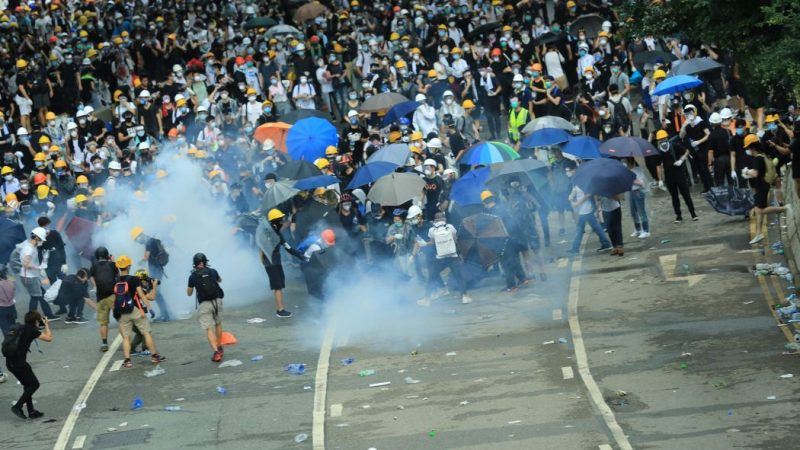 Clashes between protesters and police on June 12, 2019. Photo from inmediahk.net. Used with permission.

On June 12, thousands of protesters blocked major roads in central Hong Kong around government headquarters to stop officials from presenting a controversial extradition bill to the lawmakers in the Legislative Council.

After the police labelled the protests as a “riot” at around 4 p.m. on the same day, they deployed around 150 rounds of tear gas, and fired 20 bean bags and several rubber bullets. Chief Executive Carrie Lam Cheng Yuet-ngor slammed the protest as “a blatant and organized riot” in an evening video address on the same day.

By 5 p.m. on the next day, the Hospital Authority stated that a local hospital received about 81 injured reports. Among the injured, there were 57 males and 24 females, aged between 15 and 66. Two of them are in serious condition. Hong Kong Police Commissioner Stephen Lo later stated that the police had arrested 11 people, and stressed that the police officers were “very restrained” when carrying out their duty.

A large number of civic groups slammed the “riot” label as “ludicrous”, claiming that the majority of the protesters were peaceful and had not engaged in violent acts.

Two doctor organizations were among the first to condemn the police measures. In an open statement, Hong Kong Public Doctors’ Association and Frontline Doctors’ Union condemned the police’s excessive violence:

We express our grave concern and condemn the use of excessive violence in the handling of the protests, including unrestrained use of tear gas against protestors in the early stage. We denounce the inordinate employment of weapons against unarmed protestors, such as bean bag rounds and rubber bullets, aimed at the heads of protestors and journalists. These reckless actions are not aimed at dispersing or controlling crowds. Many citizens, medical workers, and journalists have been injured by the police’s excessive use of violence.

Other abusive cases involved a teacher shot by a rubber bullet in his right eye and a Radio Television Hong Kong (RTHK) driver whose heart stopped beating after he was hit by tear gas round.

Below is a compilation of police violence on June 12:

During the clashes, several journalists were injured by pepper spray and tear gas. Journalist watchdog organizations Hong Kong Journalists Association and Reporters Without Borders condemned the police for harassing and attacking reporters.

Twitter user @sethchiu posted a video clip showing how a number of riot police officers beat up an unarmed citizen and chased the reporters away.

Witnesses from the “riot” scene

According to various reports from local media outlets, the June 12 roadblock protests had been non-violent until around 3:30 p.m, when a few dozen protesters, a few armed with bricks and iron sticks, attempted to break in the Legislative Council protest area.

In response, police officers retreated to a corner of the protest area, while other peaceful protesters moved in and occupied the space.

At around 3:45 p.m., the police started firing tear gas and rubber bullets at them, later claiming that they had been cornered by protesters.

Below is a news report from Now TV showing the clashes outside the Legislative Council protest area that triggered the “riot”:

However, the clashes were confined to a small area. Twenty Christian pastors who witnessed the events stressed that the majority of the protesters were peaceful in a press conference on June 13.

Pastor Wong Sui Yong told the press that he had been staying with other Christians at the civic square outside the government building near the Legislative Council since 7:30 a.m. on June 12, and that he saw no violent protesters. According to the story by Citizen News:

At around 3 p.m., the police deployed tear gas, young people were dispersed, some were crying on their ways. But the police kept pushing forward. He stressed the protesters were not rioters, “what I saw was that the riot police was waving their batons at unarmed protesters on the pedestrian crossover.”

Another Christian pastor, Wu Chi Wai, criticized mainstream media for their bias in the way they reported the news. Citizen News says:

“Edited reports exaggerated the clashes,” [the pastor said]. He stressed the protesters in the front line only used umbrellas to defend themselves. People got injured when the iron barricade was pushed down. If the police officers had to protect themselves, they could use appropriate forces. But they used batons to beat up unarmed protesters. This is unacceptable.

Wu said the retreat of the police to the corner of the Legco protest area had created more chaos, “it was like inviting the protesters to occupy the space and create a pretext for deploying tear gas,” he said in the press conference.

Similar police strategies of “retreat” and “attack” was seen at other protest sites. Another example was recorded by reporters from initium.net at the conjunction of Tin Wa Avenue and Harcourt Road:

Five minutes later, the riot police at the Avenue deployed tear gas and rubber bullets at protesters. At around 4:00 p.m. the police authority labelled the protests as “riot” in a press conference.

@newbloommag reported on the clashes from Harcourt road:

Thousands of dispersed protesters had taken refuge at the Pacific Place, a high-end shopping mall at Admiralty in the evening of June 12. Facebook user Pak Chai shared the following photo he took outside Pacific Place, which made the audience wonder who in fact were the rioters: 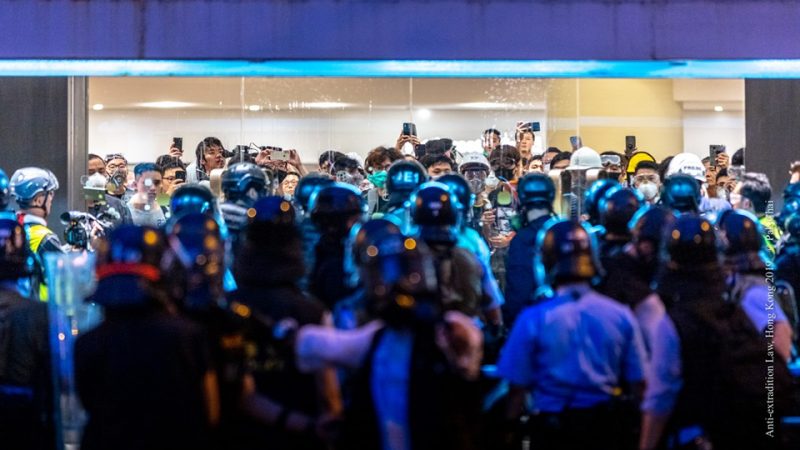 Photo taken by Pak Chai outside the Pacific Place at Admiralty. Used with permission.

The secretary of the Legislative Council announced on June 13 that the scheduled second reading of the extradition bill will not take place this week.

The road block protests on June 12 were triggered by the Hong Kong government's decision to proceed with the reading of a controversial extradition bill. The bill consists of a set of amendments to the Fugitive Offenders and Mutual Legal Assistance in Criminal Matters Legislation.

On June 9, more than a million Hong Kong people rallied against the government's proposal. The majority of the protesters believe that the amendments, which empower the Chief Executive and local courts to handle case-by-case extradition requests from authorities in mainland China, Taiwan and Macau, would make it easier for mainland China to arrest critics, dissidents, and even journalists in Hong Kong.