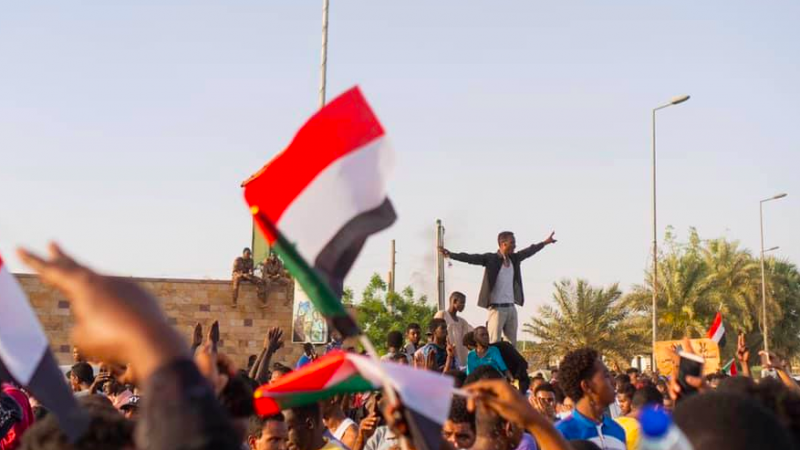 The Advox Netizen Report offers an international snapshot of challenges, victories, and emerging trends in technology and human rights around the world. This report covers news and events from June 1-13, 2019.

Uncertainty has dominated Sudan since the military ouster of long-standing president Omar Al-Bashir in April. Although pro-democracy protesters were initially in talks with the Transitional Military Council, negotiations have faltered and protesters have returned to the streets.

Tensions between protesters and authorities have escalated and the Rapid Support Forces, whose members are veterans of the militias responsible for Darfur’s worst massacres, have killed more than 100 protesters and there have been numerous reports of rape and robberies of civilians stopped at military checkpoints. Nevertheless, Sudanese citizens have continued to push for a transition to a civilian government, and launched a mass general strike on June 9.

Since June 3, technical testing by NetBlocks has confirmed that mobile internet connectivity has been shut off, drastically reducing people’s abilities to communicate, share or access information. The shutdown strongly affected Facebook users who were relying on the platform to organize demonstrations and the strike.

While most civilians (who rely on mobile internet connections)  are now cut off from the platform, the Rapid Support Forces are still actively using Facebook, likely through a fixed connection, to promote their own narrative about what is happening in the country. Sudanese activists have organized a petition campaign, demanding Facebook remove these pages in recognition that they promote violence against peaceful protesters in Sudan.

Sudan is not the only African country grappling with internet cuts this June. In Liberia, on June 7, media groups reported that many people were struggling to access major social media services during an anti-government protest in Monrovia, the capital. Technical testing by NetBlocks indicated that major social media and communication services including WhatsApp, Facebook, Twitter and Instagram became inaccessible on the country’s two major telcom networks, owned by Orange and Long Star. Civil society groups are calling on the two telcos to make a public statement explaining what caused the outages.

In Ethiopia, where internet shutdowns are not unusual, NetBlocks observed a total internet shutdown on June 11, believed to have been triggered by education officials seeking to prevent students from cheating on national secondary school exams.

Amid mass protests in Hong Kong, Telegram has become a target

A proposed extradition law in Hong Kong has triggered the largest protests seen since the 2014 Umbrella Movement, bringing hundreds of thousands of people to the streets. As demonstrations continued this week and turned dangerous, with police arresting at least a dozen protesters, the secure mobile messaging service, Telegram, came under attack. Telegram CEO Pavel Durov tweeted on June 12 that the company’s servers had been temporarily compromised by a distributed denial of service (DDoS) attack, the result of thousands of requests sent to Telegram’s servers, in an effort to overwhelm the system. Durov said the requests came mostly from mainland China.

Meanwhile, the administrator of a massive Telegram messaging group called “International Waters” (公海總谷) was arrested by Hong Kong police for “conspiring to commit a public nuisance.” The group had become an organizing platform for protesters. The police asked the administrator to unlock his cellphone and export the list of the group members, who number in the tens of thousands. The administrator has since been released on bail.

June 4 marked the 30th anniversary of the 1989 massacre of student protesters at Beijing’s Tiananmen Square by the Chinese military. The massacre, which resulted in a still-untold number of deaths of peaceful protesters (evidence-based estimates range between 2,700 and 10,454), has never been publicly acknowledged by the Chinese government.

Terms and images associated with the event have long been closely monitored online — research by the University of Hong Kong and the University of Toronto’s Citizen Lab indicates that it is the most censored topic on the Chinese internet.

While plenty of online content linked to the event was censored by Chinese websites and services this year, US-based Twitter also suspended hundreds of accounts critical of the Chinese Communist Party, according to Hong Kong Free Press. Twitter later apologized and reinstated the accounts, saying that they were mistakenly blocked as part of the company’s effort to remove accounts that are promoting spam or engaging in “inauthentic” behavior.

Kazakhstan held snap presidential elections on June 9, a date also marred with a widespread internet shutdown, which was confirmed by technical tests and reported by pro-government news agency Tengri news.

The elections follow the historic resignation of Nursultan Nazarbayev, who maintained an undisputed rule of the autocratic Central Asian state from the 1989 fall of the Soviet Union until March 2019, when he announced his resignation. In accordance with the Kazakhstani constitution, Senate speaker Kassym-Jomart Tokayev, a Nazarbayev loyalist, officially took power on March 20 and was then elected president on June 9.

In rarely seen street demonstrations, activists and citizens have been demanding free elections and pointing to evidence of rigged voting. At least 500 people have been detained, including journalists, and mobile internet is still blocked in the center of Almaty, the country’s former capital.

Ivan Golunov, a leading investigative journalist, was detained on June 6 in Moscow on what appear to be trumped-up charges of drug dealing and possession. A judge initially released Golunov to house arrest, and then dismissed charges against him, following widespread public condemnation of the case.

Golunov works for Meduza, one of the few remaining independent Russian-language online media platforms. He has led and published several investigations pointing at cases of corruption involving high-ranking officials. In an opinion piece for The Guardian, Golunov’s editor, Alexey Kovalev, also an editor at Global Voices, described the systemic nature of media repression in Russia:

“I’m sure Putin would have stopped it if he could, but you can’t arbitrarily free one victim of this system without admitting that many top-ranking officials were involved in a plan to frame an innocent man for his pursuit of truth.”

Iran’s judiciary branch announced its plan to launch a mobile phone app that will enable Iranians to report violations of “crimes against morality and public chastity” that could cover things like women removing their headscarves or anyone posting “immoral” messages on social media. Speaking with The Independent, Iran technology expert Mahsa Alimardani, who is also a Global Voices contributor, said the app “signals a fear that the Islamic Republic of Iran’s ‘morality’ norms have indeed failed to entrench themselves in society.” She also noted that the app would likely violate constitutional privacy protections.