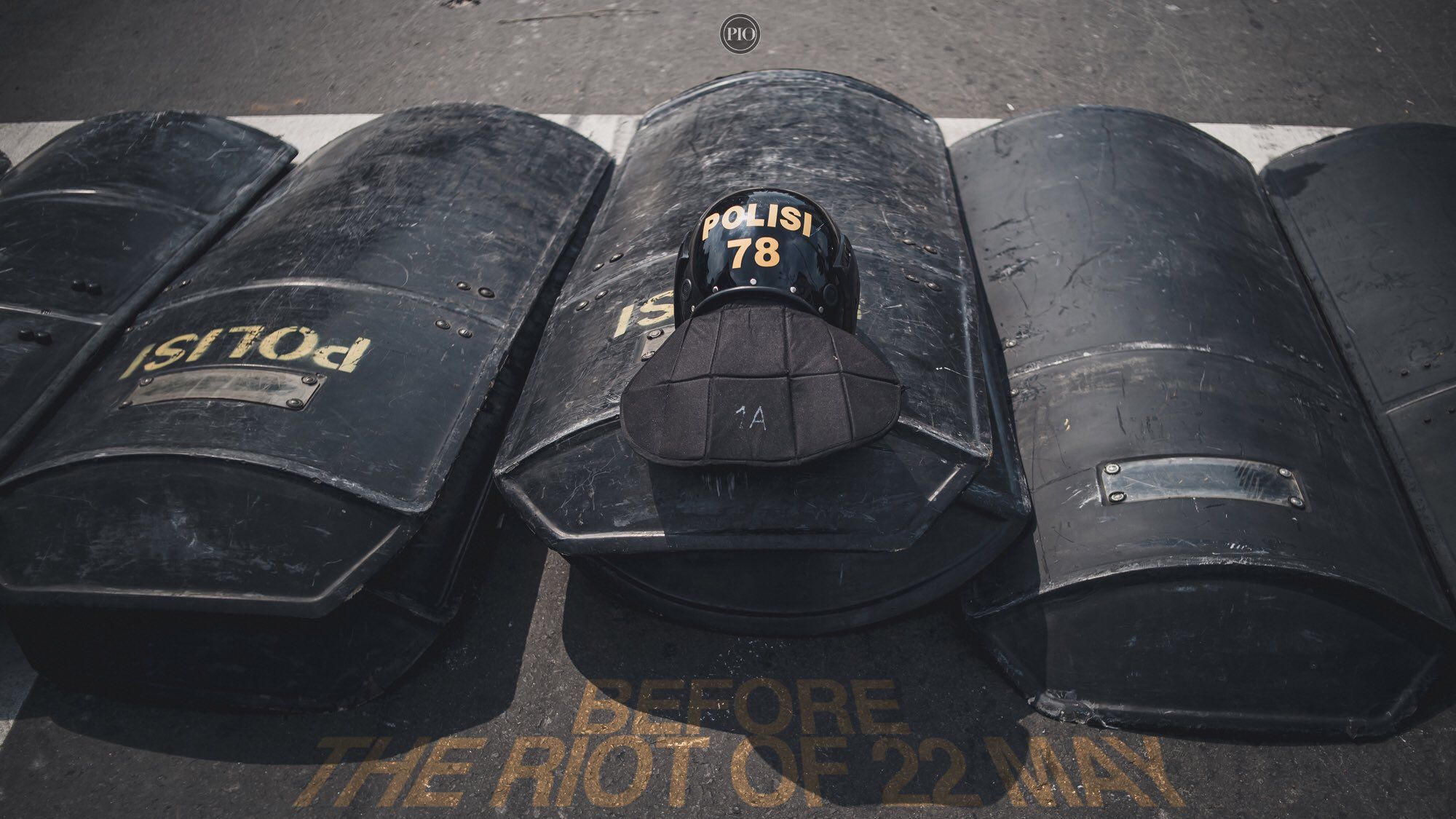 Riot police shields before the start of the election protest. Photo by Pio Kharisma Yongha. Used with permission.

Riots erupted in Jakarta on 22 May 2019 after the country’s election body announced the victory of incumbent President Joko Widodo. The protesters were supporters of defeated presidential candidate Prabowo Subianto who claimed that there was systematic election rigging.

At least eight died during the scuffle with the police and more than 700 were injured.

Aside from these casualties involving protesters, several journalists were also attacked while covering the riots. The government also restricted access to social media for three days to stop the spread of disinformation.

The Coordinating Minister for Political, Legal and Security of Indonesia (Menpolhukam), retired General Wiranto announced on 22 May that social media and mobile messenger apps would be restricted via bandwidth throttling and selective shutdowns of social media accounts to curb the spread of hoaxes. For three days, Indonesian netizens were only able to send videos or images through Virtual Private Networks.

A coalition of human rights groups noted that both supporters of Subianto and Jokowi engaged in online taunting as well as spreading hate speech and misinformation.

Concurring with General Wiranto, the Indonesian Ministry of Communication and Information Technology (Kemenkominfo) asked netizens not to spread unverified content and fake news about the election protest. It shut down some 2,000 social media accounts and websites for spreading ‘negative content.’

Limiting access is the last resort to take in an increasingly dire situation. Other nations have proven its efficiency to stop the spread of chaos.

The minister said the agency reached out to messaging platforms like WhatsApp:

Another way is through a collaboration with platform provider. For example, I've spoken with the chiefs of WA which has closed down 61,000 accounts for conduct violations ahead of the May 22 riot.

But the country's human rights commission said that the government action was an exaggeration.

In its statement, Southeast Asia Freedom of Expression Network (SAFEnet) asserted that the Indonesian government “should not implement throttling without well-defined parameters of national emergency”.

While we understand the government’s intention to stop the distribution of false information and protect the public during violent protests, the decision has also inadvertently restricted public’s access to factual information.

Instead of resorting to social media throttling, AJI has a proposal:

We ask the government to engage with social media providers so they can be actively involved in stopping the spread of false information and hate speeches through transparent mechanism with a stronger legal basis.

The worst attack against journalists since the Suharto-era

AJI reported that an AP correspondent experienced online doxxing while dozens of journalists were physically harassed by protesters and the police. Some blamed Subianto for inciting hate when he called the media the ‘destroyer of democracy’ during his May Day speech. AJI condemned the violence against journalists and has called for a thorough investigation in what many have already described as the worst attack against journalists in the post-Suharto era. Suharto was a strongman who ruled the country for three decades before his fall from power in 1998.

AJI described the intimidation targeting journalists as a blatant act of censorship. Police were accused of using unnecessary force to stop journalists from recording the clashes between state forces and protesters. But there was also violence coming from the side of protesters:

Various rights groups are calling the government to probe the attacks against the media by the police and some supporters of Subianto.