In Hong Kong, authorities arrest the administrator of a Telegram protest group—and force him to hand over a list of its members 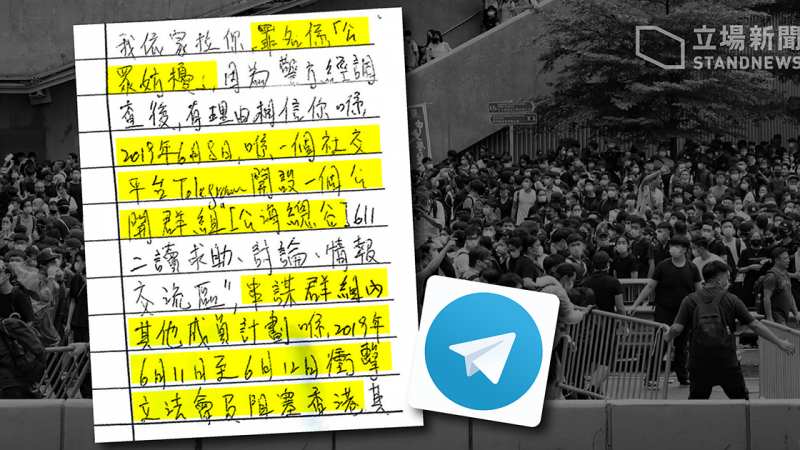 The police record of Ivan Ip’s interrogation in the police station, which says: “You are arrested under the charge of ‘conspiring to commit a public nuisance’. Following an investigation, the police believe that you have set up a public group called ‘International waters: help, discussion, intelligence on June 11 second reading’ and conspire to stage a break-in at the Legislative Council as well as blocking of major roads from June 11 to June 12.” Image by The Stand News, used with permission.

This story was originally published in Chinese by the Stand News on June 12, 2019. It was translated to English by Global Voices’ Chinese Lingua team and published under a content-sharing agreement.

On June 11, authorities arrested an administrator of a Telegram group called “International Waters” (公海總谷) and charged him with “conspiring to commit a public nuisance,” the police has confirmed to The Stand News.

The administrator is Ivan Ip, a 22-year-old student who has agreed to speak with The Stand News over the telephone. He said that while he was in custody police forced him to unlock his cellphone and export the list of the group's members — which numbers between 20,000 and 30,000 people.

Mr. Ip was released on bail the following day and is scheduled to report back to the police in early September.

“International Waters: assistance, discussion, intelligence on 611 second reading” was one of the many secure group chats Hong Kongers have used to organize protests against a bill that could potentially make it easier for mainland China to arrest and extradite critics, dissidents, and even journalists from Hong Kong.

The “Fugitive Offenders and Mutual Legal Assistance in Criminal Matters Legislation (Amendment) Bill” was scheduled to be presented at the Legislative Council on June 9, but that has since been deferred until further notice following the mass rallies.

Mr. Ip said that police showed up at his apartment around 8 P.M. on June 11 with a search warrant. He was later taken to the Sheung Shui Police Division, where officials demanded him to hand over the group's member list. He says he was also questioned about the identities of the group's founders and of the other administrators, as well as about protest plans.

Mr. Ip has confirmed that the whole list of the group's members, as well as all the messages exchanged in the secure chat, have been exposed to the police. After his arrest, the administrators of “International Waters” have decided to shut down the group out of security concerns.

The 22-year-old student has told The Stand News that he hasn't attended any of the recent protests and that he was shocked that the police would arrest him for merely sharing information.

Mr. Ip said that all he did was merely summarize and forward information to the group, such as the list of school strikes and of people who have been arrested, and that this is all public information available to anyone on the internet.

The Stand News obtained a copy of Mr. Ip’s oral statement to the police. This document shows that following an investigation by Hong Kong’s Cyber Security and Technology Crime Bureau (CSTCB), authorities believe that Mr. Ip conspired with other group members to break into Hong Kong’s Legislative Council and block major roads surrounding government headquarters on June 11 and 12.

The Stand News has asked the police to comment on the case, but they have not yet responded.