The Ivan Golunov phenomenon: a brief moment of solidarity and euphoria in Putin’s Russia 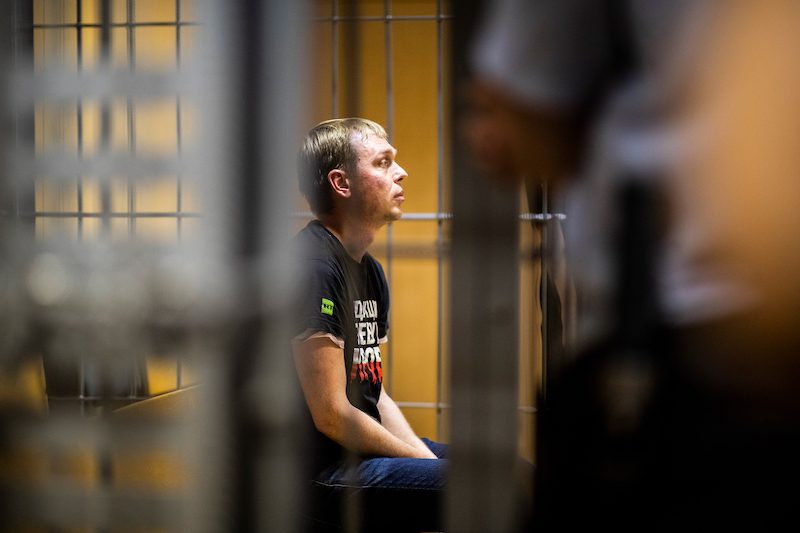 Ivan Golunov, an investigative reporter for Meduza, was arrested on June 6 and released on June 11 without charges after a public outcry // Evgeny Feldman for Meduza, under CC BY 4.0

Shocked by the arrest of leading investigative journalist Ivan Golunov on June 6, Russian civil society and independent media reacted quickly by launching coordinated campaigns as well as individual acts of solidarity that are unprecedented in the 20 years that Vladimir Putin has dominated Russian politics. Such large-scale demonstration of outrage, combined with concern in the Kremlin about Putin’s low ratings have led to Golunov being freed on June 11. More public actions are planned this week in Moscow to seek punishment for those involved in Golunov’s arrest, and to prevent further cases of trumped-up charges against critics of the Russian government.

One of the earliest and longest shows of public support was an improvised ‘selfie studio’ on Petrovka street 38 in central Moscow, in front of the headquarters of the Moscow city police. For several days between June 7 and 11, people waited for hours to have their picture taken in that spot as a sign of solidarity with Golunov.

This twitter user present on June 7 says in this short video she counted more than 110 persons waiting in the queue for their selfie to be taken at Petrovka 38. She uses the term ‘one-person demonstrations’ which is the only form of public demonstration that does not require a permission from local authorities in Russia.

I counted exactly 100 people in the queue for the ‘one-person demonstration’, while I was filming this video on #Petrovka38. When I finished, there were about 110 people, People are protesting against the suspicious arrest of journalist #IvanGolunov.

Similar selfies were taken across Russia and posted online as a sign of solidarity. More traditional methods, such as online petitions also gathered over 180,000 signatures as in a petition posted on www.change.org.

Yet the campaign took unexpected and humorous turns, as in the case of a restaurant in the city of Yekaterinburg in Central Russia that offered free beer to any client sporting a T-shirt with the now iconic message “I and we are Ivan Golunov”.

The Ogoniok restaurant in Yekaterinburg promised a free beer to anyone coming in a T-shirt with the sign I and we are Ivan Golunov”.

Such solidarity was also echoed by media and some celebrities. On June 6, three leading and more independent newspapers, Vedomosti, RBC and Kommersant, agreed to come out with the same iconic message in the exact same layout, again an unprecedented case of media solidarity in Putin's Russia. Copies were sold out in a few hours and are now on sale online as memorabilia. 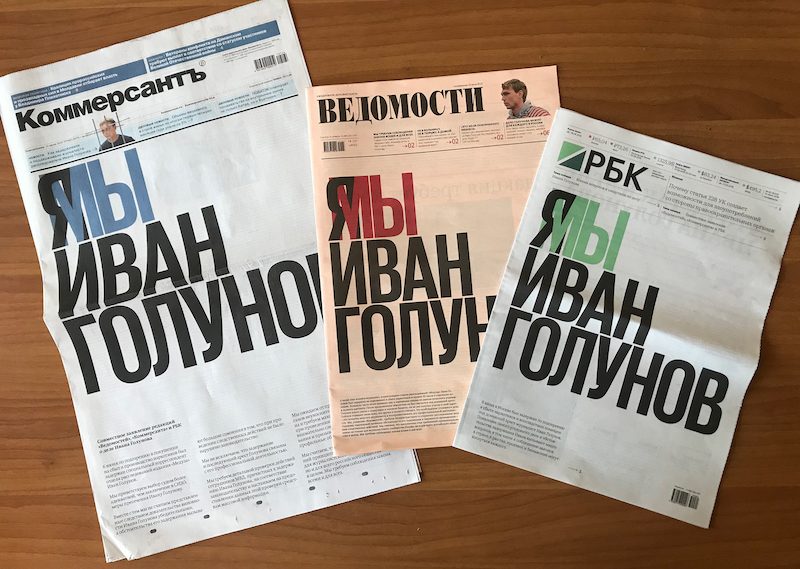 On June 9, Kommersant, Vedomosti and RBC, three leading Russian business newspaper, came out with near-identical cover pages in support of Ivan Golunov, the arrested journalist // Evgeny Feldman for Meduza, under CC BY 4.0

Popular singer Andrey Makarevich of the legendary rock band Mashina Vremeni took part in a video campaign (here at 03.21) , along with other celebrities all calling for Golunov's release and a fair investigation. As a result, his concert planned for June 12, marking Russia Day, was suddenly cancelled last minute.

Following Golunov's release, many are calling for more action to punish law enforcement forces that fabricated the case, but also to talk about other similar cases that have not received such coverage and attention and to prevent this from happening to other civic activists and independent journalists.