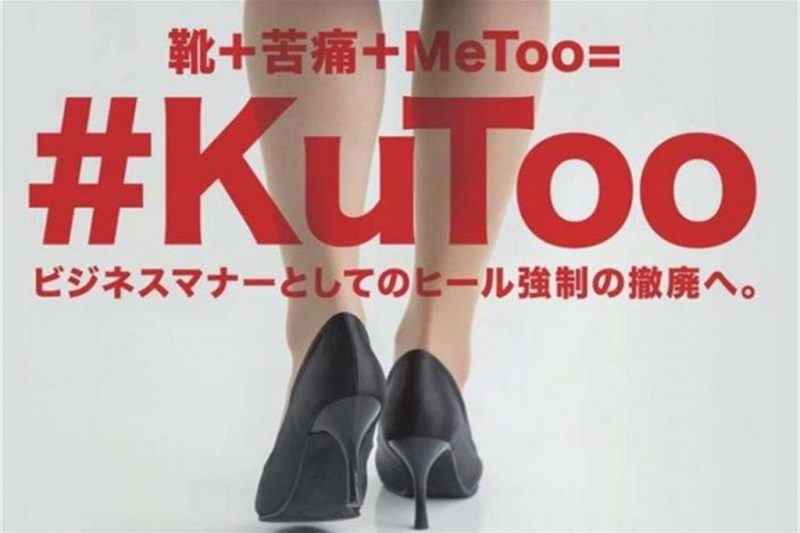 A complaint on Twitter by a Japanese writer has snowballed into a globally-recognized hashtag, an online petition and, most recently, a parliamentary debate in Japan, all while shining a light on gender discrimination women must endure in the workplace.

One day in late 2018 while working at a part-time job as an usher at a funeral home, Ishikawa Yumi, a former model and actress who is now a freelance writer, noticed that her male colleague was wearing comfortable flat shoes. As Ishikawa explains in the online petition she would go on to launch, wearing those shoes would make her job a lot easier.

However, like any other company in Japan, Ishikawa's employer was legally entitled to demand she wears uncomfortable high heels or pumps. Women who wear high heels regularly report experiencing significant pain and discomfort, with some even requiring surgery to fix problems caused by inappropriate footwear.

In January, 2019, Ishikawa tweeted how unfair it was that a new hotel job she was applying for required heels as well. Her tweet about the disparity in workplace dress code for men and women was quickly shared tens of thousands of times, sparking an online conversation.

Encouraged by the replies, Ishikawa created the hashtag #KuToo where working women in Japan and then all over the world shared their stories about being forced to wear high heels to work.

No—hear me out. I can’t. When I was 11, I sprained my right ankle so badly I needed rehab for a month. I started compensating with my left leg, and I ended up having +15 sprains on my left ankle (I literally lost count of how many times).

Although Japan's Equal Employment Opportunity Law prohibits discrimination based on sex in employment, regulations do not prevent employers from dictating differences in work attire for men and women.

In a recent survey of women in Japan, more than 60 per cent of respondents reported being compelled to wear high heels or pumps at work or for job hunting.

As to what the hashtag means and where it came from, Ishikawa says:

Someone (on Twitter) who feels the same way as I do, and with a great sense for words came up with the hashtag “#kuToo”, which is a combination of “shoes” (kutsu), “agony” (kutsuu) and “MeToo”.

Following the success of the #KuToo hashtag at the end of January, in February Ishikawa decided to launch a petition on Change.org, asking Japan's Ministry of Labour to prevent employers from forcing female employees from wearing high heels at work.

By late February, the petition had attracted at least ten thousand signatures.

We've broken 10,000! All you need to do is include your email address and your name.

1. It is wrong to have workplace dress codes that differ depending on gender.
2. Why should “business attire” by harmful to one's health?

Another theme of #KuToo discussions and Ishikawa's petition is that requiring women to wear high heels to work constitutes “power harassment,” or workplace bullying.

At the beginning of June, Ishikawa and her supporters presented the petition to Japan's Ministry of Labour, requesting that the country's labour laws be amended to ban employers from forcing footwear on female employees.

Ishikawa's petition was taken up by Otsuji Kanako, an LGBTQ+ rights activist and member of Japan's national House of Representatives for the opposition Constitutional Democratic Party of Japan.

In a Diet committee meeting on June 5 discussing the petition, Otsuji sparred with Labour Minister Nemoto Takumi, in an exchange that made international headlines (the committee discussion has been translated into English).

While the labour minister agreed that high heels were not necessary for every job, he declined to consider banning employers from forcing female employees to wear certain kinds of footwear, stating:

Every job has unique requirements, so I think (permitting employers to require high heels) should be kept within the scope (of labour regulations), if (high heels) are necessary and appropriate to do the work.

While I've experienced some online abuse and it's scary, (the petition) has also gained a lot of supporters. I know that there is a lot of people who understand the issue, and it's great that there is now a forum to discuss it. I would be very happy if we could all work together.