Will Sudan go directly from one Arab winter to another without an intervening Spring? 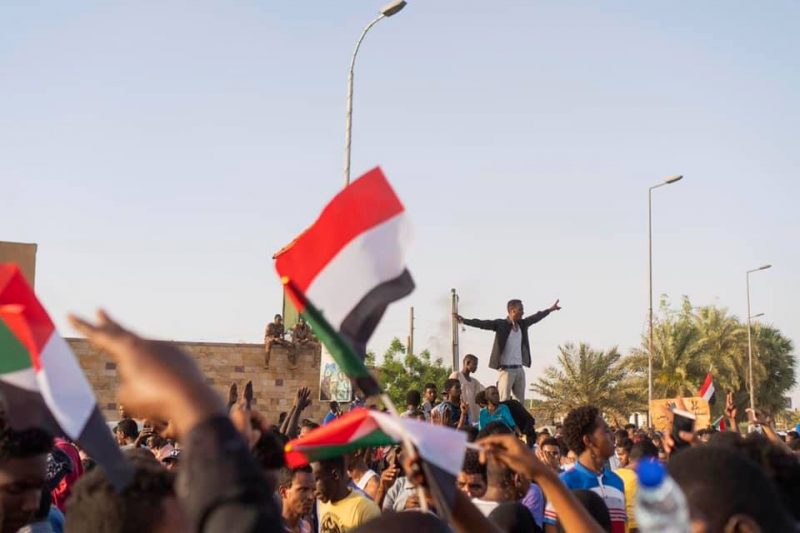 Protestors near the Sudanese army headquarters in Khartoum in April 2019. Photo by M. Saleh (CC BY-SA 4.0)

When protesters forced Omar al-Bashir out of power in Sudan this April after 30 years of dictatorial role, it was an unalloyed good for the world. Bashir has been wanted by The Hague since 2008 for genocide and war crimes in Darfur, and his ouster was a key step towards a free and democratic Sudan, as well as justice for Darfuris.

But what’s followed in Sudan has been far less encouraging. Sudan’s military has promised elections, but not for as much as two years. The Transitional Military Council (TMC), the military leaders now in charge of the country, have included Bashir confidantes like Lt. General Ahmed Awad Ibn Auf, who was suspected of leading Janjawid militia massacres in Darfur. Many Sudan observers believe that Mohamed Hamdan Dagalo, known as Hemedti, is the person really pulling the strings on the TMC, where he serves as vice president. Hemedti not only recruited and led many of the Janjawid fighters who brutally suppressed dissent in Darfur—he has also been accused of having recruited child soldiers from Darfur to fight in Yemen’s bloody civil war on behalf of the Saudis.

Despite the obvious dangers, Sudanese pro-democracy protesters are back out in the streets, demanding immediate transition to a civilian government. Their demands have been met with brutal violence. On June 3, security forces including the Rapid Support Forces (RSF)—whose members are veterans of the Janjawid militias responsible for Darfur’s worst massacres—killed over 100 protesters, dumping bodies into the Nile River, raping and robbing civilians stopped at military checkpoints.

Despite these horrific incidents, Sudanese citizens have continued to fight, launching a mass general strike on Sunday June 9.

The struggle over the internet

As with most conflicts today, there’s an important information component to the struggle between activists and the Sudanese military. The protests that ousted Bashir and have confronted the military have been organized by groups of middle-class Sudanese like the Sudanese Professionals Association and the Central Committee of Sudan Doctors using social media, especially Facebook. Since the June 3 massacre, Sudan’s mobile internet has been largely shut down, making online organizing and reporting on conditions on the ground vastly more difficult. Sudan’s government previously shut down the internet for 68 days to combat the protests that ultimately led to Bashir’s ouster.

Facebook was an especially significant force in bringing women into the streets to protest against Bashir. Tamerra Griffin reported on a set of women-only Facebook groups that were initially used to share gossip, but which were mobilized to identify abusive state security officials, who were then hounded and sometimes chased out of their own neighborhoods. The presence of women in the protest movements and the Zagrounda chant—a women’s ululation—has become a signature of the uprising. Bashir memorably declared that the government could not be changed through WhatsApp or Facebook. His ouster suggests that the power of social networks as tools for mobilization is routinely underestimated by governments.

But now social media seems to be leveraged at least as much by the military as by the opposition. The internet has not been completely shut down—the government has been able to maintain its presence on Facebook, which features at least four pages controlled by the RSF, which are advertising the militia veterans’ version of events. Sudanese activist Mohamed Suliman is organizing a petition campaign, demanding Facebook remove these pages in recognition that they promote violence against peaceful protesters in Sudan.

In addition to combatting Sudanese propaganda on Facebook, Sudanese activists inside the country and in the diaspora are looking for ways to return internet access to the general population, so they can continue organizing protests and document government violence. Activists are organizing information-sharing networks on top of SMS and voice phone calls, but I’m also getting calls from Sudanese friends who wonder whether technologies like Google’s Loon could be used to put a cloud of connectivity over Khartoum. (The answer: maybe. Loon acts as an antenna for existing telecoms networks, and those networks in Sudan have been forced to cut off connectivity. In addition, a balloon floating 20km over a city is a very attractive missile target.)

Until very recently, the few Sudanese who had access via ADSL had been opening their wifi networks or sharing passwords with friends and inviting them to post messages from their houses. A couple of days ago I was seeing reports—unconfirmed—that even ADSL has been turned off. This may signal the start of a new phase of the crackdown.

???
Last available internet route “Sudani ADSL” is now reported to be down.

This completes a dark ring over sudan as internet are now Almost completely disabled, this gives the TMC milita “janjaweed” enough lack of media attention to continue abusing and killing the Sudan. https://t.co/4WDs0YhvAP

On the morning of June 10 Yassir Arman, a major figure in the Sudan Peoples Liberation Movement, which fought a war against Khartoum leading to the independence of South Sudan, was deported from Khartoum to Juba by military helicopter.

I have been deported against my will by a military helicopter from Khartoum to Juba. I was not aware of where they were taking me. I asked them many times. They tied me up in the helicopter together with Comrade Ismail Khamis Jalab and Mubarak Ardol.

One major channel for information from Sudan in the future may be from Sudanese who are in touch with organizers on the ground who have been forced to flee the country and report from neighboring countries.

Countries are known by the company they keep, and the military government’s supporters are well resourced: Saudi Arabia and the United Arab Emirates have provided $3 billion in aid to the military leaders. Given the Trump administration’s tight ties to the Saudi and UAE governments — which have extended to overruling Congress in selling arms to those regimes — it seems unlikely that a petition to the White House to recognize the RSF as a terrorist organization will meet with approval any time soon. (By contrast the African Union — which has a regrettable history of ignoring misbehavior by African military rulers — has suspended Sudan after this weekend’s crackdown.

A few things we can do to help

It’s hard to know what to do as a private citizen when faced with a situation like the one in Sudan. Some thoughts on what might actually be helpful:

–  Pay attention and ask others to do so as well. All governments, including military governments, are limited in what actions they can take by public perception. If Saudi Arabia and the United Arab Emirates understand that people are actually watching what the Sudanese military is doing, it may limit their willingness to support a government run in part by experienced génocidaires. Reporter Yousra Elbagir is reporting from the ground in Khartoum and her Twitter feed is deeply helpful. Declan Walsh, the New York Times bureau chief, is doing excellent reporting from the ground. Reem Abbas, a Sudanese journalist and blogger, is sharing excellent content, much of it in Arabic. Al Jazeera’s synthesis of the conflict has been excellent, but I worry that their reliance on Skype interviews to cover events may limit their coverage going forward:

– In the spirit of getting people interested in what’s going on in Sudan, I recommend Hasan Minhaj’s occasionally silly but good-hearted Patriot Act episode on Sudan’s pro-democracy movement and the military government’s violent reaction.

Sudan’s two telecom operators — MTN and Zain — are international companies which could (in theory) be pressured to violate the military’s demands that they shut down. Zain is a Kuwaiti company, which means they are heavily influenced by Saudi Arabia, but MTN as a South African company might be susceptible to shareholder pressure, lawsuits, etc. The Internet Society has released a statement calling for Sudan to turn the internet back on. It’s unclear whether they would be an organizing point for protests to pressure MTN.

– It can be difficult to get money to the ground in Sudan. While the Trump administration removed some financial sanctions on Sudan in 2017, other sanctions stemming from the Darfur conflict remain in place. My friends in Sudan have pointed me to Bakri Ali and the University of Khartoum Alumni Association USA, a US 501c3 which is using their tax-exempt status to deliver aid to democracy protesters.

It can be hard, in retrospect, to remember the excitement and enthusiasm that accompanied the Egyptian revolution and the broader Arab Spring. But after only a year of a democratically elected Muslim Brotherhood government, a military dictatorship took over. The fear right now is that Sudan could go directly from one dictatorship to another — from one Arab winter to another without an intervening Spring. Some Sudanese protesters have been using the slogan “Victory or Egypt”, looking at the return to dictatorship as the worst possible outcome. The worse outcome is even worse — it’s the prospect of systemic military violence like in Darfur, without intervention by the international community. The same folks are in charge, and we are already looking away.