At least 43 women have come forward with testimonies 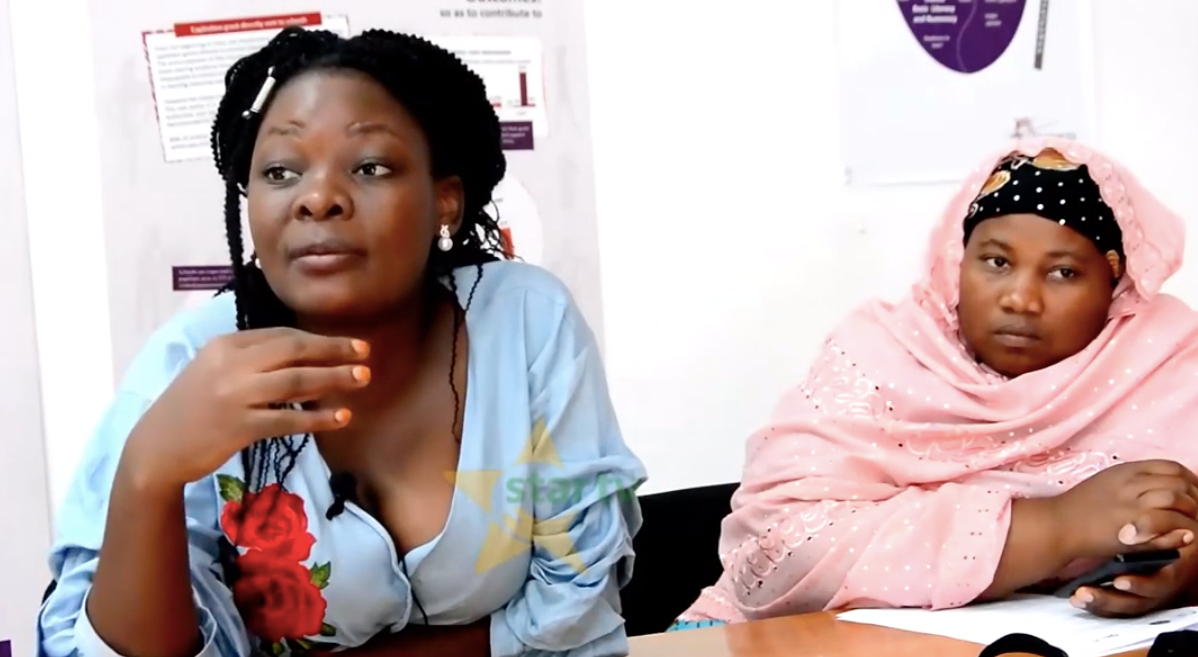 Left: Getrude Dyabere, the Women and Children's Desk officer with the Legal Human Rights Center, speaks on the legal issues regarding “teleza,” armed men who allegedly rape and terrorize women in Kigoma, Tanzania. Right: Ramla Issa, a resident of Kigoma, calls on the government and police for intervention, May 8, 2019, screenshot via StarTV Youtube.

On May 27, 2019, Tanzanian police announced the launch of an operation to investigate and prosecute “teleza” — armed men who have allegedly raped and terrorized women in the Mwanga Kusini Ward of Kigoma in western Tanzania since 2016.

The men reportedly grease their faces and bodies with oil before breaking into female-majority households to rape and rob women throughout the Mwanga Kusini area. Teleza means “slippery” in Swahili and the term has been used to describe these types of attacks.

The District Commissioner of Kigoma, Samson Anga, made the announcement to investigate the allegations following multiple media reports and a May 7 press release by a coalition of civil society organizations including the Legal and Human Rights Center, Tamasha, Twaweza, Jamii Forums, the Centre for Strategic Litigation and Change Tanzania, urging the police to investigate the women's testimonies of rape and torture.

Kigoma District Commissioner, Samson Anga, has launched an operation against rapists known as “Teleza” in Kigoma. He has said that once the culprits are caught they will be whipped and rot in jail.#TokomezaTelezaKigoma #teleza pic.twitter.com/pNG1KgPjUS

I have spoken via WhatsApp with Annagrace Rwehumbiza, program coordinator with the youth-focused civil society organization (CSO) Tamasha, about teleza occurrences in Kigoma.

In early March 2019, Tamasha staff members were in Kigoma to conduct fieldwork on participatory community engagement focused on women, youth and girls. During her interactions with Kigoma community members, Rwehumbiza says, several women mentioned their concerns about teleza.

Rwehumbiza says she went to the Kigoma-Ujiji municipal office to inquire. She says one official acknowledged that they were aware of at least 20 women who had experienced violent break-ins, but no formal charges had been made.

Rwehumbiza says the official asked her to bring the women forward to discuss the allegations, but only two were willing to show up, who said that teleza started to terrorize the community in 2016. That's when she decided to go house-to-house to inquire about teleza.

I just wanted to hear from [the women], what kind of counseling were they receiving? The way the stories were being told, the way we were seeing the pictures, it's like those women were being tormented, and we wanted to know what kind of services did they get in terms of … security, counseling, and things like this.

Over a three-day period in March, Rwehumbiza and her colleagues interviewed at least 43 girls and women who shared similar testimonies about teleza. Rwehumbiza recorded video testimonies and photographed survivors’ wounds allegedly suffered during teleza attacks. She shared the stories with her colleagues and strategized with other CSOs throughout April to call attention to the issue, eventually releasing the press statement as a coalition on May 7.

It snowballed. The more you go to one house, they'll show you another one, another person, another house. … So we went from house to house to hear these women's stories and we got close to 45. These are their stories. … Each described what happened to them. … One says she was broken into more than five times. … Some were raped in front of their children…

Rwehumbiza says it's unclear how many men are involved in these attacks and to what extent they operate as an organized crime network. On Twitter, she insisted an urgent investigation is necessary to find out more.

#Teleza What we are asking from the government is a comprehensive investigation to identify the extent of this issue so that deliberate and quick action can be taken and to help these women.

Jamii Forums, a popular online discussion forum in Tanzania, agreed to post and circulate the women's testimonies in the forum as well as a series of tweets to raise awareness. All of the witnesses and survivors shared their testimonies anonymously, fearing reprisal.

One witness describes how a man referred to as teleza entered her home while she and her siblings were sleeping:

TESTIMONY OF A YOUNG WOMAN IN FORM 3: When I was in Form 2, #Teleza came to our home in the night and [saw] my young male sibling sleeping in the living room. He took off his clothes to rape him but when he discovered he was male, he left him and entered the rooms where us girls were sleeping.

“These women need us,” Rwehumbiza said. “Their stories have not gotten the communal outcry they deserve.”

We continue to amplify voices concerning this question of #Teleza for the government to hear these voices and to see that this question needs swift and intentional steps taken.

What took so long?

Rwehumbiza says that the legal process is a major challenge in effectively reporting teleza cases. According to a witness, one survivor recognized her perpetrator in the community but police failed to hold him in jail after his initial arrest:

Witness 1: There's a young woman who was broken into by #teleza three days in a row. She knew the young man and pressed charges with the police but this young man has not been arrested up to now.

This exact person was recognized in another area and charged and the police arrested him but after one day, he was released.

Rwehumbiza says women who did go to the police to report these cases were belittled and disbelieved.

The CSO coalition's press release reiterates that survivors were the targets of disapproval and humiliation by male law enforcement officers and the community-at-large stigmatized and ridiculed them — when survivors sought help, they were met with victim-blaming. One survivor said that when she sought care, the doctor blamed her and said it was her fault for playing “hard to get,” according to a tweet from Jamii Forums.

On May 20, Member of Parliament Zitto Kabwe, who represents the Kigoma-Ujiji municipality, tweeted his concern about teleza:

Extremely sad that women continue to suffer from rape and physical violence called #Teleza in my constituency @KigomaUjijiMC. Police @tanpol have been informed but they do nothing to end this madness regardless of public outcry from CSOs. Tonight another woman badly injured

The next day, he brought the issue before parliament, referring to the public outcry and need for police accountability. In response, the Minister of Home Affairs, Kangi Lugola, said that Kigoma police records do not reflect any reports related to teleza incidents and that the issue is not as severe as MP Kabwe claims:

The #Teleza and #TokomezaTelezaKigoma (#ObliterateTelezaKigoma) hashtags have made the rounds on Twitter. Netizens from East Africa are calling for action against the violence inflicted upon the women in Mwanga Kusini.

Tanzanian lawyer and activist Anna Henga wrote that Kigoma's image has been tarnished by teleza and the lack of urgency in response:

Kigoma is beautiful, the only thing tarnishing her good image is trending incidents of violence against women known as #Teleza.
I call upon people of Kigoma and all Tanzanias to respect and protect rights of women. #Teleza #Kigoma #Tanzania pic.twitter.com/O4Z6gC74Iy

Rebecca Gyumi called on netizens to “re-politicize” violence against girls and women:

We need to re-politicize violence happening to women and girls. While the current approaches have made progress, it still within an ever-shifting context of impunity #Teleza #VAWG