Could the PetroCaribe scandal be the end of Haitian President Jovenel Moïse?

A new report reveals a Pandora's box of corruption 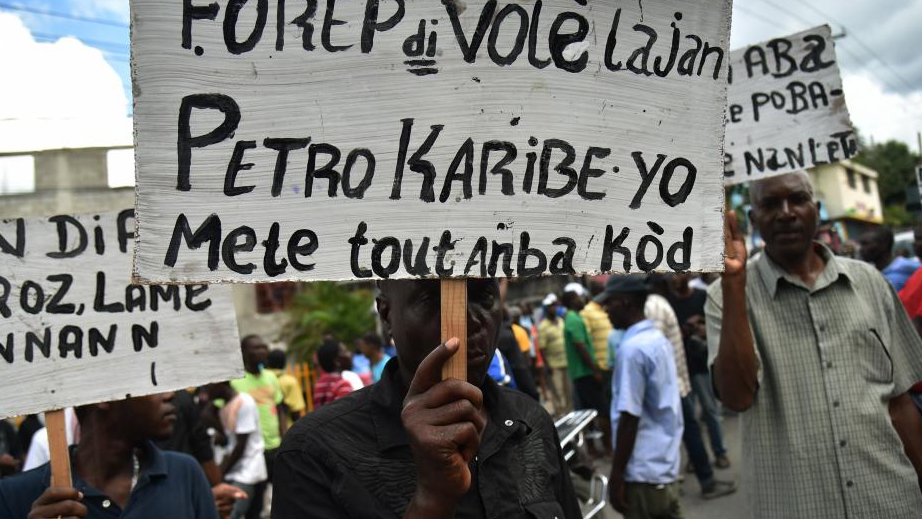 On May 31, 2019, Haiti's High Court of Auditors released a 600 plus-page report as a deeper audit regarding the mismanagement of the PetroCaribe funds. The corruption scandal surrounding PetroCaribe, a regional energy programme orchestrated by Venezuela and intended to provide petroleum products to Haiti under preferential terms, was at the heart of violent protests that threatened to cause President Jovenel Moïse's downfall this past February.

The Haitian president is linked to the $3.4 billion PetroCaribe scheme via his own company, Agritrans, and now another — Betexs — which have benefited from the opaque contracts that characterise the scandal.

In releasing the report, Haiti's Court of Audit has opened a Pandora's box that is bringing to light the high level of corruption and dilapidation that President Moïse and his Tèt Kale party have been accused of:

The final @ComptesCour report on #Petrocaribe does not give @moisejovenel a free pass. The president's firm Agritrans is mentioned 69 times in the report's 612 pages. And the findings don't look good for the Banana Man. Full report: https://t.co/Fkf9wgTfAC

The Moïse administration may be taking the heat, but in fact, prior successive governments have been involved in managing the PetroCaribe funds. 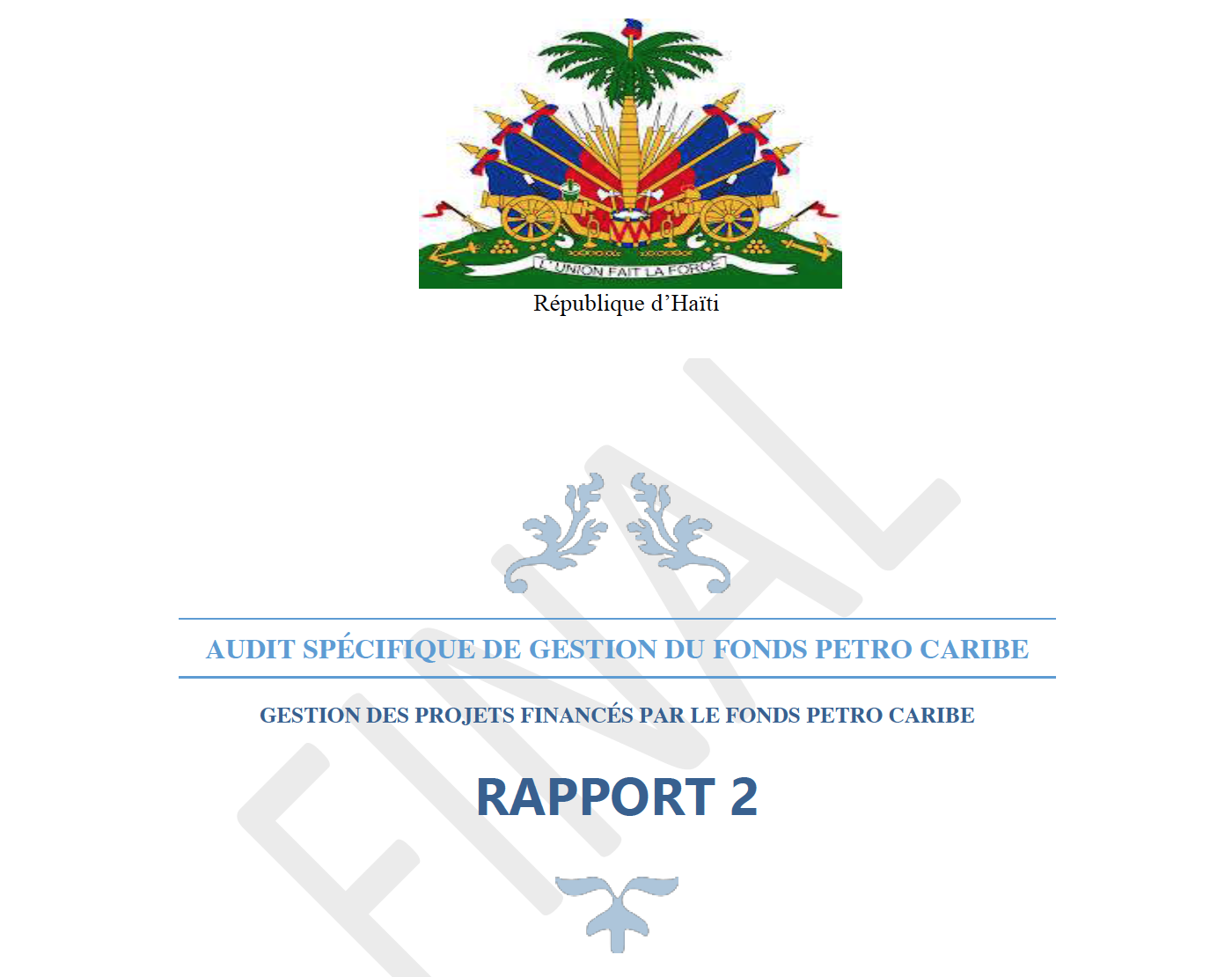 A screenshot of the title page of the final audit by Haiti's High Court of Auditors regarding mismanagement of the country's revenue from PetroCaribe.

The PetroCaribe programme started in 2006 under President René Préval, who first signed the agreement. Control reverted to the Tèt Kale party when President Joseph Michel Martelly took over in 2010, then the baton was passed to Jocelerme Privert, who acted as interim president between February 2016 and February 2017. Privert, a seasoned bureaucrat, has emerged in politics, just like Preval, through the channels of Fanmi Lavalas, a once-dominant political party and movement. Although allegations of embezzlement of PetroCaribe dollars have also been directed toward them, the public perception is that the Tèt Kale regime has taken the siphoning of PetroCaribe money to astronomical heights.

The inflated cost for painting the Rex Theatre, for example, a famous old movie theatre in Port-au-Prince, is telling in that regard:

I naively thought that Youri Chevry [the mayor of Port-au-Prince] was the one who painted the front of the Rex to mask its ugliness, ? but it's  the Tèt Kale Party that stole 5 million US dollars, ? that poor thing they do for 5 million ? how can one explain such a scam and @GarryGPPC is defending their misbehaviour ?

My question that hangs in the balance: was it Picasso who painted the Rex for 5 million?

Social programmes such as Ede Pep, branded under Martelly's presidency as government initiatives to alleviate the suffering of the most vulnerable, have instead served private purposes. The report has revealed huge discrepancies between the funds that were supposedly allocated to these programmes and what was disbursed in reality. The number of fictive beneficiaries is staggering, amounting to 20,850 between 2012-2014 for the Ti Manman Cheri programme alone.

Etzer Emile, a local economist, echoed that the country's current poor governance, insecurity and socio-economic troubles relate to the mismanagement of PetroCaribe funds:

We must understand that today if there aren't enough roads, electricity, hospitals, water, food, airport, economic growth and jobs for young people, but we are going through misery, partly it's because there is a group of people who have embezzled Petrocaribe's money. The Cour des Comptes has done their work, now we'll put pressure for justice to be done #kotkodla [#Polishhaitians]

Meanwhile, the ratification of Jean Michel Lapin as Moïse's third prime minister has hit a standstill in the Senate.

Having exceeded his time as interim prime minister, Lapin has been unable to secure the post permanently thanks to a group of four senators (known as G4) from different opposition factions that have blocked him from presenting his statement of general policy. The G4 scolded the government over the presence of several ministers who had been part of the previous administration in Lapin's nominated cabinet.

Chief among these is Jean Roudy Aly, the Minister of Justice whom the group blames for negotiating the departure of Haiti's foreign mercenaries in February 2019. The G4 obstructed both attempts, on May 14 and 30, 2019, to ratify Prime Minister Lapin.

As a response to the G4, 72 deputies affiliated with the president from the majority bloc in parliament were planning to resign in order to invalidate the parliament. They presented this initiative as a way to resolve the crisis, but it was received very negatively in the court of public opinion. Some of the deputies later tried to dismiss the fact that they ever had such plans.

Haiti-Crisis: 72 MPs threaten to resign, Gary Bodeau [President of the Chamber of Deputes] is waiting for the letter

PetroCaribe activism, known as the #PetroChallengers, has dipped recently due to other protests taking centre stage: the November 2018 La Saline massacre and the collective rape of young female students. As more information suggests that elected officials close to the president have connections with armed gangs, some citizens wonder if the government is staging such insecurities to intimidate and instill fear so that people will stop asking for accountability:

Will we just stand by and watch them massacre our fellow Haitians???

The report has fueled a greater discontent rooted in the country's socio-economic crisis. The government's poor handling of the situation, all while insecurity and gang activity increase, is also re-igniting social mobilisation around the PetroCaribe issue, intensifying calls for those who embezzled money to be brought to justice:

We must never demobilise until all the culprits of stealing money from the population go to prison for crimes against the country, and for the sake of prosecution, assets handed over to the relevant institutions for the useful development of citizens.
#wearen'tsleeping #PetroCaribetrial

A PetroChallengers anti-corruption protest is scheduled for Sunday, June 9.

The report focuses on the Tèt Kale party as the one that stole the most from PetroCaribe. It even revealed that rose bracelets which partisans and government officials used to wear to show allegiance to the party were produced with PetroCaribe money. The cost of one bracelet? $90:

In the beginning were the bracelets… Now come the handcuffs

Tèt Kale supporters are already making efforts to discredit the report as being biased and untruthful, but intense social mobilisation around PetroCaribe and other related instances of poor governance may well force Moïse's government to deal with the issue.

If the government refuses, many Haitians wonder whether this movement has the potential to cause its downfall.