Tiananmen commemorations: an inconvenient truth for Beijing, a dire warning for Hong Kong and Taiwan 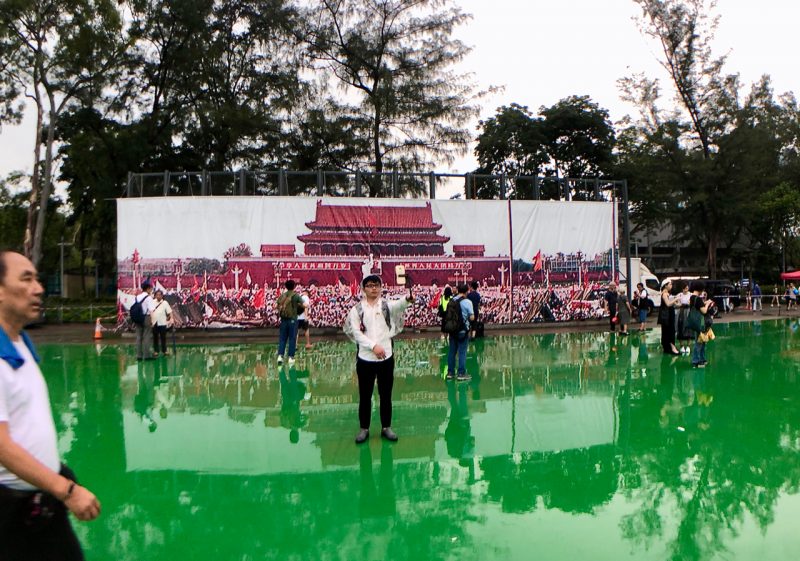 A young man takes a selfie in front of a billboard depicting the events of June 1989 before the start of the 30th-anniversary rally in Hong Kong. Photo by Georgia Popplewell (CC BY SA).

Some images seem to engrave themselves in the collective memory: the film footage of a man armed solely with his courage and two shopping bags stopping a column of tanks on Tiananmen Square in Beijing in June 1989 is one of those.

But today this memory endures only outside of China, as Beijing has spared no effort in eradicating any mention of the pro-democracy movement of students and workers protesting that ended in bloodshed on the night of June 3rd to June 4th, 1989. Any allusion to those events, either direct or indirect, offline or online, is severely punished, resulting in interrogations, arrests, deletion of online content, and freezing of social media accounts.

Outside of mainland China, however, and particularly in Hong Kong and neighbouring Taiwan, the memory of those events remains alive. And this year's commemorations marking the 30th anniversary of Liu Si—or “6.4” as it is commonly referred to in Chinese—comes at a time of heightened political sensitivity in these two Chinese societies where citizens still enjoy partial or full democracy.

In Hong Kong, which, since the 1997 handover, falls under the People’s Republic of China’s (PRC) jurisdiction and the One Country, Two Systems principle, the local government is discussing a bill on extradition to the mainland that would further erode the safety of activists or politicians critical of Beijing’s policies. In Taiwan, there is growing concern about the island's economic dependency on the mainland on the eve of key presidential elections in 2020. Polls show that the opposition Kuomintang party,which is considered more favorable to increased economic and possibly political ties with Beijingis, is gaining ground against the current president, Tsai Ing-wen of the Democratic Progressive Party (DPP).

This may explain why both Hong Kong and Taipei registered record attendance at their annual commemorations of June 4th.  while other cities around the world also marked the event.

Hong Kong: “The truth that you guarded. . . for thirty years, been transformed into our persistence” 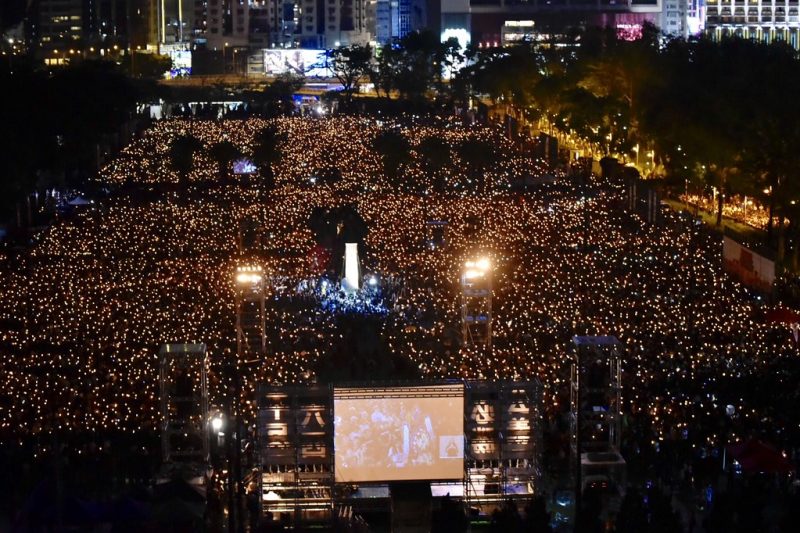 As Oiwan Lam notes on Global Voices, “Hong Kong has been the most significant site within the China regime for preserving the memories of June 4.” Media reports put the number of people gathered in Victoria Park yesterday for the annual observance, which has been taking place for 30 years, at anywhere from 100,000-180,00. This included many political parties and activist groups, who also seized the opportunity to promote opposition to the proposed extradition bill. 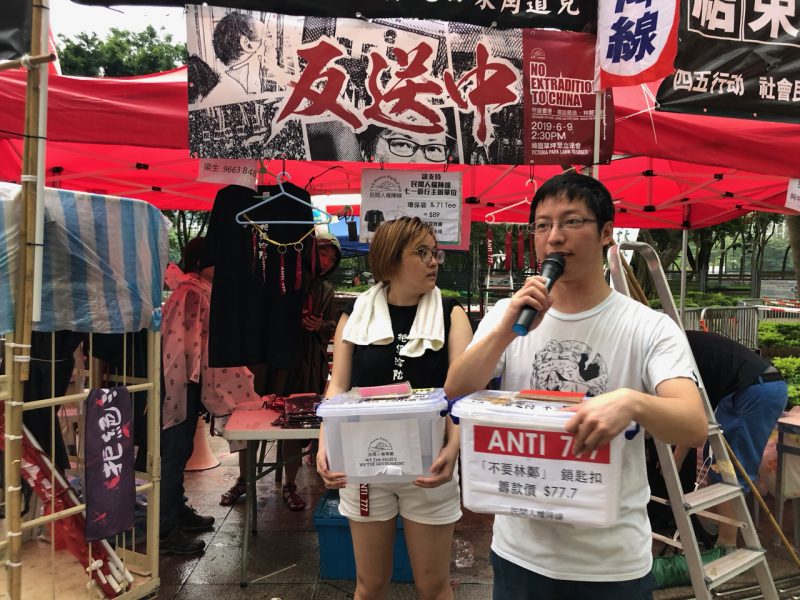 Hong Kong activists seized the opportunity to promote opposition to the proposed extradition bill and the rally against the measure taking place on June 9. Photo by Georgia Popplewell (CC BY SA)

The programme included music by a local rock band, video presentations, speeches and ceremonial torch-lighting, laying of flowers, and burning of books of condolence. As the text provided by the rally organizers, the Hong Kong Alliance in Support of Patriotic Democratic Movement in China, said: “Your resistance has, for thirty years, continued to inspire resistance at home and abroad. The love and peace you showed have, for thirty years, given power to subsequent movements. The truth that you guarded at all costs has, for thirty years, been transformed into our persistence. It is what you see now: the candlelight in Victoria Park that threatens those in power.”

Taipei: art in the service of the duty to remember

The June 4th commemoration took place at Taipei’s Freedom Square in front of the Chiang Kai-shek Memorial Hall, the traditional spot for larger public events named in honor of Taiwan's transition to democracy in the 1990s. A few hundred people gathered around a stage to listen to speakers, including direct witnesses and activists from June 1989, government officials, and Taiwanese pro-democracy activists. Several Hong Kong activists delivered stern warnings to Taiwanese citizens not to trust Beijing's motives, noting that they “speak from experience”, having witnessed a rapid erosion of freedoms in their own territory. A replica of the iconic Goddess of Democracy was prominently displayed on stage. 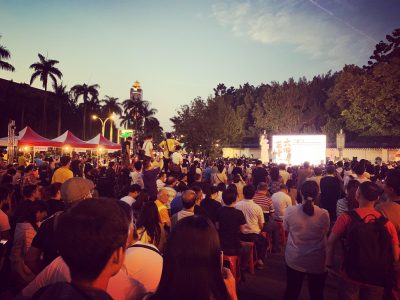 Commemoration of Tiananmen 30th anniversary on Taipei's Freedom Square, with a copy of the Goddess of Democracy on stage. Photo by Filip Noubel, used with permission

Also present were activists supporting Tibetan independence and advocating for international action regarding the mass imprisonment of Uyghurs in Western China, an issue mentioned by almost all of the speakers on stage.

Several documentaries relating the June 4th events, including the fight of the Tiananmen mothers, were screened. Art played a major role in the commemoration. The Tsai Jui-yueh Dance Research Institute performed a dance to honor the Tiananmen Mothers. 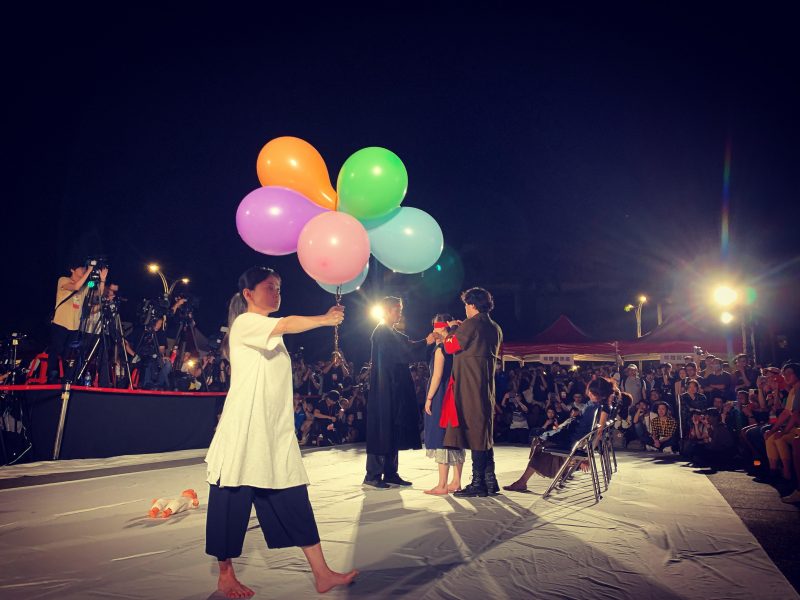 Closer to the Chiang Kai-shek Memorial Hall, an inflatable installation by Taiwanese artist Shake depicting the famous scene of the tank man has stood since mid-May. The artwork is itself inspired by a caricature by artist Badiucao, who decided to reveal his real identity on this 30th anniversary, despite genuine security risks. 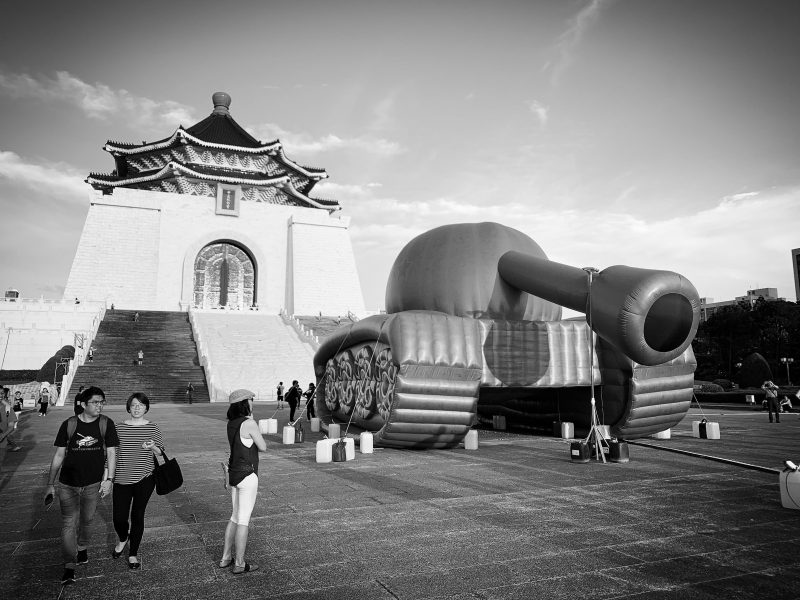 France, which offered asylum to several of the leaders of the pro-democracy movement in 1989, held a commemoration in Paris on Place de la République, a popular spot for demonstrations. A 2-D image of a tank was installed by the French human rights organization ACAT to remind Parisians of the events of June 4th, 1989. 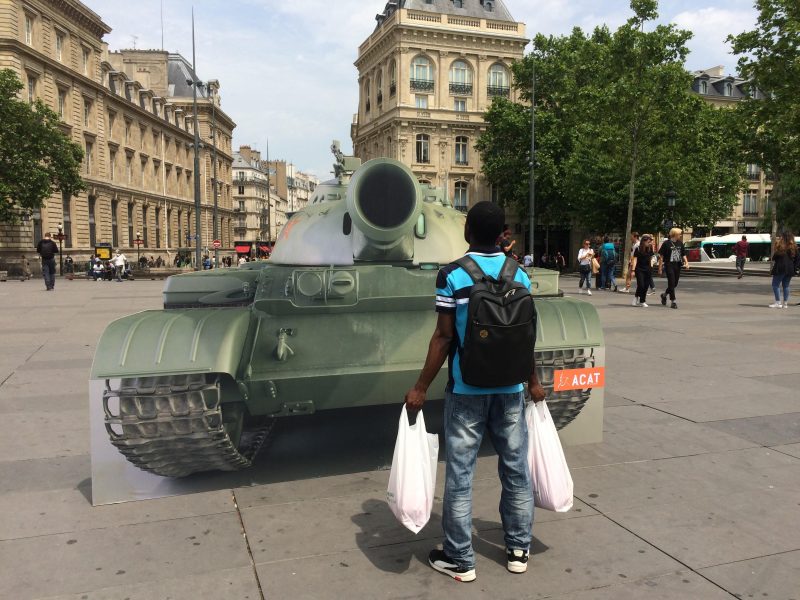 Later in the day, members of Paris’ Chinese community and others held a public commemoration for the victims of the Tiananmen massacre, while repeating calls for transparency and justice. 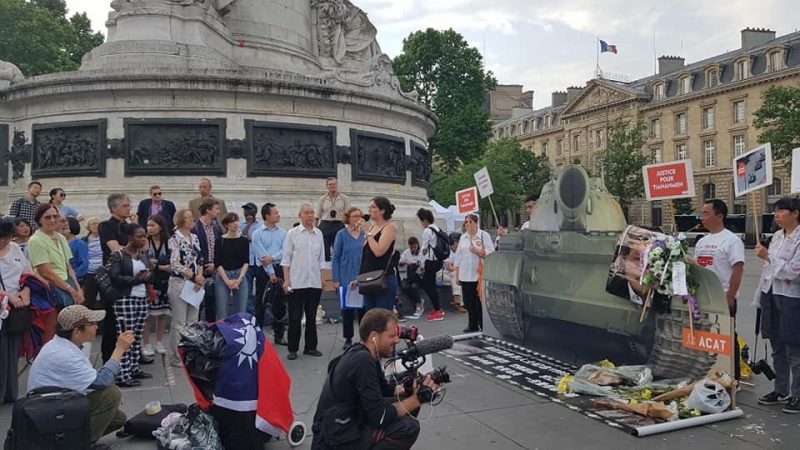 Commemoration and speeches by French, Chinese and Taiwanese activists. Photo by Michel TD, used with permission.

As many witnesses and activists asked: when will Beijing finally acknowledge historical facts? When will it apologize to the families of the victims?