A publisher from North Macedonia that is known for printing Nazi-themed books caused controversy at Skopje Book Fair on May 8, 2019, for publishing a book by the country's former prime minister — and current fugitive from justice — Nikola Gruevski.

The publishing house Gjurgja has printed Macedonian translations of Adolf Hitler’s “Mein Kampf” and “My New Order,” as well as collections of his and Benito Mussolini’s speeches under titles such as “The Jewish Question, Race, and Christianity,” or “Fascist Revolution.”

Those are works that often promote the extermination of groups of people based on their ethnicity, religion, and other characteristics. Hate speech is a crime in North Macedonia as well as in many countries in Europe.

Nikola Gruevski led the right-wing authoritarian government that ruled North Macedonia between 2006 and 2017, a period of sharp democratic decline and erosion of institutions. At that time, state propaganda praising him as an economic genius was widespread. He was re-elected MP in 2016, but resigned as party leader after the VMRO-DPMNE failed to win the majority in parliament.

Gruevski's new book is titled, in translation, “Experiences for the Future – economic effects of the various types of international flows of capital including a particular look at the Republic of Macedonia” and is mainly based on his doctoral thesis.

In June 2018, he received a Ph.D. title in economics by the University of Sts. Cyril and Methodius in Skopje — mere weeks after he had been sentenced to two years in prison for an illicit purchase of a Mercedes worth 600,000 euros when he was prime minister. In November 2018, he fled to Hungary, where he was granted political asylum. 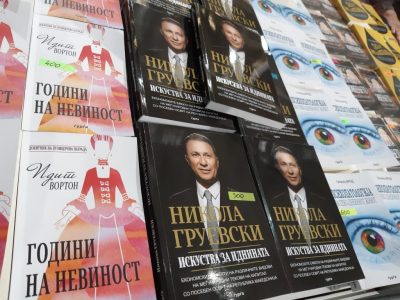 The book “Experiences for the Future…,” by Nikola Gruevski sandwiched between translations of “The Age of Innocence” by Edith Wharton and “The Psychopathology of Everyday Life” by Sigmund Freud at Skopje Book Fair 2019. Photo by Meta.mk News Agency, CC-BY.

Gruevski has repeatedly said he's facing political persecution back home and has fled to save his life — a claim he repeats in his book's foreword.

According to media reports from the Book Fair, the publisher claims that Gruevski's book has become a bestseller and that they plan a second edition soon.

Even while on the run abroad, Gruevski appears to still exert influence over his political party VMRO-DPMNE. He still holds the title of honorary party president and allegedly has been receiving frequent visits by high party officials in his Budapest hideout.

Gruevski now risks losing his seat as government MPs work to invoke a Constitutional provision that says MPs absent for more than six months without reasonable justification could have their mandates relinquished. A plenary vote on the matter is scheduled for June 7.

At Skopje Book Fair, Gruevski's book was displayed back-to-back with the rest of Gjurgja's portfolio, which overwhelmingly consists of self-help guidebooks, memoirs by controversial figures, and conspiracy theories.

Another of their recent releases is a collection of speeches and statements by Vladimir Putin called “Words That Change the World.” Here are some of the books displayed on the same booth: 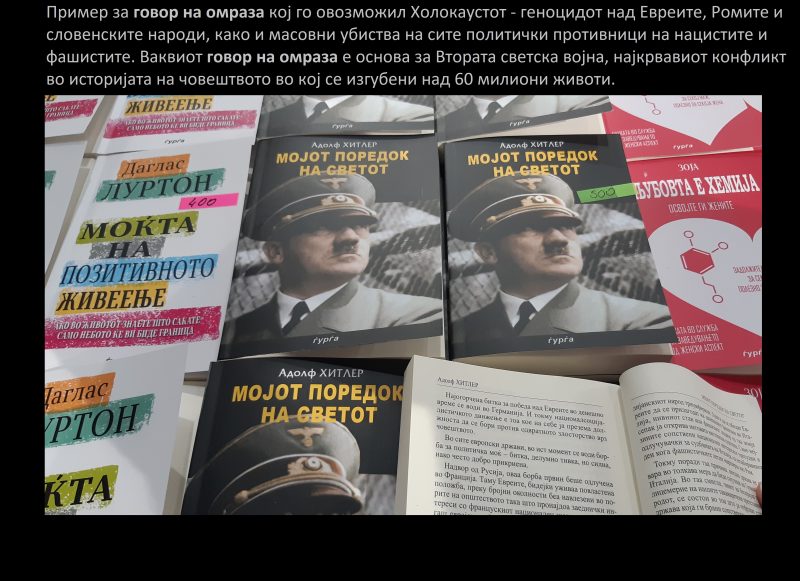 The Macedonian version of Adolf Hitler's book “My New Order,” published by Gjurgja, displayed on a stand at Skopje Book Fair 2019. The photo shows a paragraph calling for war against Jews. The caption in Macedonian above the picture says: “Example of hate speech that enabled the Holocaust — genocide over Jews, Roma and Slavic peoples, and mass murder of all political opponents of Nazis and fascists. Such hate speech was the basis for the Second World War, the bloodiest conflict in the history of humanity, which has led to the loss of over 60 million lives.” Photo and caption by Meta.mk News Agency, CC-BY.

Publishers of fascist literature around the world tend to claim they are exercising their right to free speech, or that they publish these books as mere historical resources for study.

However, the editions from North Macedonia we've cited don’t contain any information about the consequences of the exposed claims besides brief (and sometimes ambiguous) disclaimers. By conveying Nazi propaganda in its original form, without qualifying it as hate speech, and lacking critical analysis and historical context, those publications could be easily seen as endorsements.

Meanwhile, organizers of the Turin book fair, which took place in the Italian town between May 9 and 14, disinvited a self-proclaimed fascist publisher from the event after several writers, including one Holocaust survivor, threatened to boycott it.