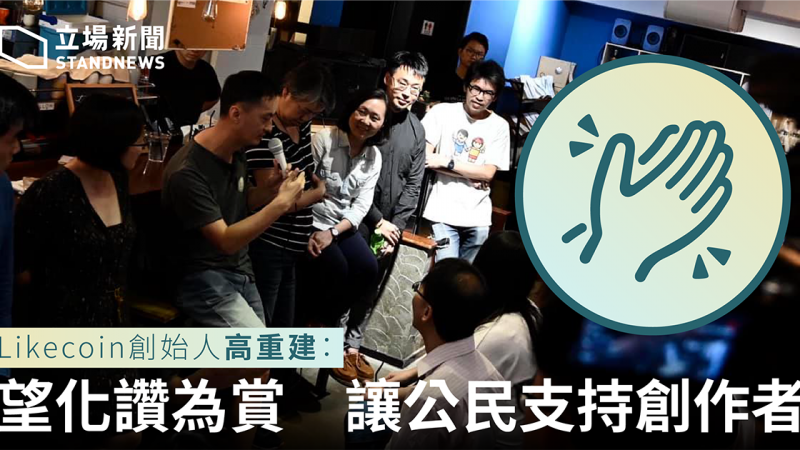 Civic likers campaign launched on May 21, 2019. Image from the Stand News.

As the Internet becomes flooded with more and more information, the issue of media sustainability is a major challenge for the journalism sector. In the case of Hong Kong, the majority of independent online media outlets depend on both citizen donations and advertisements for revenue to support their daily operations. In response to what many see as the unsustainability of this model, four major citizen media outlets in Hong Kong have joined a Civic Liker Campaign to look for alternative income sources.

Under the current business model, citizen media outlets have to spend extra manpower for fundraising and the majority of their writers contribute to the platform without receiving an honorarium. At the same time, in order to attract more advertisements, they also have to boost up visit rates and insert advertisements in their content. Some independent media outlets, such as Initium Media [2], have had to shift to a subscription model in order to generate enough revenue for high-quality content, and more and more bloggers make a living by creating promotional content.

To address the problem, four major citizen media outlets including inmediaHK [3], Matters.news [4], the Stand News [5] and Citizen News [6] have collaborated with LikeCoin Foundation [7] to launch a campaign known as Civic Likers.

The campaign encourages individual citizens to make use of a new cryptocurrency, LikeCoin, to show their appreciation for original online content through donations. As written on LikeCoin's official site [8]:

Civic Likers is a campaign to support original online content. One only has to spend an amount equal to a cup of coffee per month to get registered as a civic liker. After that, you can turn your “likes” into monetary support for online content creators.

The monthly USD$5 you spent would be allocated solely to the authors to support their work. By clicking the LikeCoin button, you can distribute your coins to the works and authors you like. The foundation will not take any administrative or transaction costs. You can login anytime to trace where you have spent the coins.

The foundation launched the campaign on May 21 with a public forum entitled “The future of online media: Alternatives to free content and subscription”.

Kin Ko, the founder of LikeCoin Foundation, took aim at Facebook's like button during the launch (via Citizen News’ report [9]):

Even if you are an opinion leader, you could not get a penny from Facebook. Facebook's like button is just to help the company's AI to attach advertisements to your post. It doesn't generate any revenue for the authors.

On the other hand, he wants the Civic Likers campaign to turn “likes” into rewards for the authors (quote via the Stand News [1]):

The main objective of LikeCoin and the Civic Likers Campaign is to find a business strategy alternative to the free content with advertisement model and subscription model. By turning “likes” into “monetary rewards”, the content can remain open for public access while the authors can get their revenue from “likes”… both advertisement models and subscription models have disadvantages. If the writers have to insert advertisements in their work, they can not be critical. As for the subscription model, if one can't afford to pay the fee, they can not access high quality content. Civic Likers is a campaign to support an ecosystem in which those who can afford to pay for content can support good quality open source content for public consumption.

Raymond Wong, Chief editor of Madman Monologue [10], a Facebook page founded in 2013 that tailor-made social media advertisements for their clients, echoed Ko Kin's view. He confirmed that content circulated online cannot be critical under the advertisement model. Wong cited [9]from his own experience:

I was more outspoken in the past. But after I adopted the advertisement business model, I could only express my views in a Facebook [closed] group. Pages are for making a living… if such model is adopted in news site, it would be an even bigger problem.

Many feel that the free content model has generated a passive consumption culture among the young generation. Donna Chu, associate professor at the School of Journalism and Communication from the Chinese University of Hong Kong, hopes that [9] the Civic Likers campaign can encourage more active online participation:

While the young generation grew up in a social media environment, a majority of them are in passive consumption mode. They don't even like or share the content in order to avoid leaving digital footprints. They are so used to receiving free information to the extent that they would not search for meaningful information. For example, when they visit Youtube, they just watch the trending videos. The Civic Likers campaign can encourage participation with real effects, it is quite empowering. This can be a starting point for more substantial change of the current online culture.

Damon Wong, editor of inmediaHK, hopes that [9] the LikeCoin mechanism can help to tackle the “free labour” and “exploitation” problem:

Authors have complained that writing for online media is like “free labour”. Even if we have a bit of resources to give an honorarium to some of our writers, we don't know how to allocate the resources fairly. The Civic Liker campaign is a potential solution. Let the readers decide and reward the writers directly.

While Wong is hopeful that the Civic Likers campaign can address potential self-censorship problems under the advertisement model, Poon Chekman, the advertising manager in the Stand News, worries that the pool of Civic Likers will not be big enough to support the independent sector:

We frequently get feedback from our individual donors that they have to cancel their donations because they have to give the donations to others. They only have this much of money and they have to help others. Although there are more than a million voters giving their votes to the pro-democracy parties, but those who are willing to give money to media outlets critical of the establishment are only very few and they could not possibility support all of the media outlets. For example, when Citizen News was launching their crowdfunding campaign, some of our donors would leave us. The most important issue is to expand the pool of citizen media supporters.

Currently, about 360 individual bloggers and news sites have installed the LikeCoin button and 130 individuals have joined the Civic Likers campaign. Ko Kin says he is aiming to recruit 10 thousand Civic Likers by the end of 2019.