Trinidad and Tobago registers Venezuelan asylum-seekers to legalise their status

There are registration centres in various parts of the country 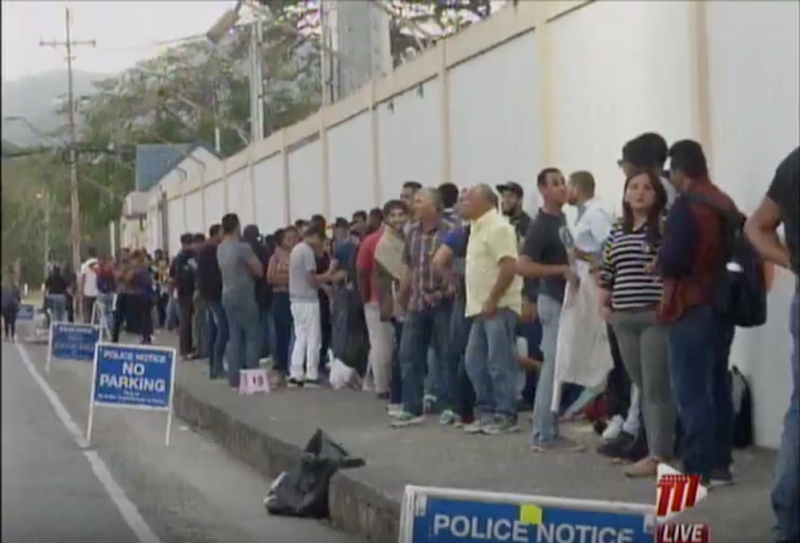 Venezuelan asylum-seekers line up outside the Queen's Park Oval in Port of Spain on the first day of the government's registration process, which would give them legal status within Trinidad and Tobago and allow them to work for one year. Screenshot taken from a YouTube video published by TTT Live Online.

The registration process that the Trinidad and Tobago government promised to introduce in an effort to regularise Venezuelan asylum seekers is officially underway. The two-week-long initiative, which began on May 31, 2019, will afford undocumented Venezuelans amnesty so that they can be put on the record and legally recognised in Trinidad and Tobago.

Registering will also allow asylum-seekers the ability to work for one year, a measure that should minimise the exploitation that many currently face.

Venezuelans have been fleeing their country to neighbouring territories as a result of their country's political problems, which has given rise to violence, exacerbated poor living conditions and increased shortages of critical supplies like food, toiletries and medicine. At its closest point, the Caribbean twin-island nation of Trinidad and Tobago lies just 14 kilometers (8.7 miles) north of Venezuela.

The United Nations High Commissioner for Refugees, UNHCR, estimates that Trinidad and Tobago's “population of concern” comprises more than 10,000 people — among them, 800 refugees and 9,985 asylum-seekers, most of whom are from Venezuela.

However, Rhonda Maingot, head of Living Water Community, a UNHCR implementing agency that handles the resettlement of Venezuelan asylum-seekers, wonders how many will actually participate. Trinidad and Tobago's Minister of National Security, Stuart Young, has already said the process is not a “get out of jail card,” and many people who have fled the country feel vulnerable.

Erika Guevara Rosas, director of the Americas with Amnesty International, issued a statement two days before the registration process was due to begin. While the organisation welcomed the initiative, it questioned whether the allocated period of two weeks was sufficient:

Amnesty International […] would like to receive further information about how your government proposes to process all the applicants in such a limited period of time, and how it plans to safeguard the confidentiality of those that register and ensure that it does not fall into the hands of the Venezuelan authorities.

Journalist Soyini Grey took offense to Amnesty's use of language and tone. In a private Facebook status update (republished with permission), she said:

I try to be a mature thinking adult, but Lord if I didn't say that Amnesty International was a trigger I lie.

They could have a point with which I agree, but always with a superior tone, that makes me see red.

‘…while it wel­comes the Gov­ern­ment’s plan to reg­is­ter Venezue­lans in this coun­try, it wants as­sur­ances that the con­fi­den­tial in­for­ma­tion re­ceived will not fall in­to the hands of the Venezue­lan Gov­ern­ment.’

I mean, why would you need to say that? You feel that we are savages who don't know what the word ‘confidential’ means? […]

It is not the first time that Trinidad and Tobago has been chastised over the issue. The country's repatriation of 82 Venezuelans in April 2018 drew harsh words from the UNHCR, which called the move a “forced deportation” that breached international law.

Although Trinidad and Tobago's cabinet adopted a national policy to address the pressing issue of refugees and asylum-seekers in 2014, they have not put it into practice. In a statement to the UNHCR, the government said that although it had acceded to the 1951 Refugee Convention, and is signatory to both the UN Convention Against Transnational Organized Crime and the UN Convention on the Protection of the Rights of all Migrant Workers and Members of their Families, a lack of legislation “has hindered the application of proper protection principles for refugees and asylum-seekers.”

As a result, asylum-seekers, displaced and stateless people, and even those with UNHCR refugee status end up being treated as undocumented migrants, with little or no protection and — according to a January 2019 Refugees International report — “forced into illegality”.

The registration process will give Venezuelans who have fled the opportunity to claim a level of protection that extends far beyond the terms of Trinidad and Tobago's Immigration Act, which holds that undocumented migrants can be detained, fined and deported.

Local reactions to the registration process have been mixed. While some noted that most citizens of Trinidad and Tobago were migrants, some have fears that the country will not be able to withstand the economic burden.

Following a recent incident in which a boat filled with Venezuelans traveling from the Venezuelan city of Guiria to Trinidad sank, some say that news of the registration process may encourage asylum-seekers to take risks.

The irony of such a response was not lost on Facebook user Joseph Drayton, who posted:

[On May 30, on which Trinidad and Tobago celebrates Indian Arrival Day] we celebrated the #Arrival of a people seeking a better life. They came with different names, cultures, physique and language. We are who we are because they came.

24 hours later our offsprings shouting ‘#sendthemback … to others coming.

Meanwhile, local authorities say they are well prepared to accommodate large numbers of registrants over the two-week period. The process ends on June 14, 2019.