Their debut World Cup match is against Brazil on June 9 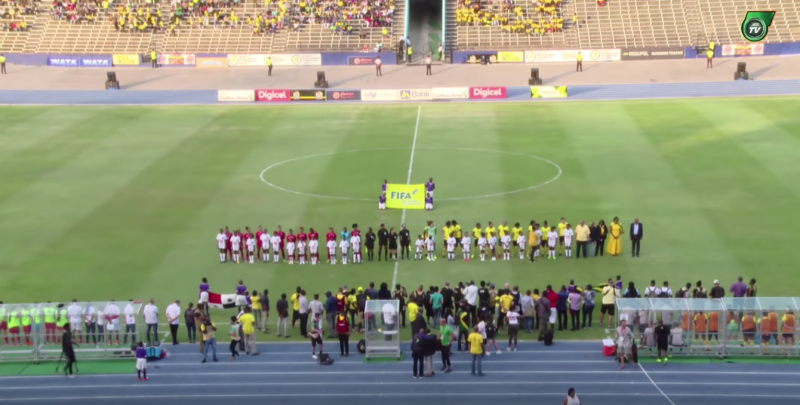 A screenshot from a YouTube video of Jamaica's Reggae Girlz in a pre-World Cup international friendly match against Panama on May 19, 2019. Jamaica won the match 3-1. Video published by JFFLIVE.

The Reggae Girlz, Jamaica's women's football team, are in France to play in the 2019 FIFA Women's World Cup. Ranked 53rd globally, the female counterpart to the country's Reggae Boyz will make their debut appearance at against Brazil, currently in 10th place, on June 9. It will be no walkover match, but the Reggae Girlz have arrived — announcing their presence on the world stage — and that in itself is a remarkable achievement.

The team's story began in 1991, when they played their first international match against Haiti, losing 1-0. Despite this tentative start — and some challenging hurdles over ensuing decades — the Reggae Girlz have emerged to become the first Caribbean women’s team in history to qualify for the World Cup.

They have paid their dues. As a local women’s league that struggled for many years with minimal sponsorship, the national team was abandoned altogether in 2008 when the Jamaica Football Federation (JFF) cited a lack of funds.

Then, in 2015, along came an unlikely rescuer: Cedella Marley, whose father, Bob, was a well-known lover of the game, recognised the Reggae Girlz’ plight and persuaded Florida-based coach Hue Menzies to volunteer his services.

After a disappointing World Cup campaign in 2015, leading to Jamaica's second disbandment of its women’s league the following year, Menzies took charge again in 2018, with Marley’s full support. The Girlz vanquished Panama in a dramatic penalty shootout to qualify for the 2019 tournament.

Part of Menzies’ motivation was to help change local attitudes toward women in football:

I took the project, it wasn't really a soccer deal but to try to see if we can change the mindset of how our people perceive females playing football. In my culture, females mainly do track and field and netball and they thought soccer [in general] is a poor man's sport and they didn't see that females could play football. That was the main reason that I took the job. Sometimes when you do something for a different purpose, good things happen.

Marley, who is CEO of Tuff Gong International and the Bob Marley Foundation, tweeted her support after attending the Girlz’ last match in Jamaica before they left for France:

The Reggae Girlz would not have become the first Caribbean nation to qualify for a Women's World Cup without the help of Cedella Marley.

The team has now been added to the official FIFA 2019 video game and boasts its own symbolic mascot:

Our Mascot REGGAE TOYA is the replica of the very first TALKING JAMAICAN Patois doll created to empower black kids so they too can feel a sense of self love and self -pride. Thank you Zuree Dolls for partnering with the Foundation in support of Women’s Football in Jamaica. pic.twitter.com/lB2yVuupPH

The Reggae Girlz will debut at the World Cup on June 9, 2019. I congratulate the Reggae Girlz on their remarkable success and encourage all Jamaicans to support the team. pic.twitter.com/dPU9AJkKd9

Under Menzies’ guidance, the Girlz have been playing and improving their skills mostly in European clubs, although several team members study and play at colleges in the United States. One member of the squad, the highly-rated Jody Brown, from rural Lime Hall, Jamaica, is still in high school.

Statuesque striker Khadijah “Bunny” Shaw, The UK Guardian's Footballer of the Year 2018, is also rapidly gaining star status in Jamaica. Born in the tough city of Spanish Town, she grew up in a large family, learning to play football with the boys, barefoot on the street. She has lost three brothers to gun violence, but stuck to her studies and recently graduated from the University of Tennessee.

Despite such inspiring stories, the question remains: What happens after the World Cup?

Is women’s football in Jamaica (and the wider Caribbean) sustainable? Will local sponsors finally step up to the plate, whatever the results in France? Will the Jamaican public remain fired up about the Girlz, or will the euphoria wear off?

Whatever the future holds, Jamaicans are going to enjoy the next few weeks of the competition. Some of the Reggae Girlz’ new-found fans are packing their bags to go and wave the Jamaican flag in France, while others will be cheering them on at watch parties in living rooms, sports bars and clubs across the island and throughout the diaspora.

There's even a song to support the team, with the refrain “Strike hard!”

That's exactly what the team's supporters are hoping the Reggae Girlz will do in France. Jamaica's football focus has always been on its men's team, despite the fact that it has lacked cohesion since qualifying for the 1998 World Cup.

Now, it's time to pay attention to the calibre of the women's game. Thanks to the Reggae Girlz, Jamaica has been listed in the FIFA franchise for the first time since 2006 and the hope is that they will fly the flag just as high as their male counterparts.