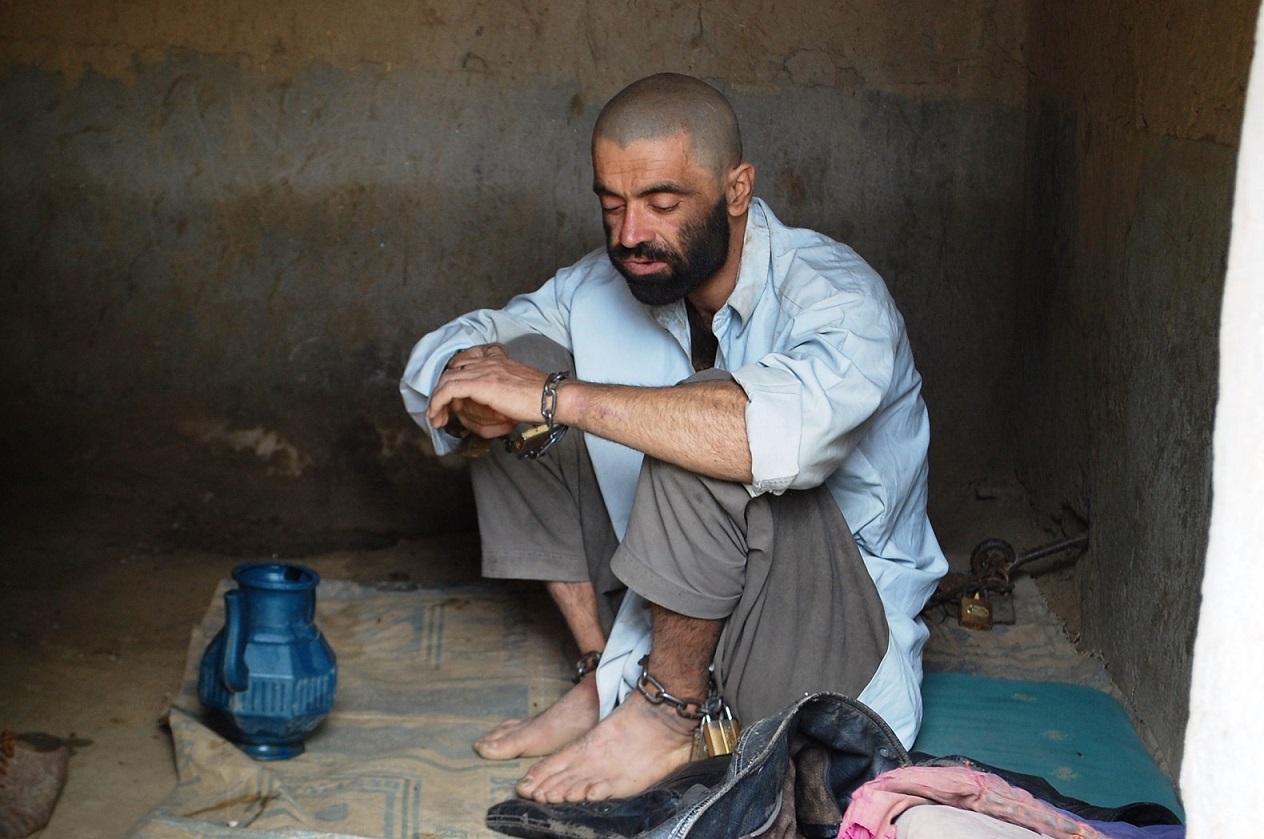 A patient sits in chains at the Amyalli Shrine located on the outskirts of the eastern city of Jalalabad. Photo by Ezzatullah Mehrdad.

The Mia Ali Baba on the outskirts of the eastern Afghan city of Jalalabad is primarily a pit stop for pilgrims seeking God's blessings, but it doubles up as a temporary shelter for the mentally ill.

Mentally ill people, known locally as “haunted”, are brought here by their families for 40 day-stints in the muddy yard of the shrine that has ten separated rooms. They are kept in chains for long parts of the day by a local caretaker and are made to eat and squat in the same place. Their daily sustenance is a piece of bread, a red chilli and a glass of water.

“Allah is great,” says an optimistic local taxi driver who took me to Amyali. “After 40 days in the shrine, the patients are cured.”

Such practices are not driven by superstition alone. Families with limited budgets face a tremendous burden in caring for their mentally ill relatives. Outside the capital — where it is inadequate — proper psychological care is often simply unavailable.

“If they receive (proper) treatment, their disorders might be controllable,” insists Dr. Jafar Ahmadi, an independent psychologist based in Kabul, who sees centres like the one near Jalalabad as reinforcing a culture of denial regarding mental health.

According to Afghanistan’s Health Ministry, one in two Afghans experiences stress due to the war in their country, while thousands suffer from diagnosable illness including Post-Traumatic Stress Disorder (PTSD), depression, schizophrenia, extreme anxiety, and bipolar disorder.

Although some of these conditions can be inherited, beleaguered doctors have little doubt that four decades of armed clashes, suicide bombings and airstrikes have reshaped the country's mental health landscape.

According to a new survey by Big Think, one in five Afghans suffer depression, more than anywhere in the world. The latest World Happiness Survey commissioned by the United Nations places the country as the third most unhappy globally, behind two other countries wracked by chronic violence and insecurity — South Sudan and the Central African Republic.

Ahmadi says that “at least one or two people are under treatment and recovering from suicide in hospitals across Kabul every night.” PTSD is one of the main drivers of suicidal tendencies, he added.

Social stigma is another barrier to accessing health treatment.

Bashir Ahmad Sarwari, who directs Department of Mental Health and Substance Abuse at the Afghan Ministry of Public Health, complains that poor understanding of mental health infiltrates every level of a system that should be rising to meet this national challenge.

“People do not know about mental health illness and come up with various names for sufferers — idiots, crazy, stupid, or haunted,” he told Global Voices.

“The stigma toward mental health illness is everywhere, not only among ordinary Afghans but also among doctors, staff, politicians, and policy-makers,” Sarwari argues. 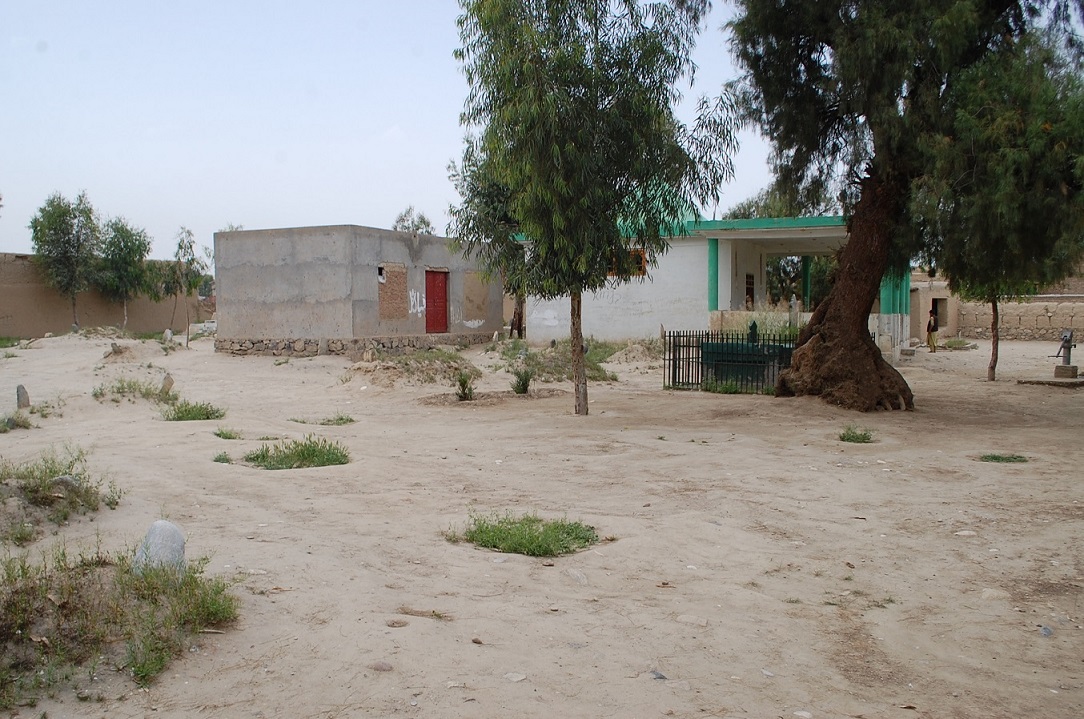 The muddy yard of Amyalli Shrine in the outskirt of Jalalabad city. Photo by Ezzatullah Mehrdad.

The Mental Health and Addiction Recovery Hospital in Kabul, a specialized hospital where 100-150 patients each day come from across the country, is widely acknowledged as the best.

Yet critics say that even here, professional standards fall well short of those in other countries. Due in part to overwhelming demand, patients are often sent home quickly after being given a prescription for psychotropic drugs.

One patient who was able to secure a stay of over a week at the hospital, a 40-year old man from Baghlan province called Faridon, complained to Global Voices that it was difficult to persuade doctors that he needed to stay longer.

“The doctors wanted to discharge me,” said Faridon, who said his mental health problems had been compounded by marijuana use. “I begged them to keep me in longer.”

When this author observed Faridon's medical file was mostly blank, staff claimed information about his condition was in “another office.” 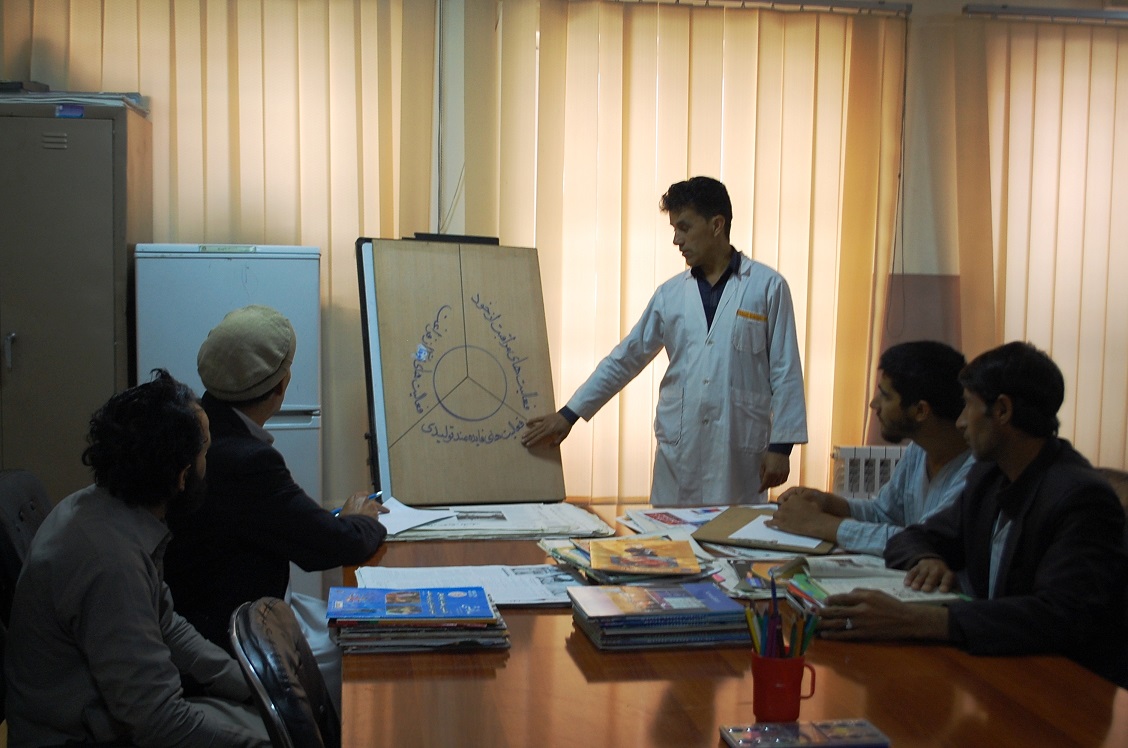 The Rehabilitation Center of the Mental Health and Drug Addiction Hospital hosts a session attended by four patients. Photo by Ezzatullah Mehrdad.

Dr. Ahmadi, the independent psychologist, says that a lack of mental health infrastructure in Afghanistan has moved many patients to seek treatment in neighbouring Pakistan and India, where facilities are typically better.

Due to lack of finances, however, they often return to Afghanistan before they can complete treatment regimes.

In Afghanistan, meanwhile, “medicines mentally ill people take can actually worsen their diseases”, because they are not complemented by proper therapy, Ahmadi warns.

“We cannot continue dealing with mental health ill people by writing out an amulet,” said Ahmadi, reflecting a practice popular among religious conservatives.

“Patient therapy is a distinctive process and it must be professionalized.” 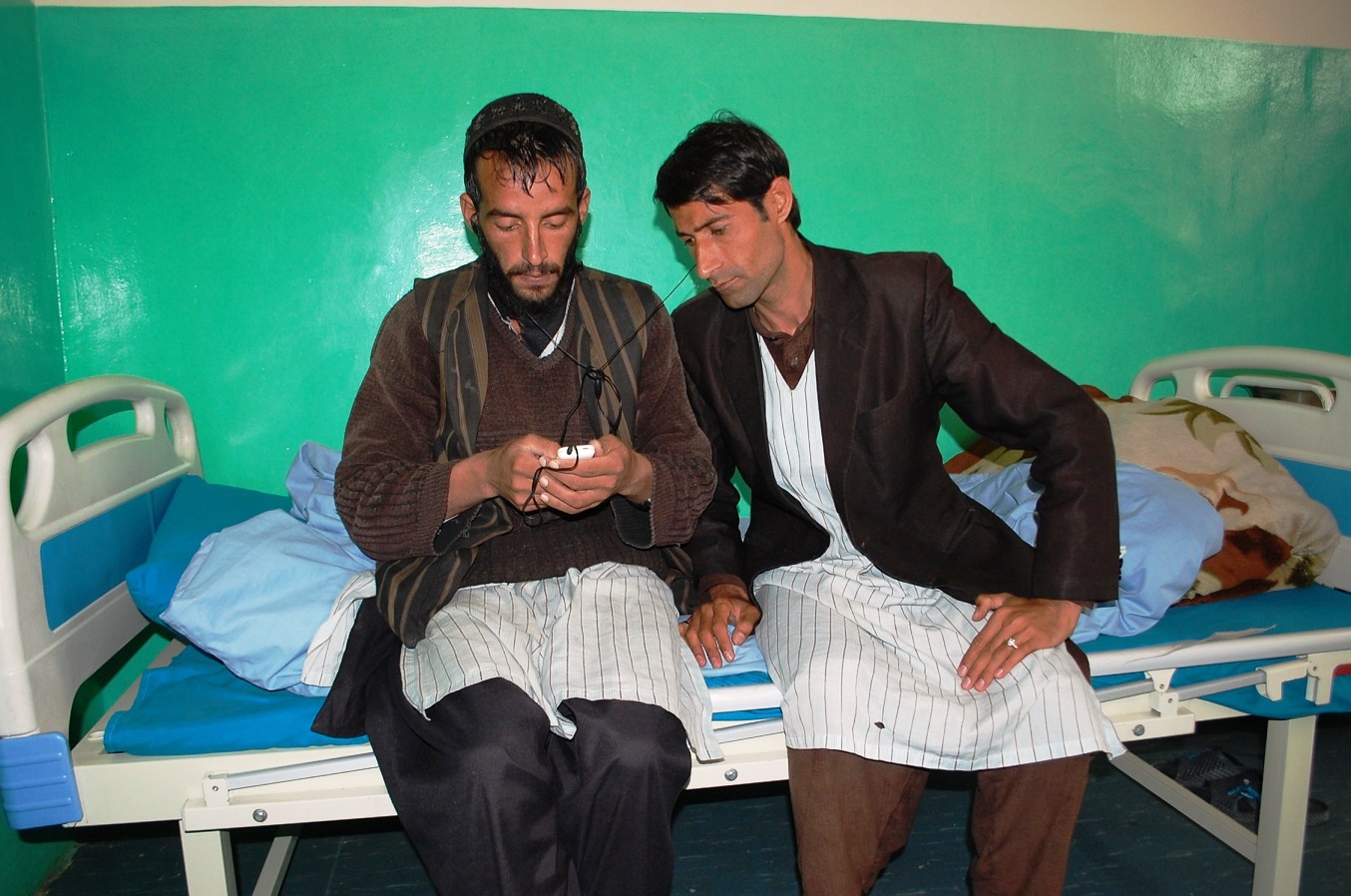 Faridon, 40-year old, right, sits next to another patient in a bed of Mental Health Hospital, listening to a song. Photo by Ezzatullah Mehrdad.