Kazakhstan's young, creative class 'wakes up' – will the rest follow? 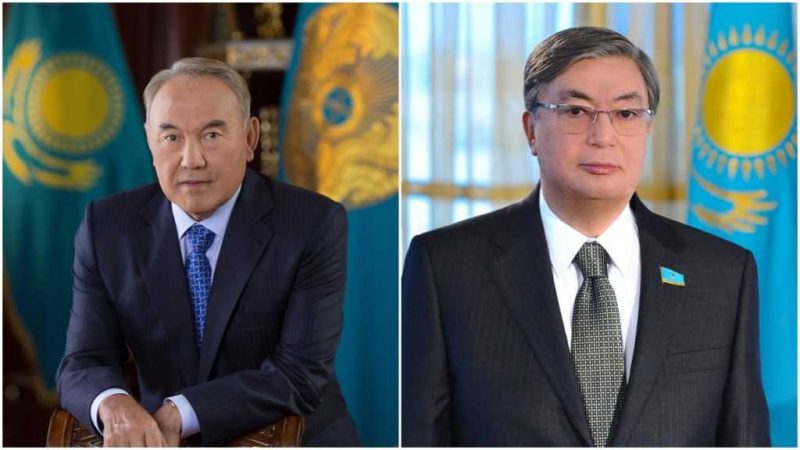 Nursultan Nazarbayev (left) has handed over the presidential reigns to Kassym-Jomart Tokayev but will continue to wield power. Government images.

Art imitates life, and then life returns the favour a thousand times.

The Kafka-esque capacities of the Kazakh state to bungle, befuddle and amuse have been on full display in recent weeks, as authorities smooth the ground for an election in keeping with Soviet traditions.

Nursultan Nazarbayev, who has led Kazakhstan since before the Central Asian country's independence from Moscow in 1991 relinquished the presidency in March, hinting that time had come for a change.

His interim successor Kassym-Jomart Tokayev is expected to win the June 9 vote by a landslide.

But former foreign minister and Senate leader Tokayev's most notable policy so far has been to propose and sign off on the renaming of Kazakhstan's capital in honour of Nazarbayev. The career loyalist has also pledged to continue Nazarbayev's “strategic course”.

Such is the change that doesn't seem to be about change at all. 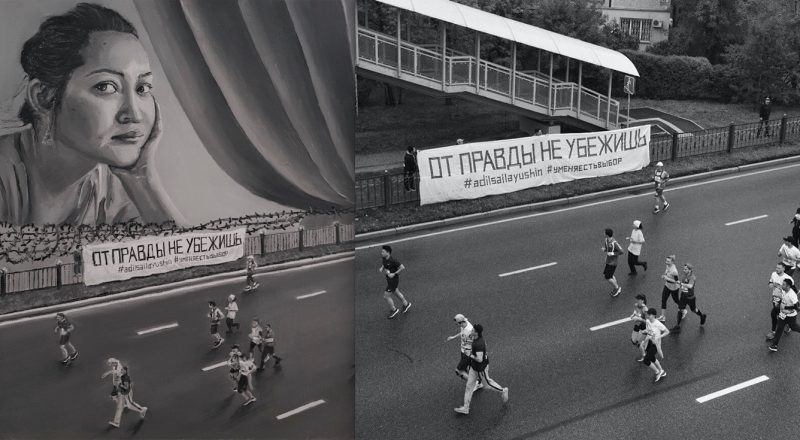 Artist Saltanat Rakhat's interpretation of the “You Can't Run From the Truth” protest (left) next to a photograph of the protest taken by Tamina Ospanova. Tribute art collected by the Adamdar website and republished by Global Voices with permission.

These were the messages of young activists determined to show their profound rejection of an authoritarianism they no longer fear.

The Russian and Kazakh language slogans unfurled on a banner at a city marathon on April 21 earned 34-year-old Asya Tulesova and 20-year old Beibarys Tolymbekov detention sentences of 15 days each.

Tulesova was provoked repeatedly in jail where she staged a hunger strike, while Tolymbekov was packed off for compulsory military service shortly after their release a day early on May 5.

Three friends that filmed and photographed the protest, Suinbike Suleimenova, Aidos Nurbolatov, and Aigul Nurbolatova were also arrested and fined.

But you can't run from the truth.

Hundreds of citizens have been arrested for staging peaceful protests across Kazakhstan since a de-facto currency collapse in 2015 dramatically increased antipathy towards Nazarbayev's regime. In most cases demonstrators are lucky if they have time to gather.

There is a deterrence logic at work here — dissatisfaction is high and if police do not make arrests the protests will grow in size.

But in the case of Tulesova and Tolymbekov, the regime's disproportionate response to the publicity stunt backfired spectacularly. 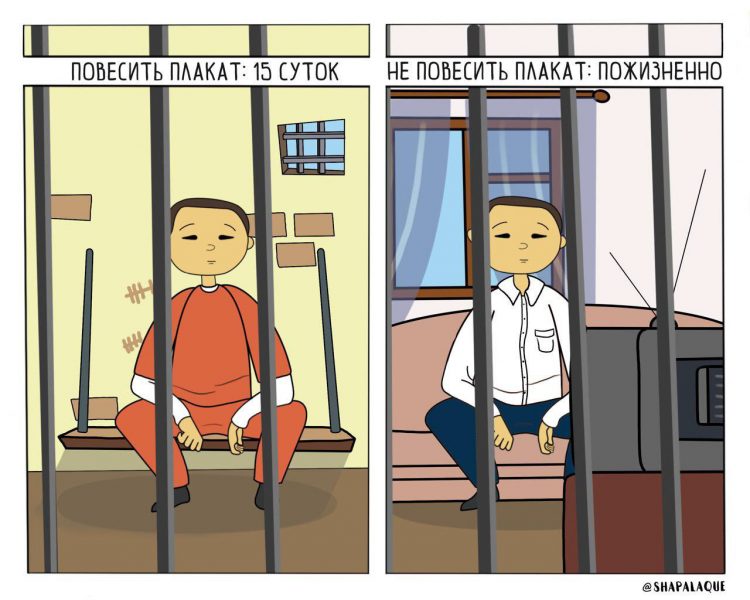 ‘Hold up a banner: 15 days detention. Don't hang up a banner: Life sentence.’ Comic art by Le Shapalaque Comics. Tribute art collected by the Adamdar website and republished by Global Voices with permission.

Almost overnight #Otpravdineubezhish (Russian for ‘You can't run from the truth’) became a meme to rival any other in the country's online history.

People sympathetic to the arrested pair wore t-shirts in homage to the banner at public events. A frame dedicated to the meme soon adorned profile photos across Kazakhstani Facebook.

Solidarity protests sprang up in cities across Europe as well as New York and Los Angeles. 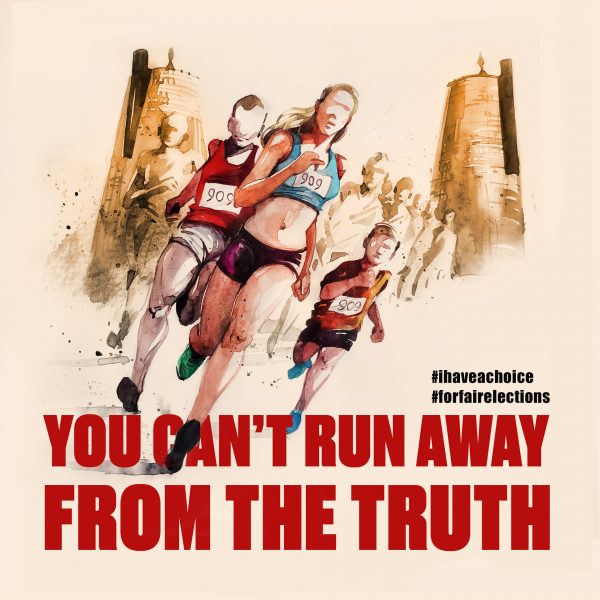 An artistic tribute to Tulesova and Tolombekov by Sreenihai Pouka, an Indian graphic designer based in Milan. Tribute art collected by the Adamdar website and republished by Global Voices with permission.

Then there were the court hearings themselves, where the judiciary's creative interpretation of the law and the behaviour of court officials only produced more fodder for artists and satirists.

In one instance during Tolymbekov and Tulesova's trial, a clerk was asked by the defendants’ legal team to explain why the court protocol referred not to the “You Can't Run from The Truth” banner, but to a completely different one, held up by different citizens at a protest eight years ago.

He called it a “technical mistake.”

In another comic moment, court staff were asked by the judge to display the banner that Tolymbekov and Tulesova had held up at the marathon.

Court spectators giggled as they fulfilled the order, noting the judge had unwittingly succeeded in repeating the pair's protest. 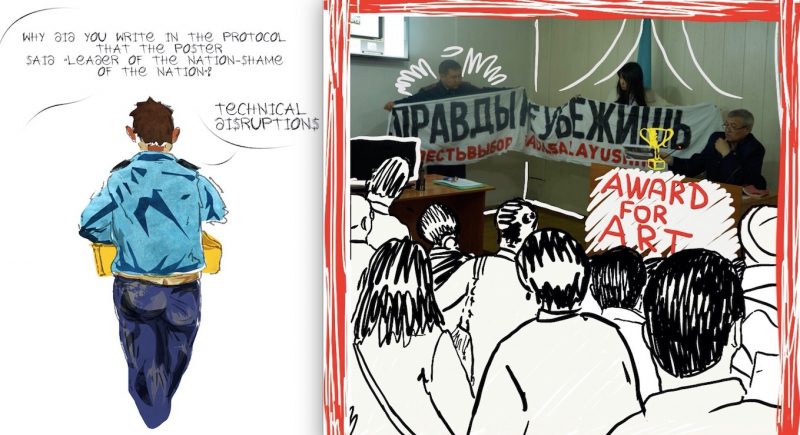 Image on the left by Balnura Nusipova. Image on the right by Pasha Kas and Nadir Saryshayan. Tribute art collected by the Adamdar website and republished with permission.

An anti-protest law that makes holding unsanctioned demonstrations illegal provides Kazakh judges with a useful legal pretext to try protesters, even in the case of very small demonstrations.

Activists complain that the law violates the right to peaceful assembly enshrined in the constitution.

But how could the court possibly justify fining the people that filmed them?

Suinbike Suleimenova's final speech before the court during her appeal on May 16 exposed the absurdity of the charges against her in full. 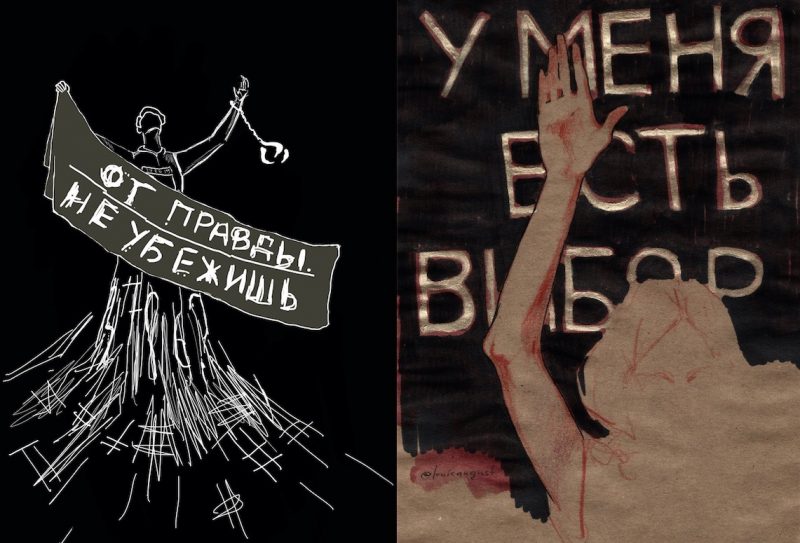 ‘You can't run from the truth’ (left) by Arna Bakhitova. ‘I have a choice’ (right) by Luiza Djapkayeva. Tribute art collected by the Adamdar website and republished by Global Voices with permission.

“When my status changed from witness to suspect the only argument the police made was that I knew who Asya was. For me, this is not an argument, and this only confirms the political nature of the prosecution,” Suleimenova said.

Supporters attended Suleimenova's appeal with masking tape labels across their mouths bearing the Kazakh word for “shame” — “uyat” — and later posed for a photograph in front of the judge's bench.

The Adamdar website called the collective demonstration “one of the most significant art protests in the history of Kazakhstan.”

Photo by Malika Autalipova, co-founder of Adamdar. Used with permission.

But where does the country go from here?

According to another activist, Aslan Sagutdinov, repression “will only get worse” unless things change soon.

Sagutdinov, a video blogger, was briefly arrested in the northwestern city of Uralsk on May 6 for holding up a blank placard in a deeply ironic protest.

Despite his subsequent release without charge, Kazakhstan earned itself mocking coverage from the New York Times and the BBC.

“We shouldn't be surprised by these things,” Sagutdinov told Radio Free Europe's Kazakh service of the police response. “There isn't and endpoint to this.”

The majority of politically conscious youth appear to reject the election as an exercise in false democracy.

This is unfortunate for the ballot's token opposition figure Amirzhan Kosanov, a long-time journalist, whose adoption of “You Can't Run From The Truth” as a title for Q&A sessions on Facebook suggests an attempt to appeal to a younger electorate.

But with no history of free and fair elections in Kazakhstan, what is there to convince this demographic that the change they crave can be achieved at the ballot box?

Rather than any candidate, the new youth's sentiment seems best represented by a recent video that features both Suleimenova and Tulesova. It is titled #менояндым: #Ihavewokenup.