In Myanmar, Buddhists offer white roses to Muslims during Ramadan 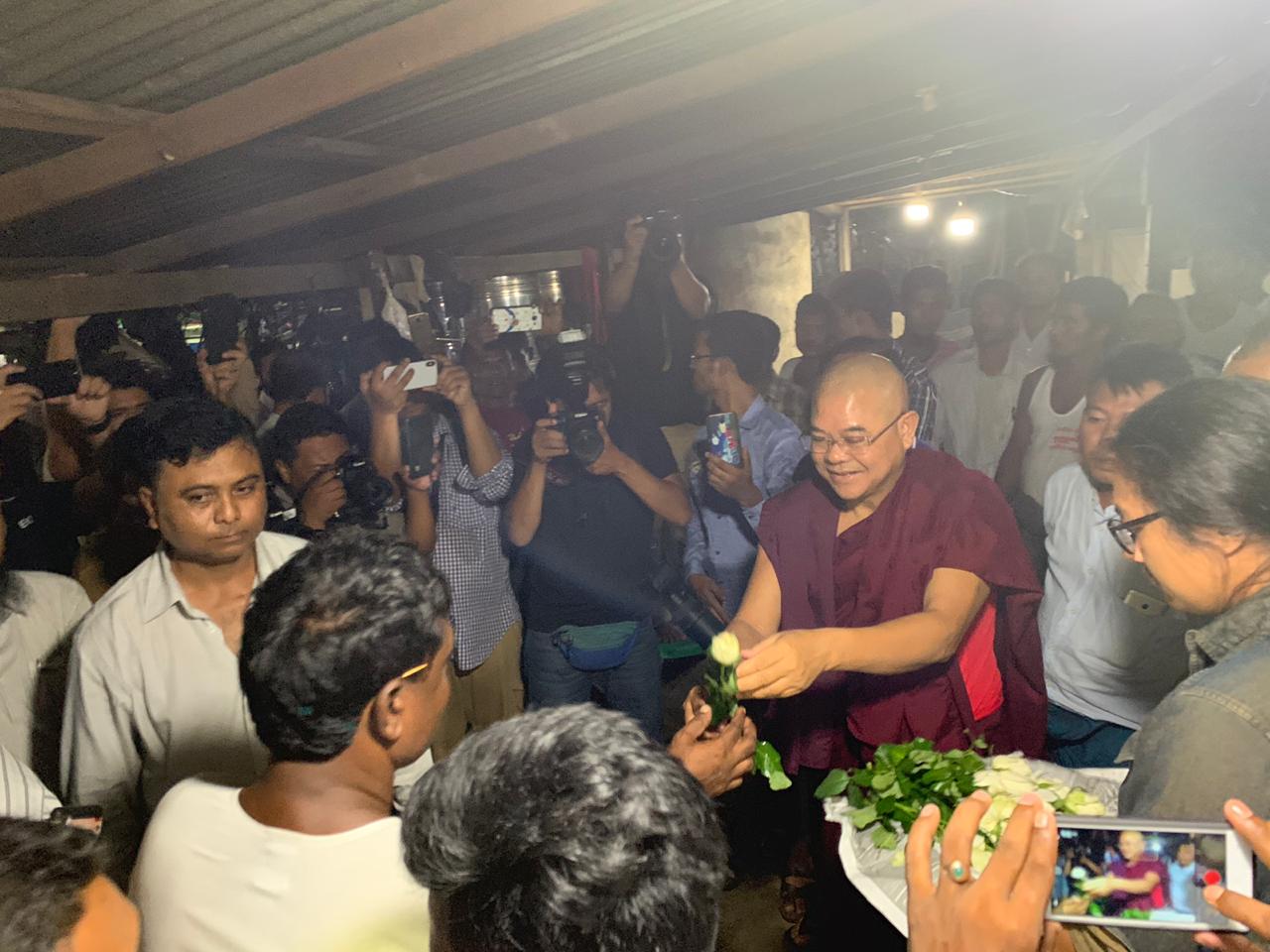 On 16 May 2019, a group of Buddhists in Myanmar's former capital, Yangon, launched a ‘White Rose’ campaign which offers roses to Muslims who are fasting during Ramadan. The campaign was organized to show solidarity with Muslims after Buddhist mobs gathered around a number of temporary Muslim prayer houses and demanded that prayer services be suspended.

On the evenings of 14 and 15 May, mobs of more than 100 Buddhist extremists attempted to prevent Muslim prayers, demanding that three prayer houses set up for Ramadan observance in the South Dagon area of Yangon be closed down.

In response, Buddhist monk Bandatta Seidatta, more famously known as Asia Light Sayardaw, created the White Rose campaign. Bandatta Seidatta visited the South Dagon Muslim community on the evening of 16 May to offer them white roses as a way of providing encouragement and support. The campaign has been joined by interfaith activists, and in just one week, it has spread to other cities across Myanmar, including Mandalay, Sagaing, and Mawlamyine — even reaching Myanmar communities in Malaysia. The campaign continues to urge citizens in Myanmar to offer a white rose to their friends regardless of ethnicity or religion.

A statement from the campaign's official page reads:

White rose for peace movement is the movement of the citizens of Myanmar who love peace and value equality and social harmony, by resisting those who intentionally spread hatred and provoke ethnic and religious instability in Myanmar right now. 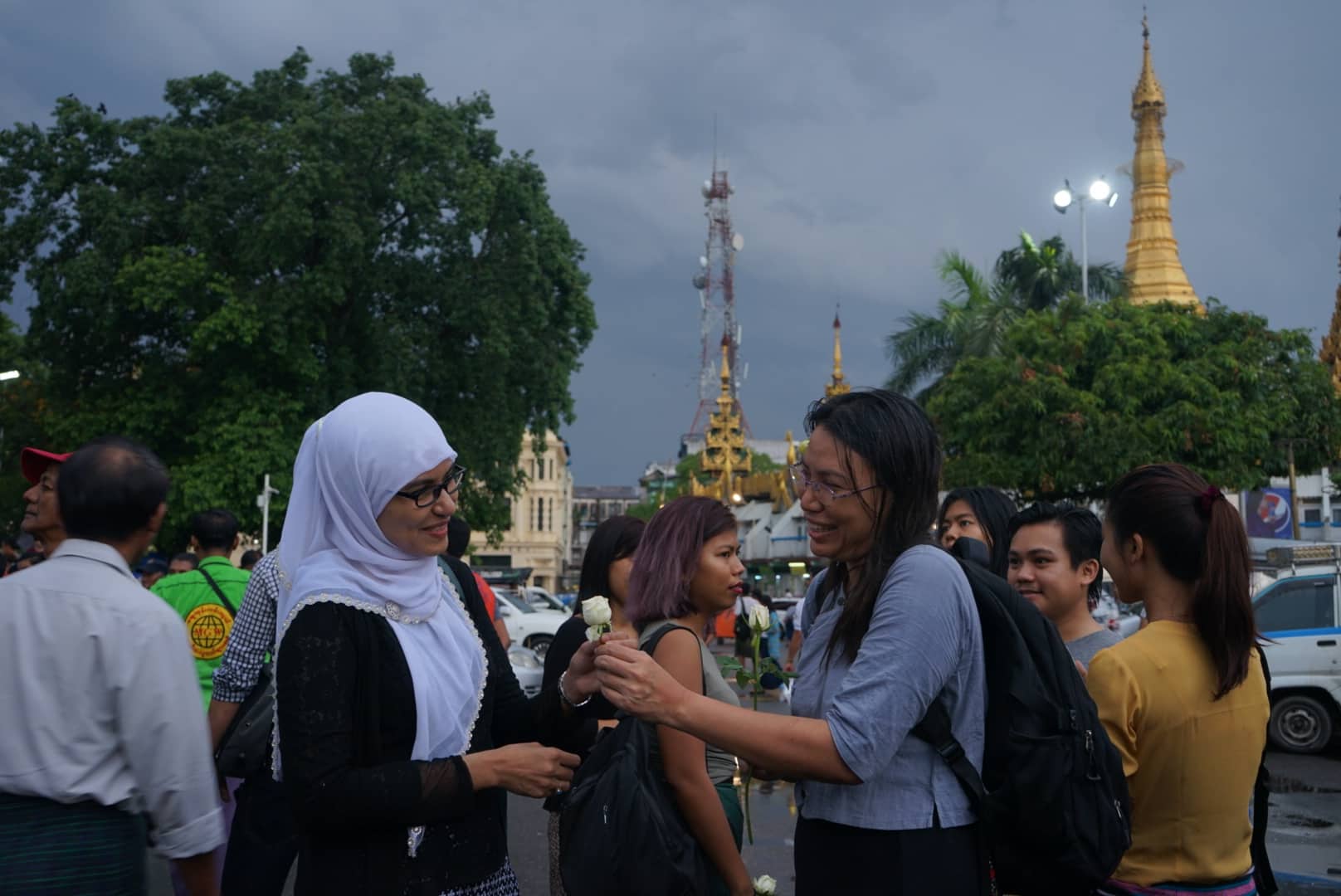 Meanwhile, some netizens responded to the harassment of Muslims by changing their profile pictures with this frame endorsed by the Yangon Youth Network:

There is no place for religious extremists in our country.

Myanmar has a predominantly Buddhist population. Current Buddhist extremist movements in Myanmar were started by a radical group called MaBaTha in 2014. Although MaBaTha was declared unlawful by state bodies, the 969 movement initiated by the group and its leader Wirathu has inspired widespread discriminatory extremist movements and pervasive online hate-speech against Muslim minorities in the country. Since 2012, Myanmar has experienced several instances of religious conflicts across the country, including the large scale communal violence between Rohingya Muslims and Rakhine Buddhists.

To rebuild social cohesion among Buddhists and Muslims in Myanmar, civil society leader Thet Swe Win believes that government leaders must step up to speak about social harmony. He said during a recent interview by Irrawaddy News Agency that:

I attach greater importance to the moral leadership of political leaders. […] Frankly speaking, our leaders fail to provide moral leadership. Millions of Rohingya fled and many people died. […] They should at least acknowledge on humanitarian grounds that they had been living in the country, and are now in trouble after they left the country. Muslims have suffered, and Arakanese people are suffering now, and so are Kachin and Shan people. Only when a leader defines the norms and values of [a] society will people be able to follow. […] One day when we have leaders who dare to say the country has no place for people with such amoral attitudes, and define clear moral standards for the society, then, hopefully there will be some changes to our society.