The Pride Parade will be held on June 29 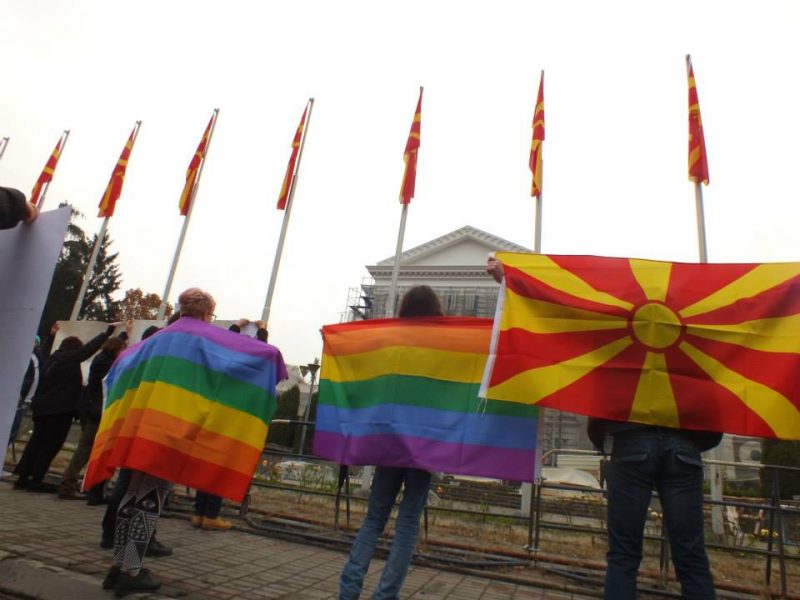 Activists protest for LGBTQ+ rights at the March of Tolerance 15 Nov 2014 in Skopje, the capital of North Macedonia. Photo by Coalition Margins, used with permission.

The LGBTQ+ community in North Macedonia announced the country will hold its first pride parade ever on June 29, 2019, in the capital Skopje.

North #Macedonia To Hold First #Gay-Pride Parade Next Month: The event will be "a form of protest for affirmation, support, and protection of human rights" of the lesbian, gay, bisexual, and transgender (#LGBT) community https://t.co/uMwIdmzTAD

North Macedonia will join a group of Balkan countries that have recently announced or held their first gay pride parades. Earlier this month, Bosnia and Herzegovina said it'll hold its first pride march in September 2019, while Kosovo held its second-ever march in October 2018.

North Macedonia's march was made public by the National Network on Fight Against Homophobia and Transphobia in a press conference on May 20. Irena Cvetkovic, an activist with the group, said:

A very difficult period has passed for the LGBT community and we consider that now is the moment for a Pride Parade, because we passed the worst. North Macedonia is the last country in the region that organizes a Pride Parade.

Cvetkovic was referring to the 2006-2017 rule of the conservative VMRO-DPMNE party, a period when homophobic violence was markedly tolerated by government officials

During the 11-year period, Skopje witnessed a spate of violent attacks against LGBTQ+ organizations and people, and right-wing politicians and pro-government media were openly hostile to this population.

In the summer of 2013, what would have been the North Macedonia's first pride march was canceled ahead of schedule after authorities said they could not guarantee the security of attendees. Shortly beforehand, the building of an LGBTQ+ support center was set on fire. In 2014, the same building was attacked by a mob of men throwing rocks and glass bottles. A police investigation ensued, but no one was arrested.

A new government, a new era for LGBTQ+ rights

The new, pro-Western government of North Macedonia has so far shown a different approach to LGBTQ+ rights in comparison to its predecessor.

For instance, former Prime Minister Nikola Gruevski used to take great pains in order to avoid meeting with openly gay foreign dignitaries on camera: when German Foreign Minister Guido Westerwelle visited Skopje in an official mission in 2012, Gruevski only spoke on the phone.

In contrast, current Prime Minister Zoran Zaev has participated in public events by the same LGBT support center that was attacked five years ago.

In March 2019, a parliamentary majority voted to include sexual orientation as grounds for discrimination in the Law Against Discrimination, in accordance with recommendations by the Organization for Security and Co-operation in Europe (OSCE) and the Venice Commission.

Another activist with the National Network on Fight Against Homophobia and Transphobia, Antonio Mihajlov, said about the upcoming parade during the press conference:

The gay parade will be a form of protest for affirmation, support and protection of human rights of the LGBTQ people.

He added that the event will be open for all to attend, no matter their nationality, faith, gender or sexual orientation.

LGBTQ+ community in the Western Balkans

When the LGBTQ+ community in Bosnia and Herzegovina announced it will hold the country's first pride parade on September 8, it attracted mixed responses on social media and virtually no acknowledgment from government officials.

In the past, authorities in the capital Sarajevo have denied permission for similar marches and protests.

Sarajevo will host Bosnia and Herzegovina’s first gay pride parade on September 8, according to the country’s LGBTQ activists.https://t.co/b6MsuENgjz

Novi Sad, Serbia’s second-largest city, had its first pride parade on May 17, 2019. This day was designated by a number of LGBTQ+ organizations worldwide as the International Day Against Homophobia, Transphobia, and Biphobia (IDAHOT).

But episodes of intolerance were recorded. The director of the LGBTI Equal Rights Association for the Western Balkans and Turkey (ERA) and her partner were threatened with violence and with homophobic speech by a group of men after the march in Novi Sad.

Dragana Todorovic, Executive Co-Director of #ERA, and her partner have been attacked today, following the first Pride Parade in Novi Sad. Dragana and her partner have been verbally attacked with homophobic hate speech and threatened with violence by a group of men. The incident has been reported to the police, and we will monitor the process. #NoviSadPride #novosadskiprajd

Gay parades have taken place in Belgrade, Serbia's capital, for years. Since 2014, there have been no serious incidents as the marches are heavily guarded by police. Before 2014, gay pride marches used to be marred by violence.

Prime Minister Ana Brnabic, the first openly gay prime minister in the Balkan region, and the first Serbian woman in the country's top job, was among the participants in the 2017 and 2018 marches.

In October 2018, Kosovo staged its second pride parade under heavy security after a political party that espouses Islamic values urged the government to scrap the event, calling it “a parade of shame”. About 90 percent of Kosovo's population is Muslim and, like most of the Balkan region, socially conservative.

Still, the march carried on as scheduled:

Just a taste of the atmosphere in Pristina for Kosovo #Pride. ?️‍? ?? ?️‍? pic.twitter.com/jnBOOTZlpq

Montenegro announced on May 17, that the country's seventh pride will take place on September 21, 2019. Despite recent improvements for LGBTQ+ persons in recent years, discrimination and violence are still present, according to the march's organizers.

In Tirana, Albania’s capital, a pride parade happened on May 18. A manifesto by the organizers said:

“Today we marched for those who live a double life, for those brave people who came out of the closet and live with their true identity… We marched for their parents and families, telling them that an important part of the society supports them in their long way of accepting their kids. We marched for the thousands of individuals that receive the necessary assistance through SOS LGBT service”.

This Twitter user in Tirana couldn’t have rounded up better the weekend of the march:

First #Tirana Pride, then #Eurovision with #Madonna as the guest singer and a drag queen party later

This day couldn't get any more queer! ?