How Chinese tech workers are organizing the online #996 labor movement, despite risks of censorship

Workers are promoting their rights with memes and code repositories. 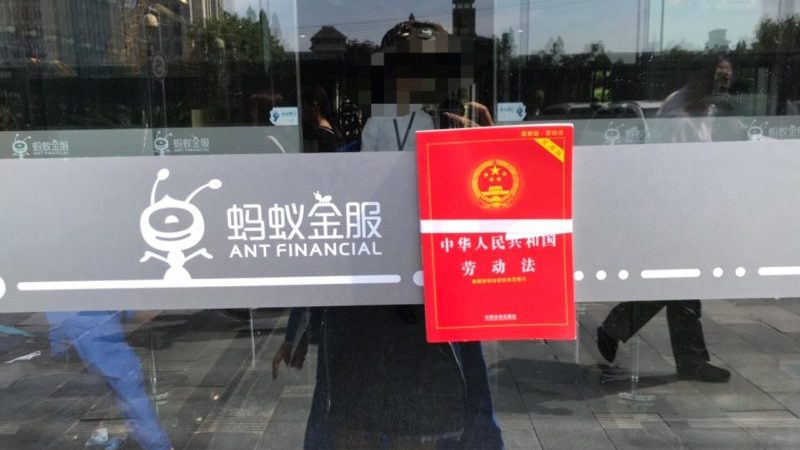 This story by Jason Li was originally published on the blog 88 Bar and is republished here with permission.

Among the millions of people employed in China's booming technology industry, a growing number are expressing discontent with the long hours that major companies like Alibaba and Tencent require of their workers.

The issue recently made headlines around the world in April 2019 after a group of Chinese tech workers published 996.ICU: an online letter and GitHub repository decrying a practice known as “996”, a shorthand for having to work from 9am to 9pm, six days a week. Although it has grown in size recently, the #996 notion and associated memes have been making the rounds online since 2015 (TechNode published a mini-history of the term) and usually refers to the long working hours at tech companies in China.

The letter read: “If you continue to tolerate the ‘996’ work schedule, you will risk your own health and might need to stay in an Intensive Care Unit someday.”

In response to the letter, the CEOs of Alibaba, JD.com and Sogou all rose to publicly defend the practice, which only furthered its popularity worldwide.

Will the censors let it stand?

Internet memes about social issues have a spotty history on China’s internet, where they have often been subject to censorship. Netizens have become adept at evading, obfuscating and masking their posts in an evolving game of censorship cat-and-mouse. This was the case with the infamous grass mud horse meme of the late 2000s, as it was with last year’s much-reported #MeToo sexual harassment meme, which netizens temporarily evaded by re-naming it or rice bunny ( ??), which sounds similar to “me too” when spoken in Chinese.

In contrast, 996 workplace protest memes have been given some room to run on the Chinese internet, unfettered by the powers that be, for the most part. 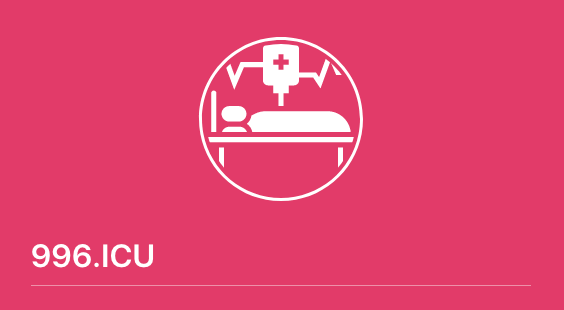 In contrast to other social movements and memes on the Chinese internet, #996 has taken shape largely on GitHub, the popular web-based hosting service where millions of web and software developers share code and exchange information and ideas about their work.

In May 2019, more than 242,000 users starred (favorited) the #996 GitHub repository where the letter, memes and other documentation about the movement are hosted, expressing solidarity with China’s tech workers

When the 996 meme first made headlines abroad, many worried that the Chinese government would step in and force Microsoft, owner of GitHub, to block access to 996.ICU within China. Western press outlets even began lionizing Microsoft employees as protectors of free speech after a group of them published an online letter asking their company not to censor itself. Luckily for the company’s executives, it never came to that.

The 996.ICU project on GitHub also has 500+ contributors and has been forked (remixed, loosely speaking) more than 20,000 times. These high figures indicate that the 996.ICU creators skillfully leveraged GitHub’s open collaboration features to attract people’s attention and to create a space for building an online movement and series of memes together.

Here are a few of the more popular memes tied to the movement:

一周文案 (“One Week Copywriter”) that was widely circulated on the social network: 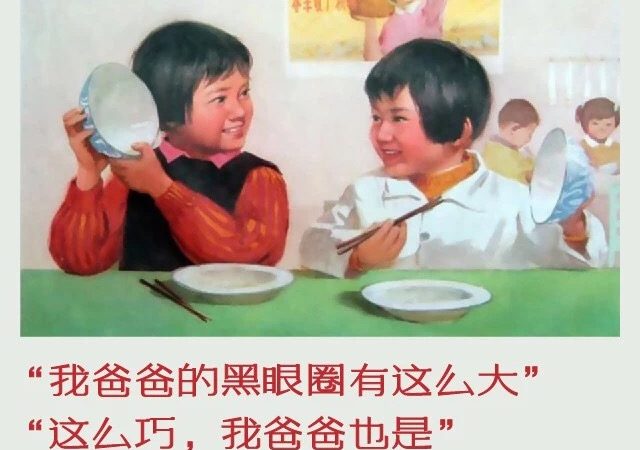 Poster caption: “My dad’s dark eye bags/circles are this big.” “What a coincidence, same with my dad.” (Daily Life of a 996 Fighter) 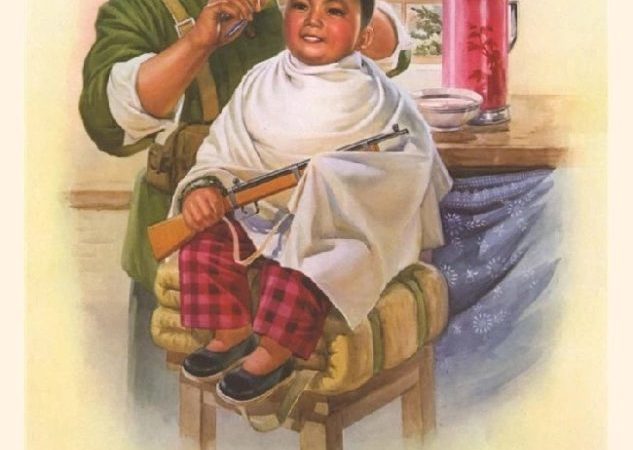 Poster caption: Let uncle shave you bald. Besides, when you grow up and join 996 you will lose it all anyway.

While these posters were squarely anti-996, Sina Weibo user 少年不打太极 (“Teenager does no Tai Chi”) captured a wider spectrum of the debate in their post, which includes the following images:

Image caption: If you don’t do it, I’m sure someone else will.

Image caption: Not defending 996, but respect to those in the struggle

Discussion about 996 was similarly vibrant on media social networking site Douban. One forum thread, 我们该如何对抗“996”？(How should we fight 996), was seen by over 2.5 million people and followed by 1500+ users.

Within that thread, one image set grew so popular that it spilled over onto Sina Weibo, where it appeared on many posts related to 996: 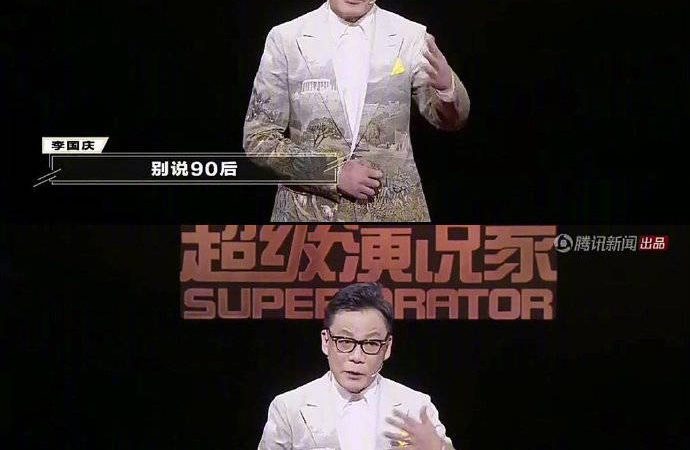 A partial excerpt of the image series. “Let’s not just talk about the post-90s generation. Even me, a post-60s generation wouldn’t accept it.”

The image set comprises TV screen captures of a speech given by Guoqing Li, the CEO of e-commerce giant Dangdang, in which he criticized 996 work culture. In it, he plays the kindly, wise patriarch, in stark contrast to his tech CEO peers at Alibaba, JD.com and Sogou who defended the practice.

The images and discussion above are still readily accessible a month after the 996 meme became an international news story. That they survived this long and are still easy to find suggests that the authorities in China decided to let the discussion play out rather than stifle it through censorship.

In fact, the government seems to be publicly denouncing 996 as well – major government-controlled newspapers China Daily and Xinhua News have both published editorials to that effect.

Tech companies push to tone it down

Though the government didn’t step in to interfere, China’s tech companies jumped in to defend their honor. To begin with, there are at least several instances where Sina Weibo stepped in to moderate the conversation – not to kill it, but just to tone it down a little. For example, the original post with the remixed PSA posters above was taken down, according to the creator, on grounds that it a) contained sensitive elements from its use of propaganda posters, and b) had become too popular and controversial. One screen capture of the post indicates that it had at least 3400 shares, 400 comments and 2300 likes.

Yet Weibo did not ban all instances of the image on its platform, and the images can still be found on many other, albeit less popular, posts. Outside of Weibo, the images have not provoked the ire of any larger powers that be and can be found on the websites of multiple online publications.

Chinese tech giants also fought back in one other obvious if perhaps half-hearted way. As Abacus and the Economist report, Alibaba, Tencent, Qihoo 360 and Xiaomi blocked access to 996.ICU on web browsers that they had control over. The block, however, seems to have been limited to the online letter and/or GitHub repository, and was not applied to the rest of GitHub.

Instead of stifling the movement altogether, China’s tech companies, government newspapers and kindly CEO patriarchs have instead worked together (wittingly or not) to limit the furor, steer the discussion, and create just enough room so that a workplace protest meme may survive on the Chinese internet of 2019.

Jason Li is a designer, illustrator and consultant currently based in Hong Kong. Once upon a time, he studied engineering and ran a news site about fan translations of video games.