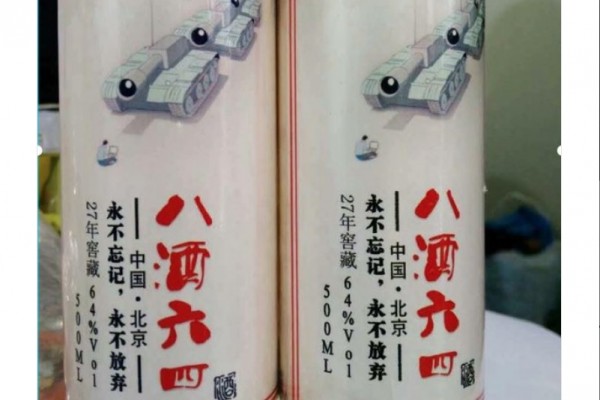 The following post is originally written by Jennifer Creery and published by Hong Kong Free Press on May 24, 2019. The following edited version is republished on Global Voices under a content partnership agreement.

Chinese authorities have reportedly detained documentary filmmaker Deng Chuanbin after he tweeted an image of a liquor bottle labelled “64” – a reference to the date of the Tiananmen Square Massacre which occurred on June 4, 1989.

The liquor bottle was designed in 2016 to commemorate the 27th anniversary of June 4. The liquor was called “8 wine 64″. The pronunciation of the word “wine” in Putonghua is the same with the word “9”. The bottle label carries the image of “Tank Man” with the description “Never forget, never give up”. It also specifies that the wine comes from Beijing, with 64% alcohol and has been stored for 27 years.

Fu, Zhang and Luo's trial took place at the Chengdu Intermediate People’s Court in April. They were respectively handed a three-year prison term with four to five years in suspension. Chen is still under arrest as he refused to plead guilty.

Despite the suspended sentence, the three are still under surveillance:

Arrest for a retweet

Ahead of the 30th anniversary of June 4, filmmaker Deng Chuabin has become the latest victim related to the 64 liquor bottle. Sichuan police arrested Deng at his home in Yibin last Friday, hours after he retweeted a Twitter photo of 64 liquor bottle, according to the NGO coalition, Chinese Human Rights Defenders (CHRD).

The filmmaker received a phone call from police 30 minutes after tweeting the image despite quickly deleting the post, said CHRD. Police seized three mobile phones, a computer, laptop, iPad, memory cards and compact camera while at his home. Deng is reportedly being held in Nanxi District Detention Centre for “picking quarrels” – a charge frequently leveled against critics of the government.

Update on #Deng Chuabin: On May 20, 2019: Deng's father was summoned to the police station at Peizhi town. A few men followed him back home and took video and photos in their house. They search Deng Chuabin's room for more than an hour and took away 20 electronic items including battery chargers. They even took away the electronic wire of their rice cooker. On 21, the police station told Deng's parent not to employ lawyer for Deng.

Deng, also known as Huang Huang, is an independent filmmaker who has collaborated with Beijing artist Ai Weiwei. He claims to have previously faced intimidation by authorities, including detention in 2015 to prevent him from attending a human rights seminar in Geneva.

Next month marks 30 years since the Tiananmen Square Massacre. Each year, Chinese authorities clamp down on references to the crackdown in the lead up to the anniversary, by placing outspoken dissidents on house arrest or in detention.