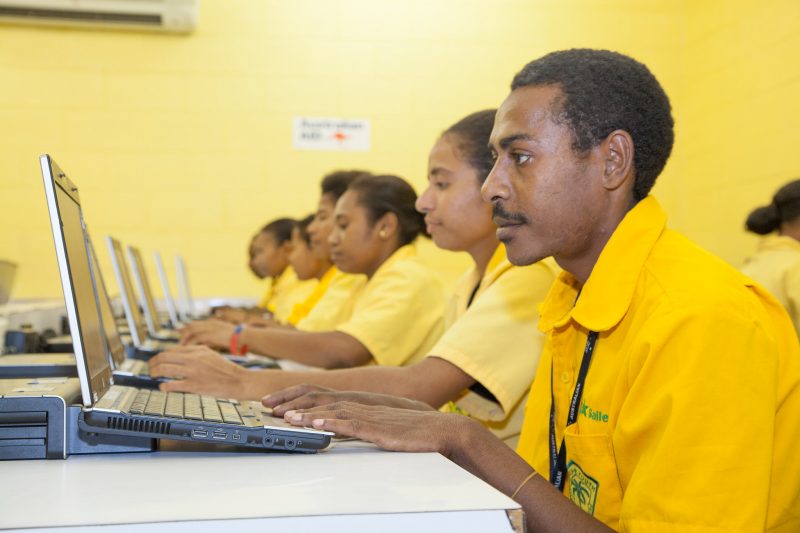 Students in IT class at the Hohola Youth Development Centre. Flickr photo by Australia's Department of Foreign Affairs and Trade (CC BY 2.0)

The Papua New Guinea government has set its sights on regulating social media in order to combat the spread of online hoaxes and fake news. Critics and journalists have warned that it could lead to the curtailment of free speech.

Prime Minister Peter O’Neill has instructed the Ministry for Communications and Information Technology to review how the government can regulate social media to protect citizens affected by the circulation of fake news.

“It is destroying our people and destroying our society. We’ve lived in peace and harmony for thousands of years without social media,” he said during a media briefing.

He cited a recent incident in which rumors spread on Facebook that multiple girls and women in the town of Port Moresby had been kidnapped, and that the perpetrators had been apprehended by police. In response, a large crowd of people gathered outside the local police station, clamoring for information and justice for the girls and women. The alleged kidnapping was later confirmed to be a fabrication.

Prime Minister O'Neill seemed particularly interested in finding ways to hold Facebook accountable for its role as a catalyst for the spread of false information. He added in a media interview:

They make revenue in countries like ours, but do not pay a cent in tax, and leave behind a lot of damage to communities.

Facebook does not even have a local office in Papua New Guinea, and that is an indication of how serious they are about making a contribution to our country, and to properly manage the sensitive issues that we are raising.

This is not the first time that the government has threatened to control social media. In 2018, there were reports about a government proposal to ban Facebook for a year because of issues related to fake news and privacy violations. It generated public backlash and authorities later backed away from plans to ban the popular social media platform.

O'Neill’s announcement also coincided with some members of parliament threatening to file a resolution of no-confidence against the prime minister, whom they have accused of exerting too much control over government departments. But a political crisis was averted after O'Neill secured the support of the majority and the parliament was adjourned until 28 May 2019.

The plan to regulate social media was also revealed to be more than just an anti-fake news measure after Minister for Communications and Information Technology Koni Iguan complained about the posting of “indecent graphics” of the prime minister and the attorney general. He said that his office is preparing a measure that will deal with Facebook posts like these.

Governor of Oro province Gary Juffa advised the government not to proceed with its plan:

We are all subject to abuse and gossip and rhetoric and though we maybe upset or hurt by it we need to ensure we protect the rights of our people to express themselves as that's an essential aspect of democracy is about – freedom of speech. If we have issues we can report it to the Police or take civil legal action.

Blogger Sylvester Gawi reminded O'Neill that the violence at the Boroko police station should be attributed to the “undertrained and underresourced police force that continually discharged firearm without any accountability.” He also said that the planned social media regulation is “adopted from Communist China.”

The fact is you can't control platforms were information is circulated, attempts to do such undermines the role of democracy and freedom that is enshrined under the constitution of our country.

There is a general agreement that there are a lot of people who use Facebook to spread fake news. They should be investigated and prosecuted using the cybercrime act if law enforcement has the capacity to do it.

But to ban Facebook has wide-ranging implications including direct government interference on the freedom of speech of Papua New Guineans and their right to hold their leaders to account.

Whether or not these officials are driven by political motivations, the Papua New Guinea government will hardly be alone in its desire to rein in social media. From Germany to Egypt to Singapore and beyond, laws have been approved that seek to curb disinformation and hate speech online. While some of these laws implicate the speakers themselves, others place legal responsibility on social media companies.

Germany's Network Enforcement Law, informally known as NetzDG, imposes a system through which large social platforms (mainly Facebook) are required to remove hateful content from their site within 24 hours of receiving notice, or face monetary fines. But the law has a critical flaw: it does not help companies determine what is — and what is not — actually hateful, often leaving companies to err on the side of censorship. In a similar vein, efforts to curb false information have not put forth systems for determining, by due process, what is and is not false.

Time will tell whether the Papua New Guinea's communications and information technology ministry will devise a unique solution to what has thus far been an intractable problem for governments and societies worldwide.