Journalists, YouTubers, and politicians join forces in Colombia against the killings of social leaders

Over 460 social leaders were murdered in Colombia since 2016. 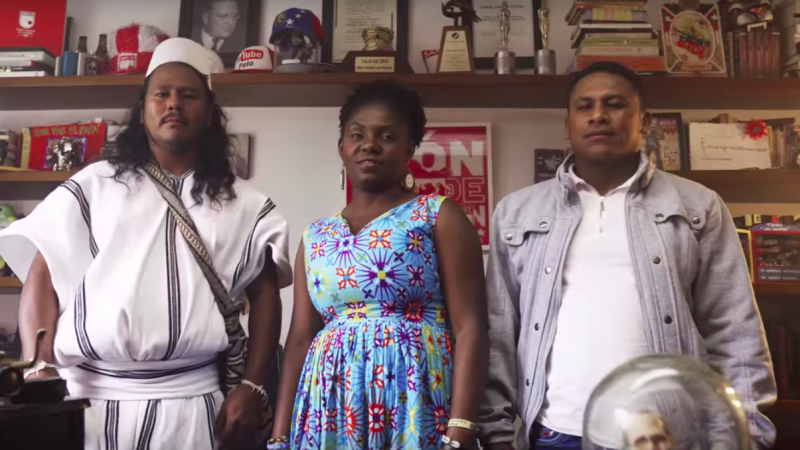 Screenshot of the video that launched the campaign #ALeaderInMyPlace. Available on YouTube through Daniel Samper Ospina's channel.

Youtubers, journalists, and politicians are joining forces against the extrajudicial killings of social leaders in Colombia with the campaign #ALeaderInMyPlace in which they open their media spaces for a leader under threat to write or speak up.

The campaign began on May 13 when journalist Daniel Samper Ospina posted on his YouTube channel a reggaeton music video featuring social leaders and famous YouTubers.

According to Colombia's Ombudsman Office, over 460 social leaders were murdered since 2016, the year when the Colombia government and the FARC, the country's largest guerrilla group, signed a landmark agreement that put an end to the five-decade conflict.

Many experts attribute the surge in violence to uneven and poor implementation of the agreements, leaving large swathes of former FARC territory vulnerable to paramilitaries and guerilla dissidents.

As the hashtag #ALeaderInMyPlace made the rounds on Twitter, a few journalists opened spaces in their columns in more traditional media outlets for social leaders. For example, Patricia Lara Salive from El Espectador published an article by Afro-Colombian economist and environmentalist Sofía Garzón, about the struggle to protect the Ovejas river from illegal mining.

In Semana, journalist Antonio Caballero gave his space to William Orozco, who works as a defender of peasant's rights, and who has had to remain in hiding away from home for almost a year after he received threats in July 2018.

Journalist Vanessa De La Torre Sanclemente gave her column in the Cali newspaper El País to Diana Jembuel, a social leader from the indigenous Misak people, who works in a local community radio. Jembuel narrates a past confrontation she had seven years ago with FARC members after they kidnapped someone from her community.

Her story shows how the Colombian government for years has left social leaders and minority ethnic communities at the mercy of guerrilla groups:

I decided to ask for help in my language, through local radio stations. I was heard and was helped by everyone […] the guerrilla fighters had intimidated our community and we couldn't let them do that. They had my partner. They were pointing a gun at him and they were yelling swearwords to us. [Then] I, single handedly, with my command staff, demanded respect and made them let him go […] Ever since I have passed that message. We're not just a few voices anymore. We're many voices united to say “enough.”

The movement was picked up by officials as well, such as the Attorney General of the Nation who has granted his online space to Goldman Environment Prize Francia Márquez. The Ambassador for the European Union in Colombia did the same with Afro Colombian leader Marino Córdoba, and on May 21 a few senators gave their seats to social leaders in the Senate:

Today with the campaign #ALeaderInMyPlace, our seats in the Second Commission fo the Senate are taken by social leaders. The Commission is being presided by Mayerlis Robles, a leader in Montes de María, who suffered an attack recently.

Bogotá-based human rights organization Dejusticia told Latin America Reports that the campaign was important for the “protection and rejuvenation of the country’s social leaders”. The campaign has generated a lot of conversation and interest, in particular when government representatives responded to it. Some voices remain doubtful, however, as this is only a very small effort in comparison to what is really needed to end the threats against social leaders. Twitter user David Racero summarized it this way:

What if Congress and Councilpeople in Bogotá that are not particularly under threat give the armoured vans they use as a taxi to social leaders and human right defenders whose lives are in danger and only count on a cellphone and a bulletproof vest?