30 years after the Tiananmen Massacre: The troubled history of the Goddess of Democracy

the statue was crushed by tanks, replicas appeared in Hong Kong 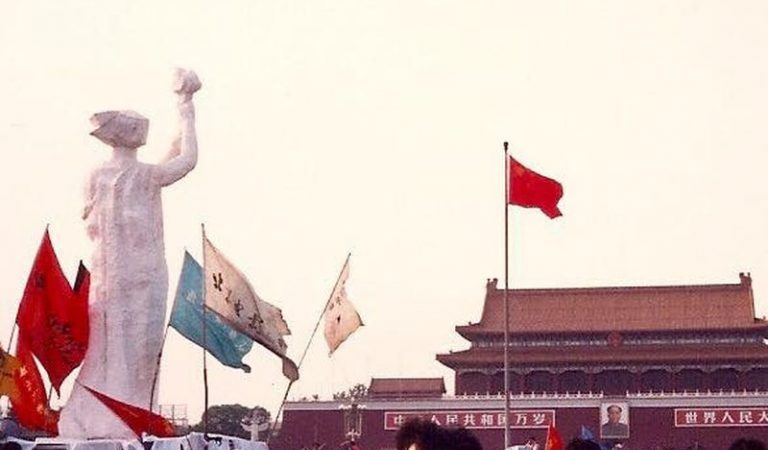 The following post is originally written by Kris Cheng and published by Hong Kong Free Press on 19 May 2019. The edited version is republished on Global Voices under a content partnership agreement.

The Goddess of Democracy stood for five days in Tiananmen Square in 1989 before the bloody massacre on June 4.

The ten-metre tall statue, facing the portrait of Mao Zedong hung at Tiananmen Gate, was made in only three days. It could not be attributed to one person; dozens of students from eight higher education institutions of art, music, and theatre participated in its construction.

When the statue was made, Beijing was almost ten days into martial law. Some students said that they wished to use the statue to energise and unite those in the square.

According to an account by one of the sculptors, Cao Xinyuan, the statue could only be completed in such a short time using a “thoroughly academic approach”:

They decided to adapt to their purpose a studio practice work that one of them had already made – a foot-and-a-half clay sculpture of a nude man grasping a pole with two raised hands and leaning his weight on it.

[…]The students cut off the lower part of the pole and added a flame at the top to turn it into a torch; they repositioned the body into a more upright position; they changed the man’s face to that of a woman, added breasts, and finally draped the whole figure in a robe. 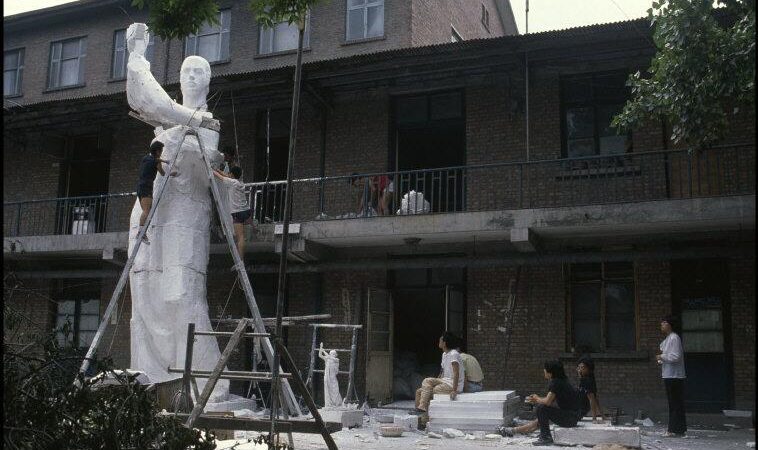 The original model of the Goddess of Democracy on May 27, 1989. Photo: Tiananmen Duizhi.

On the night of 29 May 1989, the statue was brought into the square in four parts and assembled in 16 hours. Hundreds of thousands watched the process.

A simple flower offering and an opening ceremony were held at noon on May 30. Those who were present chanted “Long live democracy” and other slogans, Cao said, and some began to sing ‘The Internationale’.

Students from the Central Academy of Music gave a performance of the Ode to Joy from Beethoven’s Ninth Symphony, then another foreign song and a Chinese song, and ended with The Internationale once again.

In a statement declaring the inauguration of the statue, the creators said they wished to dedicate it to those on hunger strike, to those in the square, to more than a million university students in China, and to those supporting them worldwide:

Although the God of Democracy, sculpted in plaster, cannot be preserved forever – we believe the darkness will pass and the dawn will come…[The original text referred to a God of Democracy instead of a Goddess.]

We strongly believe that when true democracy comes, we will come back to the square to stand up a grand, huge and permanent God of Democracy. This day will come. The Chinese people will forever put the God of Democracy in our hearts.

People Will Not Forget, a collection of reports by Hong Kong journalists who covered the democratic movement, recorded words from student creators of the statue.

A student majoring in sculpture told Hong Kong journalists that they made the statue because China needed a new innovative image, an image representing democracy, freedom, equality, and peace:

The Goddess of Democracy will represent the thoughts of the new generation of China. We need to get rid of old traditions, and get rid of the feudalistic parental system.

Another student who was involved in making the statue said it took the Statue of Liberty in New York as a reference. The Statue of Liberty has a torch in her right hand and a book with an engraving of the date of the US independence. The Tiananmen Goddess of Democracy has both hands on the torch.

But students may not have anticipated the reaction from the Beijing government. A student said at the time:

If the government ignores public opinion and forcefully destroys the statue, it will only show the authorities’ pettiness and their anti-democratic faces.

Soon after the statue was erected, Beijing’s Tiananmen management committee said it was a violation of the rules, as well as “an insult to the national dignity and image.” People’s Daily also printed articles over three consecutive days criticising the statue.

When the People’s Liberation Army cleared the protest on June 4, the statue was quickly felled and crushed by tanks. But replicas soon appeared in Hong Kong and other places. 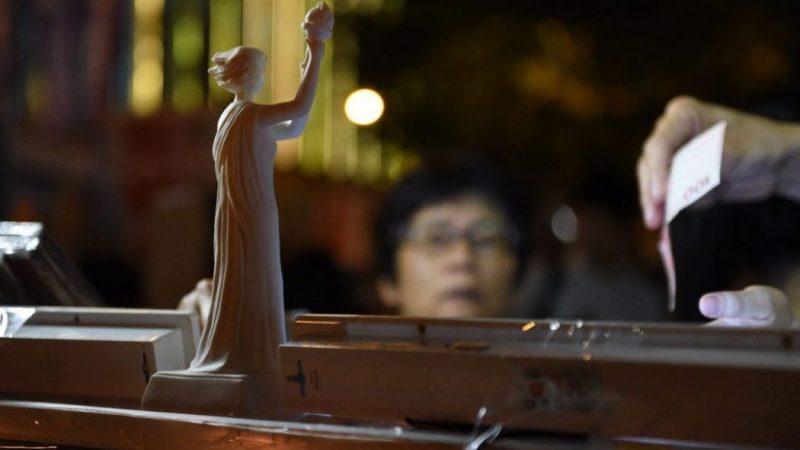 The first replica, according to the Hong Kong Alliance in Support of Patriotic Democratic Movements of China, was made on 18 June 1989, by more than ten artists and 60 students from the Hong Kong Academy for Performing Arts. It was created so people in Hong Kong could visit Victoria Park in Causeway Bay and mourn the dead. However, the creators were unable to find a permanent home for this replica, and – by the end of 1989 – it had been dismantled.

Another replica was made with barbed wire in the early 1990s, which was used in commemorative events during Ching Ming Festival, Mid-Autumn Festival, as well during the anniversary of the massacre.

But the most prominent replica may be the one created with fiberglass in 2004. At 2.4 metres tall, it has been used during candlelight vigils to commemorate the anniversary of the massacre. 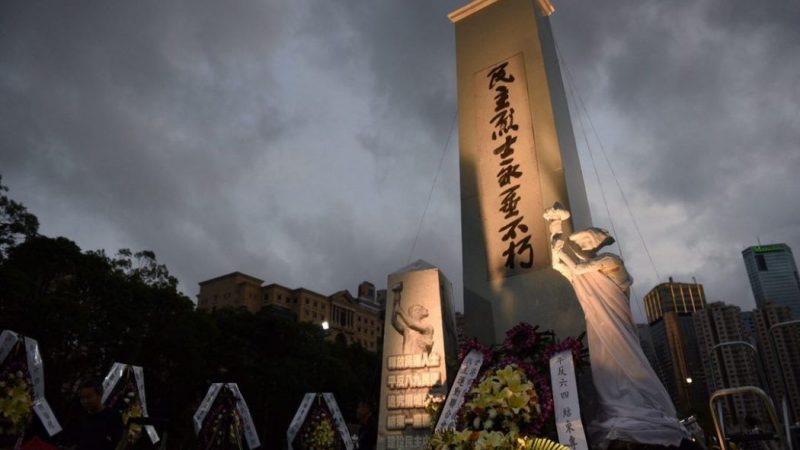 A smaller replica was made in 2009 – on the 20th anniversary – and was publicly displayed at the Hong Kong Polytechnic University. Similar statues were also displayed in cities in Taiwan, the US, Canada, and Australia. Other than replicas, Hong Kong also hosts another Goddess of Democracy statue inspired by the one made in1980.

In 2010, Chen Weiming, a Chinese-born New Zealand artist, created a new Goddess of Democracy statue, which was shipped to Hong Kong.

Controversy ensued when the Alliance displayed it in a public area of the Times Square mall in Causeway Bay on May 29, as the authorities said the statue did not have an “entertainment” license to be displayed. The police arrived and took it away. Following public pressure, the statue was eventually returned to the Alliance and displayed in Victoria Park. 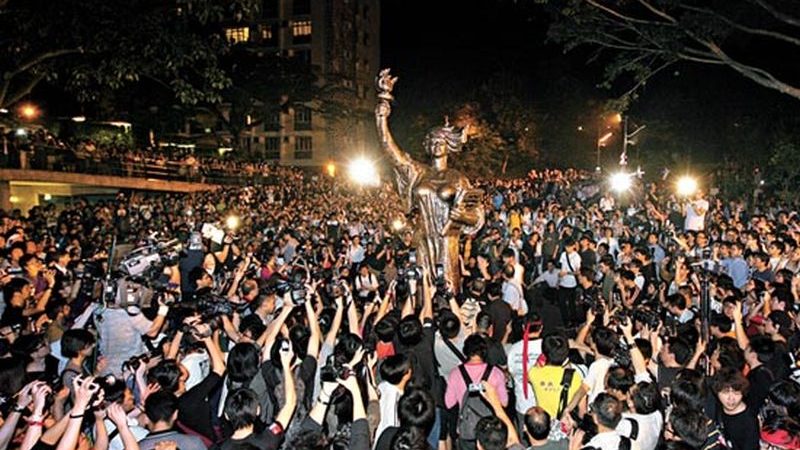